Our score was salvaged in the end by Nick Pope’s heroics at Anfield, where he made 6 saves in pursuit of the clean sheet.

Coufal and Justin also managed double-figure returns and there were lots of points around in defence, generally.

It proved a costly mistake to prioritise getting De Bruyne in over a Man City defender.

The logic was there in bringing in the Belgian for captaincy but a hamstring injury just before the hour mark against Aston Villa saw his Double Gameweek end early.

He attempted 6 assists during the Gameweek; with only Mané and Mount (each 11) offering more.

It was a poor showing across the midfield, with no goals from any of the five; an assist from Bruno Fernandes was the only other return. 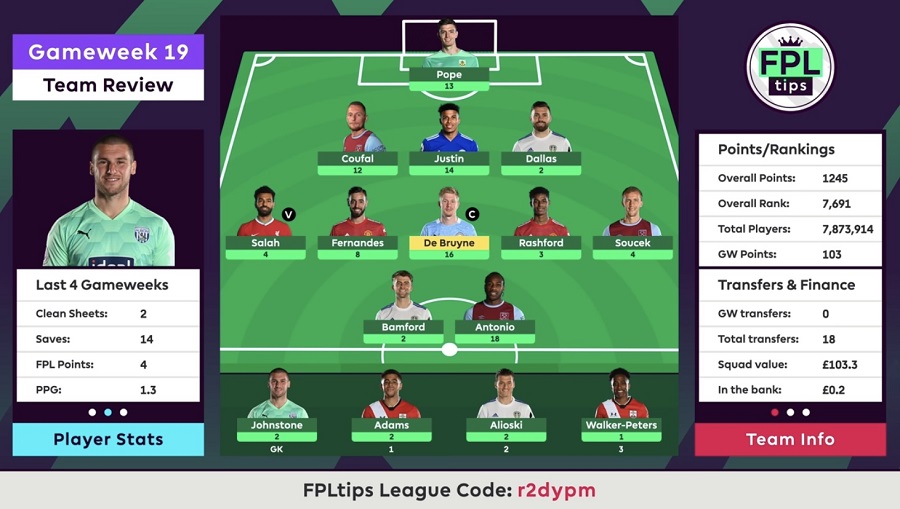 Rashford and Salah both had their minutes managed, only making cameos in their second fixtures.

Liverpool have now scored just a single goal across their last 5 league matches and are without a win in that time.

The decision to bring in Antonio gave the score a much-needed boosted, with the West Ham talisman scoring and collecting maximum bonus points in each of his two matches.

It was a disappointing week for the Leeds and Southampton assets, who were reduced to just a single Gameweek and each suffered defeats.

To make matters worse, Johnstone missed out on West Brom’s first fixture of the Double Gameweek after a positive COVID-19 test.

So, the Bench Boost has to go down as a failure in the end with hindsight but I do still stand by the logic behind playing it.

It helped to avoid a bench dilemma between the two Double Gameweek goalkeepers and looking at the fixtures beforehand, on paper, maybe Johnstone would have got the nod over Pope.

In the current climate, just getting 15 players out who all feature is a minor success in itself.

So, let’s move on to the transfer plans ahead of Tuesday’s Gameweek 20 deadline:

The FA Cup games over the weekend may have implications on future Gameweeks, so it still feels a little early to be deciding on transfer plans.

However, with De Bruyne looking set to miss between 2 and 3 weeks with a hamstring injury, he’ll have to make way.

There are a bunch of possible options to replace him and yesterday’s Watchlist episode looked at three contenders in Maddison, Sterling and Grealish.

Having an additional captaincy option to use alongside Bruno Fernandes is ideal and Sterling is the man who most fits the bill in that sense.

But after watching Liverpool lose 1-0 to Burnley, a return straight back to Heung-Min Son could now be on the cards.

It wasn’t just the late penalty; it was the number of occasions where Burnley were able to play a long ball and cause problems. 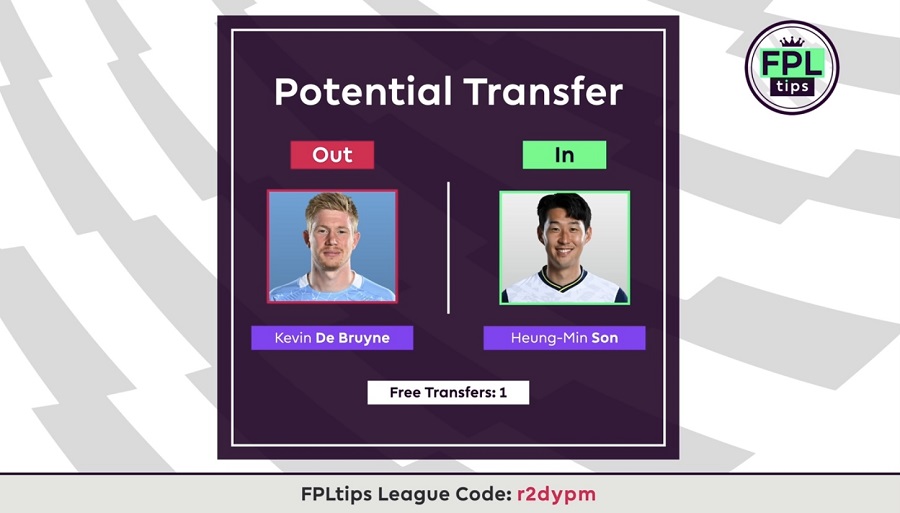 We’ve already seen Son time his run to perfection to score at Anfield back in December.

No FPL midfielder has had more than 6 big chances over the last 4 Gameweeks.

The South Korean can provide a captaincy option in Gameweeks 21 and 23 against Brighton and West Brom.

So, as is often the case – no transfer has been made as of yet and the plan is to wait until after the FA Cup matches to decide but it is most likely to be Son who comes in.

Only Man City, West Ham (each 1) and Arsenal (0) have conceded fewer goals in their respective last 4 matches.

West Ham have kept 3 clean sheets in their last 4 matches and face a Crystal Palace side that have failed to create a single big chance in that time.

Dallas keeps his place alongside Coufal, as Leeds take on a Newcastle side with just 1 goal to their name over this period; only Liverpool have fared worse – with 0.

It’s a close call for the remaining spot in defence but having kept back-to-back clean sheets, Justin is likely to get the nod.

Everton have scored 5 goals in their last 4 matches, while only Newcastle (2) and Crystal Palace (0) have fashioned fewer than their 3 big chances.

There would be a temptation to sell Salah were it not for the De Bruyne injury taking priority; Liverpool have failed to score in their last 4 matches.

They Reds have missed 7 big chances in that time, with Salah responsible for three of them.

Rashford had a very underwhelming Double Gameweek but a home fixture against Sheffield Utd offers him the chance to redeem himself.

The Blades will be without John Egan, who picked up his fifth yellow card of the season against Spurs.

They’ve conceded 17 goals in 7 matches against the ‘big six’ and Leicester this season; an average of 2.4 per game.

There’s a dilemma between Soucek and Adams but it’s the Saints forward who has the place for the time being.

Although he has missed 3 big chances in his last 4 matches.

All five of Soucek’s goals this season have come in matches that Antonio hasn’t started.

Southampton have hardly set the world alight in attack, with just 1 goal in their last 4 matches but they are expected to welcome back Danny Ings for the meeting with Arsenal. 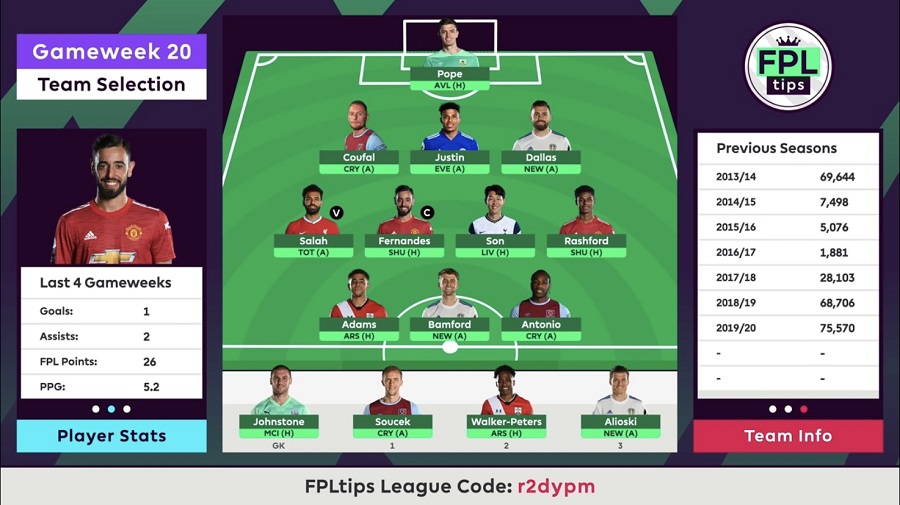 Bamford has had 3 big chances in the last 5 Gameweeks to rank behind only Cavani, Watkins (each 4) and Lacazette (6) amongst forwards.

Newcastle have shipped 8 goals over that period, with only Chelsea (9), Wolves (10) and West Brom (14) faring worse.

With De Bruyne out of the picture, there’s surely only one man to consider for captaincy in Gameweek 20.

With a goal and 2 assists over the last 4 Gameweeks, Bruno Fernandes has averaged 5.2 points per game.

No player, across all positions, has landed as many as his 9 shots on target in that time, while only Mané (14) and Mount (17) have produced more than his 12 attempted assists.

BEFORE YOU GO… Our official Daily Fantasy Sports Partner, FanTeam, are offering all NEW customers FREE ENTRY to this week’s Gameweek 20 Fantasy Premier League contest, which has a £9,000 guaranteed prize pool.

Simply register for your free account here, or by clicking the banner below and once you’ve signed up, you’ll automatically receive a FREE ENTRY to this Tuesday’s Gameweek 20 Weekly Monster, which has a guaranteed prize pool of £9,000 – with around £1,000 going to the first place winner!