There’s still one more game to be played but Gameweek 19 has been a cruel one so far, with the goalkeeper and each of the defenders conceding just the 1 goal.

Aurier picked up an assist but he was massively overshadowed by Trent Alexander-Arnold, who was directly involved in all 4 goals during that shocking 4-0 win over Leicester.

It’s absolutely heart-breaking to have sold him last Gameweek, especially considering that he’d been in the team since Gameweek 1 but very well played to those who kept faith in the Liverpool right-back.

He’s always had a game like that in him, with the amount of chances he creates and his deadly set piece deliveries but it was a huge surprise to see it come away from home against one of the best defences in the league this season. 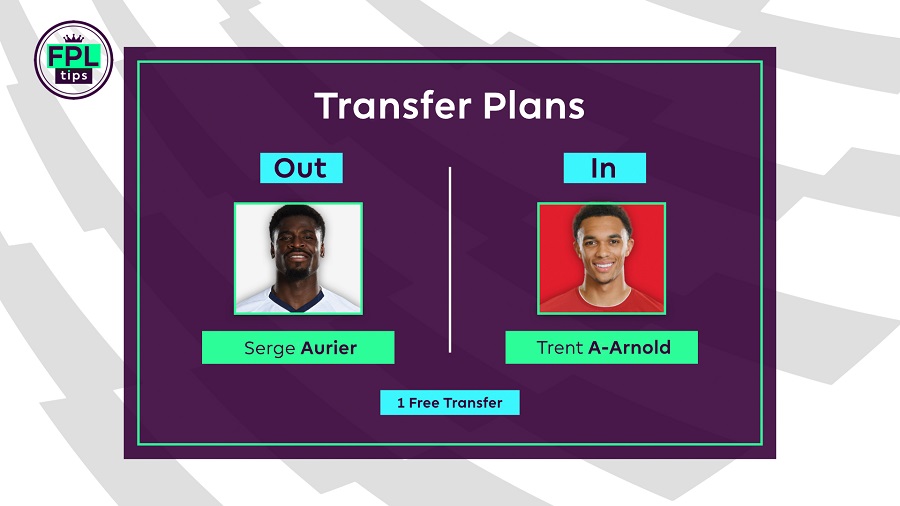 On a more positive note, keeping faith in Sadio Mané somewhat paid off, though the Senegal international did miss 2 big chances against the Foxes.

Bringing Dele Alli in ahead of Pogba also proved to be a good decision.

Vardy and Abraham each failed to score and the Chelsea forward was only afforded 1 effort at goal against Southampton but it was deemed to be a big chance missed.

So, it’s over to De Bruyne and Jiménez to save the day but as things stand, a below average score of 34 points has seen a drop in rank down to 69,725.

You may have already guessed what this week’s move will be; Trent Alexander-Arnold has already come straight back in and reluctantly, Serge Aurier has had to make way.

Selling Heung-Min Son last Gameweek meant there was enough money in the bank to make that move with 1 free transfer.

Here’s how the rest of the team is shaping up for Gameweek 20:

Pope has conceded just 1 goal in the last 3 Gameweeks, buying him some more time ahead of two home fixtures in Gameweeks 20 and 21.

Although they face Man Utd on Saturday, Burnley have kept 5 clean sheets at home this season; more than any other side.

Alexander-Arnold and Söyüncü will definitely make the XI but it’s a close call between Lundstram, Kelly and Rico for the remaining spot in defence.

Although they have a tough fixture against Man City, the Blades rank 1st in the league with a total of just 2 big chances conceded over their last 4 matches.

Lundstram also has a clear advantage when it comes to attacking threat; no defender has had as many as his 6 big chances this season.

Maddison comes back into the XI in the hope that Leicester can produce a reaction to that heavy defeat to Liverpool.

No side have conceded more goals than West Ham (10) across the last 4 home matches.

Dele Alli looked tired after the win over Brighton but with Son still unavailable, Mourinho may not have the luxury of being able to rest him.

The forward line could maybe do with freshening up in the near future, with Abraham having failed to find a return in the last 4 Gameweeks.

But Arsenal have shipped 8 goals in their last 4 home matches, with only West Ham (10) faring worse. 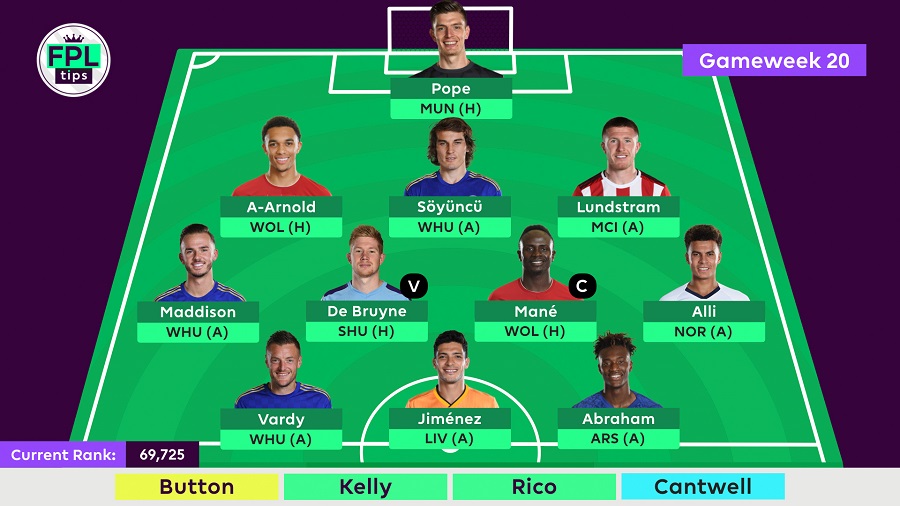 Brendan Rodgers has previously hinted at giving Vardy a rest at some point over Christmas but can he still afford to after suffering two heavy defeats in a row?

There’s the option to bench Jiménez in favour of either Kelly or Rico, with Liverpool having kept 3 clean sheets in a row but we’ll have to wait and see how he gets on against Man City before making that decision.

After their 4-0 win, Liverpool options are likely to be heavily backed for captaincy in Gameweek 20.

Sadio Mané came close on two occasions against the Foxes and has been very consistent at Anfield this season, so he’ll take the armband here.

He’s amassed 5 goals and 5 assists in his 8 starts at home this season, at an average of 8.1 points per game.

There’s another £50.00 in FREE cash to be won in our FPLTips’ fantasy contest over on the Starting 11 app this Sunday.

Once you’ve downloaded the app, head on over to the ‘Mini-League‘ tab and there you’ll see ‘FPLTips‘ free entry league for ‘Sunday December 29th‘ – it’s that simple.