Mané and De Bruyne are options to consider for captaincy in Gameweek 21, but it’s Leicester City’s Jamie Vardy who is likely to take the honours.

Gameweek 20 could not have started out much worse, with a number of players seeing rotation.

Kelly and Rico came in to replace Söyüncü, who was rested, and Lundstram, who failed a late fitness test but the move to bring back Alexander-Arnold immediately paid off.

Vardy’s absence saw Cantwell come into the team, though he only made a short cameo off the bench himself, as did Maddison.

Mané and De Bruyne very much saved the day on Sunday, helping their respective teams to wins over Wolves and Sheffield Utd.

Upfront saw yet another rest, this time for Jiménez, while Abraham fired a late goal that will likely save his place in the team for at least another Gameweek.

After a terrible start, with just 4 points from Saturday’s games, a score of 60 points wasn’t too bad in the end and sees just a small drop in rank down to 61,181.

With the squad looking fresh for the most part, after so much rotation, the plan is to roll the Free Transfer and possibly look to move on Pope or Dele Alli the following Gameweek.

Here’s how the team is shaping up for Gameweek 21:

Pope faces an Aston Villa side that suffered a 3-0 defeat to Watford on the road in Gameweek 20.

They’ve scored just 3 goals over their last 4 away matches, while only 4 teams were afforded fewer than their 5 big chances.

Söyüncü and Kelly will lineup alongside Alexander-Arnold in defence, with Lundstram remaining a doubt ahead of the visit to Anfield.

Leicester will be expected to field their strongest team after making 9 changes for the win over West Ham.

Crystal Palace have conceded just 4 goals in the last 6 Gameweeks, with only Liverpool (2) faring better.

After his rest against West Ham, Maddison should come back into the XI to face a Newcastle side that have shipped 6 goals in the last 2 Gameweeks.

De Bruyne ranks top amongst midfielders for big chances created (4) and shots on target (8) over the last 4 Gameweeks, ahead of Everton’s trip to the Etihad.

No midfielder has had more big chances than Mané (5) in the last 6 Gameweeks, while Dele Alli ranks joint-4th with a tally of 7 efforts on target.

Vardy and Jiménez should be well-rested for their respective trips to Newcastle and Watford.

The Mexico international has been directly involved in 9 goals (5 goals, 4 assists) during the last 10 Gameweeks; with only Mané (10) and Vardy (11) contributing to more in that time. 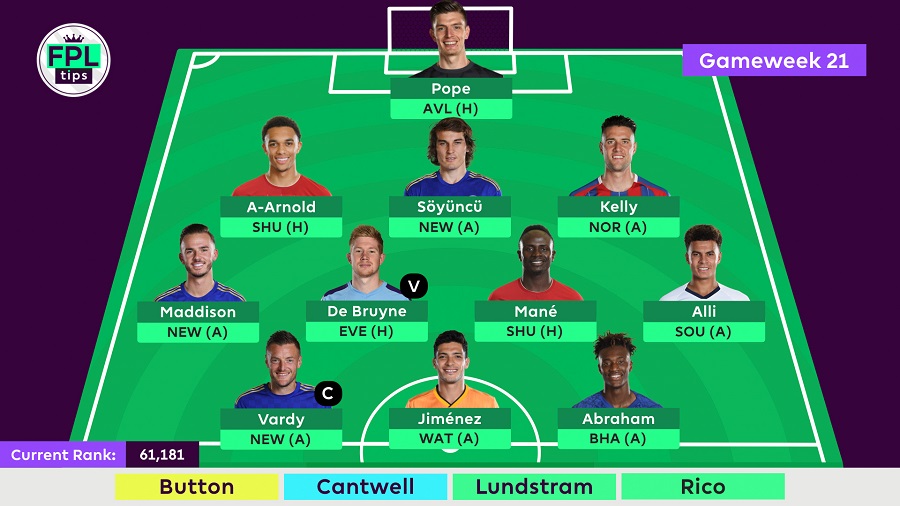 Abraham has only provided 3 FPL involvements in the last 6 Gameweeks but ranks top amongst forwards with 19 shots inside the box during that period.

Only Rashford (5), McGoldrick and Jesus (each 6) have been afforded more than his 4 big chances.

Mané and De Bruyne are options to consider for captaincy, due to their impressive form and favourable home fixtures but it’s tempting to back Jamie Vardy, who looks assured of a start against Newcastle.

The recent defeat to Liverpool saw him fail to record a goal or assist for the first time in 11 Gameweeks and he amassed 12 goals and 4 assists over that run, averaging 8.9 points per game.

Only Villa (8) and Leicester themselves (9) have conceded more goals than Newcastle (7) in the last 4 Gameweeks and they rank joint-4th worst for big chances conceded (9) in that time.

That’s right, they’re so confident you’ll love Football Index that they’ll give you your money back if you don’t like it. Half a million Traders have already profited from their platform, and now it’s your turn.

Download Football Index on iOS or Android today and buy shares in over 3,000 footballers that you can add to your portfolio.

PUT YOUR FANTASY PREMIER LEAGUE SKILLS TO GOOD USE