Fantasy Premier League’s Gameweek 22 got off to a rough start when Fabianski was forced off with a recurrence of his hip injury after just 14 minutes against Sheffield Utd.

Leicester really seemed to miss the injured Ndidi as they suffered defeat to Southampton, conceding 4 big chances to their opponents; with only Aston Villa (6) allowing more during the Gameweek.

Maddison saw his late assist ruled out by VAR but the move to bring in Richarlison for Dele Alli got off to a great start, after the Brazilian took his goal well to earn Everton the win over Brighton.

Vardy failed to record a shot against Southampton but provided a perfect cross to set up the Foxes’ opening goal.

Dubravka somehow denied Jiménez a headed goal from very close range but Abraham netted his 13th of the season in Chelsea’s 3-0 win over Burnley.

The plan was to save the free transfer this Gameweek, with a view to bringing in either Robertson or Salah with 2 moves next Gameweek.

However, with Fabianski facing a couple of weeks on the sidelines, Southampton goalkeeper Alex McCarthy has come in with the free transfer this Gameweek.

Saints have improved defensively of late, as discussed in this week’s Watchlist episode and that move also has the benefit of freeing up funds. 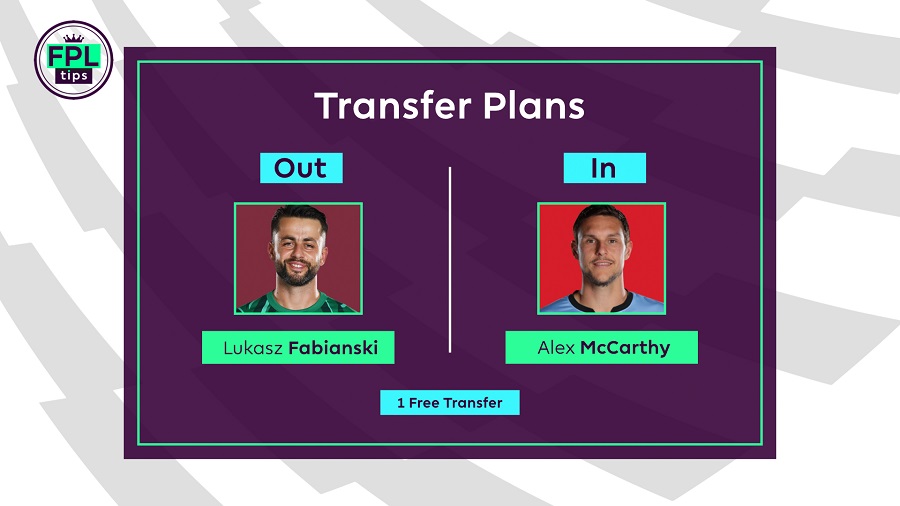 It will mean spending 4 points to bring in the 3rd Liverpool asset next Gameweek but, assuming Fabianski misses the next 2 Gameweeks, McCarthy only really needs to return 2 points per game to break even.

We’ve got one final week to assess which Liverpool player to bring in and here’s how the team is shaping up for Gameweek 23:

McCarthy begins his run in the side by welcoming Wolves, who’ve only managed 5 goals in the last 4 Gameweeks, despite earning 10 big chances.

Southampton remain undefeated in their last 5 matches and have conceded just 3 goals in that time.

Alexander-Arnold faces a very hit and miss Man Utd side, who’ve scored just once in their last 4 trips to Anfield in all competitions.

Söyüncü is up against a Burnley side that have mustered up just 3 goals in the last 6 Gameweeks, with only Bournemouth (2) managing fewer.

Arsenal will be without the suspended Aubameyang for the meeting with Sheffield Utd, boosting Lundstram’s chances of a clean sheet.

The Blades have kept 3 clean sheets in the last 6 Gameweeks, with only 4 teams shipping fewer than their 5 goals conceded.

It’s difficult to find space for Cantwell in the starting XI, despite Norwich hosting a struggling Bournemouth side.

Maddison has just 1 return in the last 6 Gameweeks but he’s up against a Burnley side that have suffered 4 consecutive defeats.

They rank joint-7th worst with a total of 8 goals conceded in that time, while only 4 teams have allowed opponents more big chances (12).

De Bruyne has found a return in 5 of the last 6 Gameweeks, amassing 3 goals and 6 assists over that period, to average 8.8 points per game.

Crystal Palace are one of only 4 teams who’ve failed to keep a clean sheet during the same timeframe and they rank 7th worst with a tally of 11 big chance conceded.

Mané has returned points in each of Liverpool’s last 4 home matches, amassing 3 goals and 3 assists, to average 10.0 points per game.

Man Utd have conceded in 10 of their 11 away matches this season, shipping a total of 15 goals on the road.

Over the last 4 Gameweeks, Richarlison has stepped up with 2 goals and 1 assist for Everton to cement his place alongside Calvert-Lewin in attack under Carlo Ancelotti.

Only Salah (12) has fired more than his 11 goal attempts in that time, amongst midfielders, while only Mané and Martial (each 6) can better his 5 efforts on target.

Vardy has failed to return points in just one of his last 12 league appearances and faces a Burnley side that are struggling for form.

The Foxes have only scored 6 goals in the last 4 Gameweeks, with 4 teams managing more, but they rank 3rd best with a total of 23 shots on target.

It’s been a disappointing couple of weeks for Raúl Jiménez; despite ranking top amongst forwards for big chances created this season (10), he’s failed register a single attempted assist in his last 2 outings. 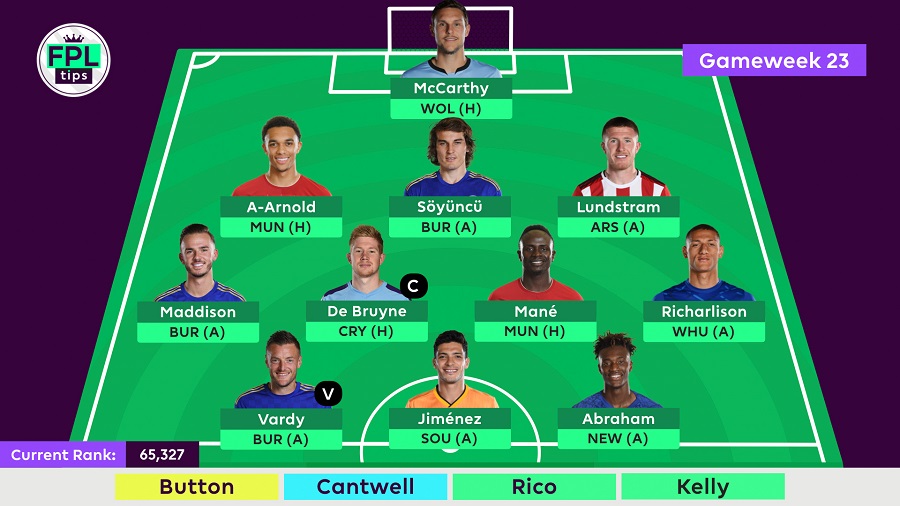 Abraham has netted 2 goals in the last 3 Gameweeks, with only Jesus (12) and Ings (16) firing more than his 11 shots inside the box.

Chelsea face a Newcastle side struck down by a number of defensive injuries and only Aston Villa (15 to 11) have conceded more goals in the last 6 Gameweeks.

It’s shaping up to be a battle between Vardy and De Bruyne for captaincy once again but Man City have looked the much stronger attacking force over the last 4 Gameweeks.

They’ve scored 12 goals compared to Leicester’s 6 in that time, with De Bruyne playing a hand in 5 of those himself.

So, it’s hard to look past the consistency of the Belgian creator for Crystal Palace’s visit to the Etihad this weekend.