With promising upcoming fixtures for Wolves and 3 assists in the last 4 Gameweeks, Adama Traoré is likely to come in with the free transfer this week

Finally! We can say goodbye to Gameweek 26, but it was once again down to the Liverpool assets (Alexander-Arnold and Robertson) to earn the points in defence.

The free transfer saw Enda Stevens come in to replace John Lundstram, who had seemingly lost his starting place but in typical FPL fashion, the “Lord” came off the bench to score the winner!

Grealish created 2 big chances during defeat to Spurs and was unfortunate to only come away with the 1 assist, while Salah’s struggles away from home continued against Norwich.

Jiménez missed 2 big chances in the draw with Leicester, so it was down to Danny Ings to pick up the points amongst the forwards.

A score of 44 points so far is around the overall average and has seen a small drop in rank down to 167,899.

With promising upcoming fixtures for Wolves and 3 assists in the last 4 Gameweeks, Adama Traoré is likely to come in with the free transfer this week.

Wolves are one of only 4 teams with a guaranteed match in Gameweek 31, as things stand, so the move will also help to keep open the option of saving the Free Hit chip for the Double Gameweeks.

There’s a bit of dilemma with regards to who should make way between Maddison and Grealish. 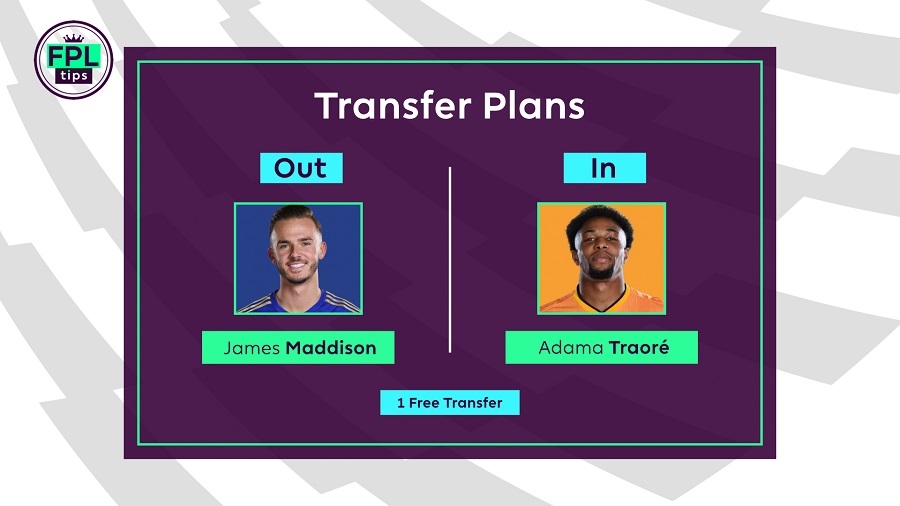 The latter has the form but doesn’t have a fixture in Blank Gameweek 28, while the Leicester midfielder has created plenty of chances despite failing to return an assist since Gameweek 16.

For now, the plan is to go with form on this occasion and say goodbye to James Maddison ahead of a meeting with Man City.

Here’s how the team is likely to lineup for Gameweek 27:

McCarthy faces an Aston Villa side that have only managed to score 4 goals in their last 4 away matches.

Southampton rank 4th best for shots inside the box conceded over the last 6 Gameweeks (39), despite facing Liverpool, Wolves, Leicester and Spurs in that time.

There are no changes to the back 3 (Alexander-Arnold, Stevens and Robertson), with Liverpool and Sheffield Utd both facing favourable home fixtures.

The Blades have shipped 3 goals over the last 4 matches, with only Burnley (2) and Liverpool (1) conceding fewer during that period.

West Ham have scored just 10 goals on the road this season; only ahead of Norwich – with 6.

The Canaries have, however, conceded plenty of goals in away matches; 10 in their last 6, which bodes well for the in-form Adama Traoré.

Only Salah (5) has created more big chances than his 4 during the last 4 Gameweeks and no player has earned more assists than his 3.

De Bruyne currently ranks joint-3rd for attempted assists (12) in the last 4 Gameweeks, though he still has his Gameweek 26 fixture against West Ham to play at the time of writing.

Leicester kept their first clean sheet in 5 matches after Wolves saw a goal ruled out by VAR last Friday and have conceded 11 goals in their last 4 games against ‘top 4’ sides.

Mo Salah has averaged 9.0 points per game at Anfield this season, scoring 12 goals in 12 games.

Only Maddison (17) has attempted more assists than Jack Grealish (15) in the last 4 Gameweeks and only Traoré, De Bruyne and Salah rank higher for expected assists (xA).

Aston Villa have scored 9 goals in their last 6 matches, with only 5 teams scoring more and their talisman was directly involved in 44% of them (2 goals, 2 assists).

However, all 4 of his efforts were deemed to be big chances, for which, he ranks top amongst teammates; indicating that the highest quality chances that the Foxes produce are still falling to the 33-year-old.

With an impressive history against ‘top 6’ sides, including 5 goals in his last 7 against Man City, could this be the week he ends his goal drought?

Raúl Jiménez has 3 goals in the last 4 Gameweeks and no forward has claimed more than his 7 big chances during that period.

He also ranks joint-top with tallies of 14 shots in the box and 6 on target. 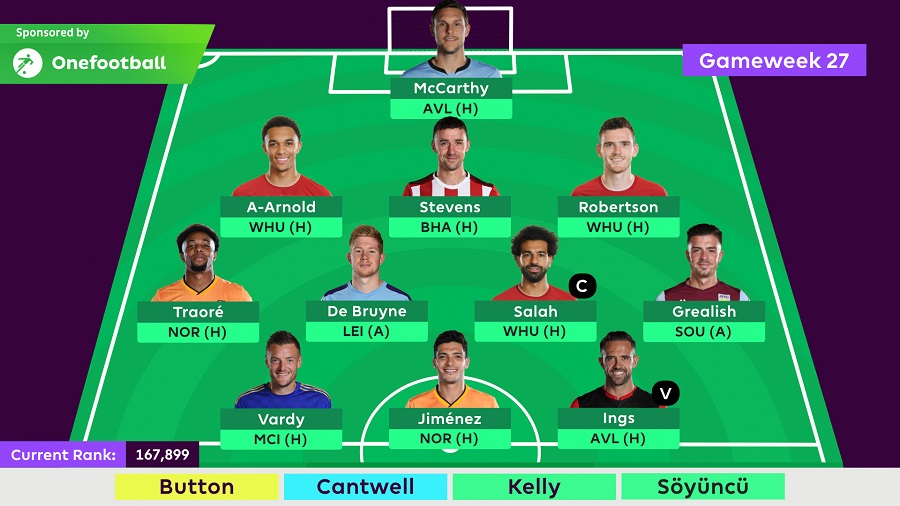 Norwich have kept clean sheets against Bournemouth and Newcastle in the last 4 Gameweeks but neither of those sides boast particularly prolific attacks.

Danny Ings returned to the scoresheet in the defeat to Burnley last Gameweek, scoring his 15th goal of the season.

He’s fired 8 shots on target in the last 6 Gameweeks, with only Firmino (9), Jesus (10) and Agüero (11) faring better amongst forwards.

Aston Villa have shipped a league-high total of 14 goals across the last 6 matches, with no side allowing more big chances (26) across that spell.

The defensive form of Aston Villa brings Danny Ings into consideration for captaincy but it’s hard to overlook the consistency of Mo Salah at Anfield this season.

West Ham have conceded 10 goals in their last 4 matches, which is more than any other team and that’s prior to their Gameweek 26 meeting with Man City.

Only Newcastle (15) and Villa (17) have conceded more than their 14 big chances during that period.