With Blank Gameweek 31 soon approaching, any transfer plans before then will involve bringing in players who have a fixture that weekend, in the hope of saving the Free Hit chip for a future Double Gameweek.

Jack Grealish was far from his usual self against Leicester and has looked like he may be carrying a bit of a knock of late. 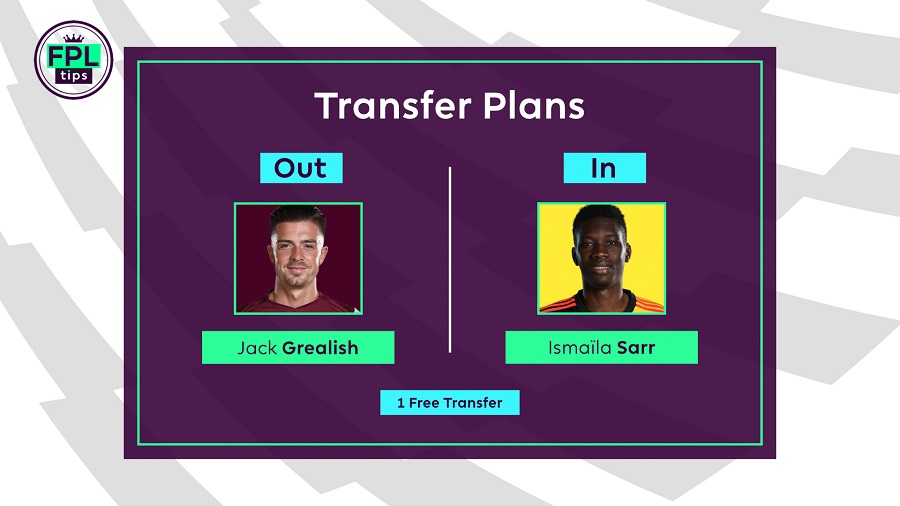 Ismaïla Sarr is the man likely to replace him, although Leicester’s recent defensive form is a concern.

But the 22-year-old has averaged 7.9 points per 90 minutes during home matches this season (4 goals, 3 assists) and Watford also welcome Southampton, Norwich and Newcastle to Vicarage Road before Gameweek 36.

Here’s how the team is likely to lineup for Gameweek 30:

Please also note that as part of our weekly contest research and planing, we compare betting sites with exclusive Premier League offers – for more info, please check out bettingonline.co.uk. Each of the betting sites they compare are regulated by the UK Gambling Commission – so you can be certain that all the bookies offered adhere to the highest standards of security.

The plan is to move Alex McCarthy on to either Foster or Pope ahead of Southampton’s Blank Gameweek 31 but not before giving him one final outing away at Norwich this weekend.

No side have managed fewer than their 1 goal scored or their 3 big chances over the last 4 matches.

Attacking defenders Alexander-Arnold and Doherty keep their places for their respective trips to Everton and West Ham, while Robertson is expected to return from his knock, replacing Söyüncü in the XI.

Everton have scored just 1 goal across their last 5 league matches against Liverpool at Goodison Park.

With Traoré expected to start in the Europa League, he could once again be at risk of a cameo this weekend, so there’s the option to bring in Cantwell from the bench as an alternative.

Although Norwich have struggled in front of goal, they’ve scored in 7 of their last 8 home matches, amassing 9 goals.

No teammate picked up more FPL points than Cantwell (38) over that run, with the midfielder earning 4.8 points per game.

There will be concern’s over Kevin De Bruyne’s availability to face Burnley even if he features against Arsenal (UPDATE: the game was postponed by the Premier League, as a precaution), given that all important Champions League 2nd leg against Real Madrid to come.

But the Belgian has directly contributed to 5 goals in his last 6 matches (1 goal, 4 assists) and was a big miss during City’s defeat in the Manchester derby.

Burnley have conceded 10 goals in their 4 away matches against the ‘big six’ this season, an average of 2.5 per game.

Mo Salah has 2 goals in the last 4 Gameweeks but rather worryingly, hasn’t been afforded a single big chance during that period.

He’s picked up just 5.2 points per game on the road this season, compared to 8.9 at Anfield.

Following the 4-0 defeat to Chelsea in Gameweek 29, Everton have shipped 9 goals in the last 4 matches, with only Aston Villa (11) faring worse. 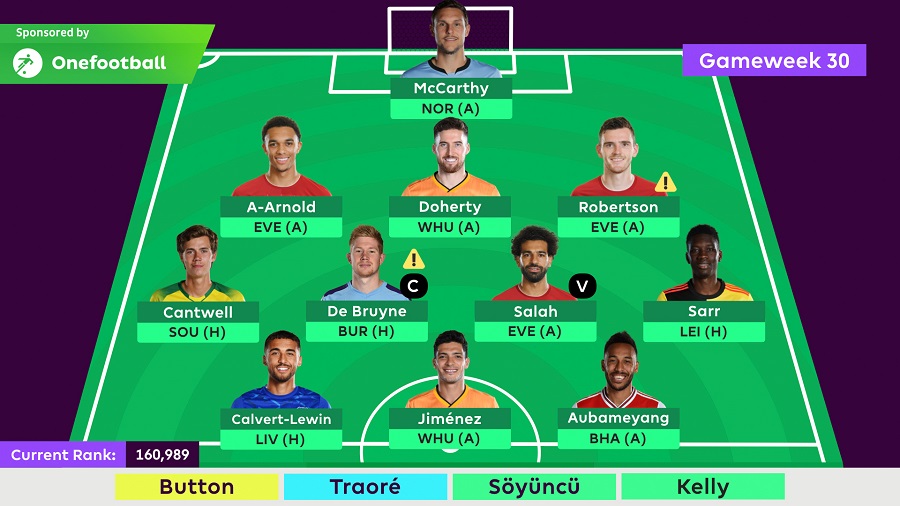 This week’s transfer target Ismaïla Sarr has 4 goals and 3 assists from 10 appearances at home.

He’s been afforded 1.02 big chances and has created 0.73 big chances, per 90 minutes, over those matches, leading the way amongst Watford teammates on each account.

The Hornets have scored 7 goals in their last 4 home matches and only Liverpool (13), Everton (15) and Burnley (16) were afforded more than their 13 big chances.

Chris Wood is likely to be the man to replace Calvert-Lewin for Blank Gameweek 31, but with an away trip to Man City for Burnley this weekend, there’s no rush to make that move early.

With 3 goals and 1 assist in the last 4 Gameweeks, the in-form Everton striker offers some insurance against the double Liverpool defence.

Although the Merseyside derby hasn’t seen many goals from Everton in recent years, Liverpool come into this one having shipped 6 in their last 4 matches.

Raúl Jiménez has 2 goals in the last 4 Gameweeks and falls behind only Jay Rodiguez and Calvert-Lewin (each 6) amongst forwards, with a tally of 5 big chances.

West Ham have failed to keep a clean sheet over the same period, conceding 7 goals; only 4 teams have fared worse.

Aubameyang is likely to remain in the side throughout Blank Gameweek 31, with a view to making him captain in Gameweek 32 against Norwich.

Brighton have only shipped 3 goals in the last 4 Gameweeks but only 5 teams have allowed opponents more than their 8 big chances.

Gameweek 30 looks like a tough week for captaincy, with a lot riding on the availability of Kevin De Bruyne.

If the Man City play-maker is available, he has arguably the best fixture amongst the premium assets, given the home advantage.

But it will otherwise be a battle between Salah and Aubameyang, although those with Sadio Mané may be tempted to give him the armband due to his superior away form this season.

Fantasy Premier League tips: Who should I captain in FPL Gameweek 6?