It looks like a tough week for FPL captaincy, with Arsenal’s Pierre-Emerick Aubameyang perhaps the most appealing big hitter on paper, at home to Norwich.

After seeing how depleted Burnley’s squad was for the defeat at Man City, Rui Patrício came in to replace Nick Pope in the final wildcard team.

Wolves secured a 1-0 win over Bournemouth to make it 6 clean sheets from their last 7 matches.

Another late change saw Matt Doherty downgraded to Romain Saïss, with those funds instead used in midfield.

2 other late changes to the initial wildcard draft saw both Heung-Min Son and Anthony Martial come into the team, replacing Jamie Vardy and Ismaïla Sarr.

Heung-Min Son saw a goal ruled out by VAR for offside and brilliantly set Harry Kane through on goal to pick up his assist but apart from those two moments of magic, the South Korean was rather worryingly staying out wide for much of the game.

The ever-consistent Raúl Jiménez made it 7 goals in 11 matches this calendar year, heading in the winner against the Cherries, while Dominic Calvert-Lewin showed some promise, despite failing to score; no player has fired more than his 7 goal attempts during the Gameweek so far.

All in all, it’s been a solid start for wildcard team, so the plan will be to save a free transfer going into Saturday’s Gameweek 32+ deadline.

Please note that all players prices and ownership percentages in this video and article were correct at the time of writing and publishing, and whilst most transfers in FPL will come down to the spin of a roulette wheel, like at www.onlinecasinosnoop.com we’ll continue to gamble with our selection and play aggressively.

Rui Patrício faces an Aston Villa side that are fighting to stay in the league and picked up a good point against Newcastle midweek.

Only Man City have attempted more efforts on target since the restart (19 to 12).

But Wolves have allowed just 4 big chances in their last 6 matches; fewer than every other team.

Only Man Utd have matched Wolves’ tally of just 2 goals conceded in the last 6 matches.

They face a Brighton side that have scored just 4 goals in that time; only Norwich (1) have fared worse.

Alexander-Arnold has picked up 2 goals and 5 assists in 8 matches against the current ‘top six’ teams, returning an average of 7.6 points per game.

Mo Salah has 8 goals and 3 assists in 11 matches this calendar year, averaging 7.9 points per game.

During the same period, Kevin De Bruyne has directly contributed to 7 goals in 9 matches (2 goals, 5 assists), returning 6.0 points per game.

Since Bruno Fernandes arrived in the Premier League (GW25), no player has scored more goals than Anthony Martial – with 6. 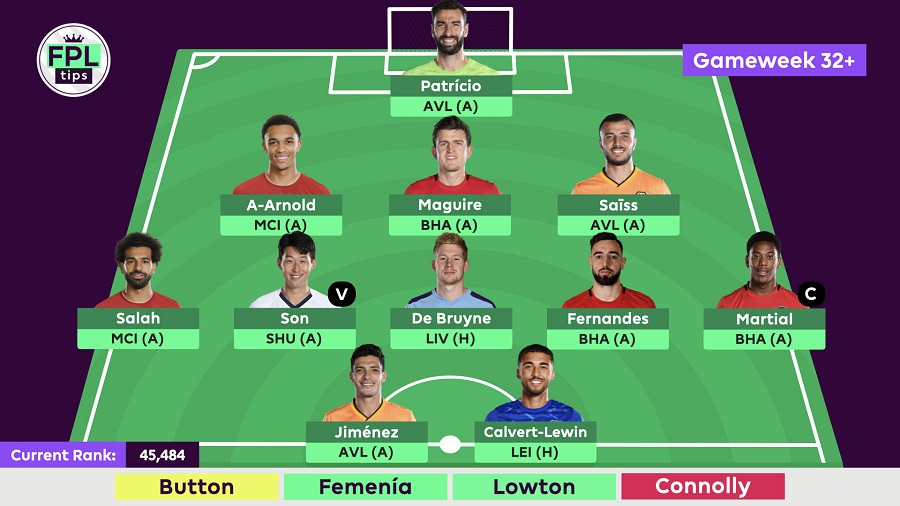 No FPL midfielder has a higher ‘expected goals’ figure (xG) than the Frenchman (3.63) during that time.

Since Mourinho took charge of Spurs in Gameweek 13, Heung-Min Son has directly contributed to 11 goals in 13 matches (6 goals, 5 assists), averaging 6.1 points per game.

Sheff Utd have shipped 6 goals in 3 games since the restart, conceding a league-high total of 9 big chances but will be boosted by the return of Dean Henderson and John Egan.

Dominic Calvert-Lewin has picked up 47 points during this calendar year; only beaten by Agüero (50) and Raúl Jiménez (60) amongst FPL forwards.

No player, across all positions, has had more big chances than the Mexican’s 12 during that period.

Everton have started slow since the restart, scoring just once so far but only 5 teams have attempted more shots on target (8).

They face a Leicester side that have won just 2 of their last 10 league games, conceding 10 goals.

It looks like a tough week for captaincy, with Pierre-Emerick Aubameyang perhaps the most appealing big hitter on paper, at home to Norwich.

For those of us without the Arsenal forward, the ever-consistent Raúl Jiménez could be a safe option.

Heung-Min Son scored in the reverse fixture against Sheff Utd and could once again find some joy on the counter, if Mourinho sets his side up as he did against West Ham; particularly late on in the game.

But it’s hard to look past Man Utd’s attack at the moment, with 4 goals since the restart; only Man City have taken more shots on target (19 to 12) or fashioned more big chances (8 to 7).

Anthony Martial has had 4 big chances in the last 2 Gameweeks; the most of any player.

BEFORE YOU GO…. There’s a massive €50,000 Bundesliga fantasy contest taking part this Saturday, on Fanteam.com.

From Saturday’s 9 Bundesliga fixtures only, pick what you think will be the highest scoring 11-man lineup, just like you would using your Free Hit or Wildcard on FPL.

Sign up via the banner below and you’ll receive a FREE €2 entry, courtesy of the Fantasy Football Pundits – NO DEPOSIT REQUIRED!