We’re midway through Gameweek 32+ as things stand and it’s been another good week for clean sheets so far.

Patrício and Saïss were resolute in the 1-0 win over Villa, while Maguire helped his side to a comfortable 3-0 win over Brighton; neither Man Utd nor Wolves conceded a single big chance.

Anthony Martial was fairly quiet following his hat-trick against Sheffield Utd, failing to register a shot or create a single chance and it was Bruno Fernandes who delivered the points; no midfielder has taken more than his 4 shots during the Gameweek so far.

A late captaincy swap from Martial to Jiménez made little difference in the end, after the Mexican was unable to get on the scoresheet.

Please note that all players prices and ownership percentages in this video and article were correct at the time of writing and publishing, with any betting odds quoted provided by esports and betting site Bookmakers.net.

With 2 free transfers available and no major changes needed in the starting XI as it stands, the plan is to quickly move on Matthew Lowton, who recently picked up a foot injury that is expected to rule him out of the match with Sheffield Utd on Sunday.

There’s £0.1m in the bank, so it’s possible to make the swap to fellow Burnley defender Charlie Taylor in one move.

Hopefully, if all goes well in the remaining Gameweek 32+ fixtures, the other free transfer can be banked.

Here’s how the team is set to lineup for Saturday morning’s Gameweek 33+ deadline:

Rui Patrício has kept 4 consecutive clean sheets, with 7 in his last 8.

Wolves have conceded just 1 big chance over 3 games since the restart.

Arsenal have scored just 3 goals in their 3 matches so far, creating a chance every 11.4 minutes; only 3 teams have fared worse in that respect.

Liverpool welcome Aston Villa to Anfield, having kept clean sheets in 6 of their last 8 home matches.

Alexander-Arnold was subbed after 73 minutes against Crystal Palace, with 19-year-old Neco Williams getting a run-out; could that be something we see more often, with the short turnaround?

Maguire has played every single minute in the Premier League this season; only De Gea has managed the same, amongst teammates.

Burnley have also managed consecutive clean sheets and face a Sheffield Utd side that have failed to score in their 3 games so far.

Only Norwich (2) and Bournemouth (1) have landed fewer shots on target than their 3.

Barring any upsets in the remaining matches, it will be an unchanged midfield with Salah, De Bruyne and Son lining up alongside the Man Utd double-up of Bruno Fernandes and Martial.

Bournemouth have shipped 8 goals in their last 4 away matches, with only Everton and Aston Villa (each 9) faring worse.

The Cherries are also the only side to concede more big chances than Aston Villa over the same period (13 to 12).

Southampton, meanwhile, have allowed more goals during home matches this season (33) than any other side.

Since the restart, only Danny Ings (26) has picked up more points than Raúl Jiménez (19) amongst FPL forwards.

The Mexican ranks 4th with a tally of 8 shots, while only Aubameyang and Calvert-Lewin (each 5) can better his 4 efforts on target. 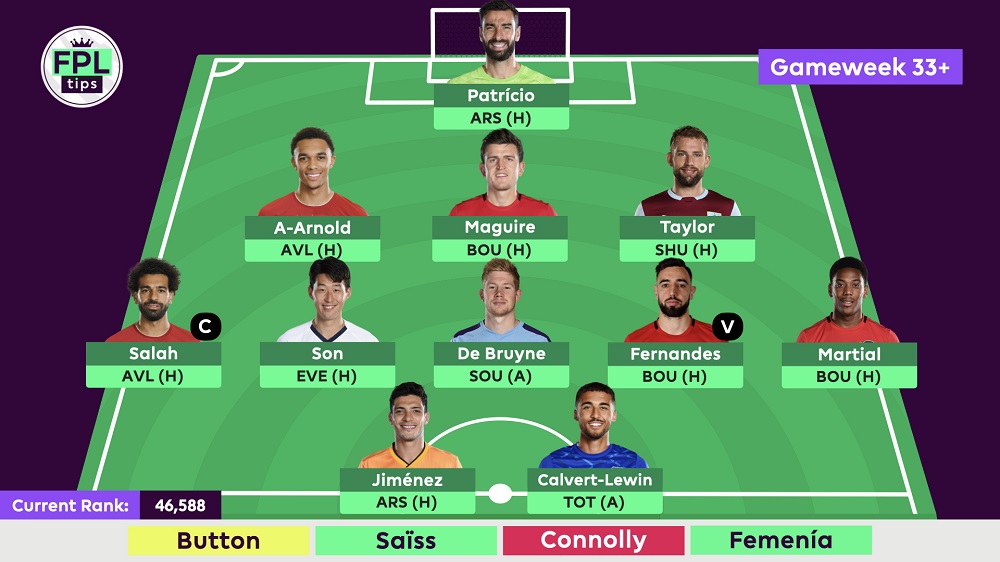 Arsenal have conceded 5 goals over their last 4 matches and no side have faced more shots on target over that period (26).

Despite shipping just 1 goal over the last 2 matches, Spurs rank joint-11th for big chances conceded – with 3.

There are plenty of captaincy options for Gameweek 33+ and on paper, a Liverpool midfielder at home to Aston Villa looks like an ideal place to go.

But if Mo Salah plays the full game against Man City, can we be certain enough that he’ll get the start on Sunday?

For now, the Egyptian has the armband but it will depend on his minutes midweek and any hints from Klopp that might appear in the press conference that follows.

After being withdrawn early against Brighton, both Bruno Fernandes and Martial look primed to start against Bournemouth in an equally favourable fixture – so it will be an option to move captaincy on to one of those two if there’s any uncertainty over Salah.

BEFORE YOU GO…. There’s a €6,500 fantasy Premier League contest taking part this Saturday, on Fanteam.com and we’d like to invite you to come and play, for free!

From Saturday’s 4 Premier League fixtures only, pick what you think will be the highest scoring 7-man lineup, just like you would using your Free Hit or Wildcard on FPL.

Sign up via the banner below and you’ll receive a FREE €2 entry, courtesy of the Fantasy Football Pundits – NO DEPOSIT REQUIRED!