There’s one final game remaining in Gameweek 33+ but so far, it’s been a bit of a rough one for FPLTips

Alexander-Arnold was the only man to keep a clean sheet, with in-form Wolves, Burnley and Man Utd defences all being breached.

Aston Villa put up a fight against Liverpool but the Reds won out in the end, with Mo Salah earning a late assist.

Bruno Fernandes earned his 2nd 15-point return in a row as Man Utd put 5 goals past Bournemouth, with Anthony Martial also on the scoresheet.

But the late decision to bring in Mahrez after his rest against Liverpool didn’t go so well; he was hauled off before the 60-minute mark, as Man City missed 5 big chances in defeat to Southampton.

Captaincy was a huge call in the end and the decision to back Salah over a Utd midfielder proved costly.

Raúl Jiménez was kept quiet in the 2-0 defeat to Arsenal, so Calvert-Lewin is the only hope of adding further points when Everton take on Spurs in the Monday night fixture.

Please note that all players prices and ownership percentages in this video and article were correct at the time of writing and publishing. All betting odds quoted were provided by Golisports online soccer bets.

No moves will be made until after the final match of Gameweek 33+ and at the moment, the most likely plan is to save a free transfer.

However, Mo Salah could be a potential transfer out, with the Golden Boot getting further out of his sight.

All eyes will be on Calvert-Lewin’s performance against Spurs but if he blanks for a 4th consecutive match, he too could find himself on the chopping block.

With relegation looking likely for Bournemouth after conceding a league-high total of 12 goals in the last 4 matches, it will be tempting to make a move for Harry Kaneshould the Spurs forward impress against Everton.

Heung-Min Son is also an option to bring back in, despite having only just sold the South Korean.

Christian Pulisic, however, would fund a move for the Spurs forward; he’s averaged 7.0 points per game since the restart and faces Crystal Palace, Sheffield Utd and Norwich in the next 3 Gameweeks.

But again, those moves are purely hypothetical at the moment and largely depend on what happens in the game between Everton and Spurs.

Here’s how the team is currently set to lineup for Tuesday’s Gameweek 34+ deadline:

Wolves conceded their first 2 goals since the restart over the weekend but only Brighton (1) have allowed fewer big chances than their 3 in the last 4 matches.

Sheffield Utd have scored 4 goals in the same period, with only Crystal Palace (7), Norwich and Bournemouth (each 5) registering fewer shots on target than their 10.

Saïss is likely to get the nod alongside Alexander-Arnoldand Maguire, to double-up on what has largely been an impressive Wolves defence since the restart.

After being rested to the bench for the defeat at St Mary’s on Sunday, De Bruyne is well-placed for a return to the starting lineup to face Newcastle in Gameweek 34+.

The Belgian has amassed 3 goals and 3 assists in his last 6 Gameweeks at the Etihad, where he’s averaged 7.8 points per game.

With 4 goals and 2 assists in the last 4 Gameweeks, Martial has averaged 10.0 points per game.

No FPL midfielder has had as many big chances as the Frenchman (4) during that period, while only Sterling (26), Pulisic and Salah (each 30) have taken more than his 24 touches in the opposition’s box.

Amongst teammates, only Bruno Fernandes (8) has struck more efforts on target than his 5.

Greenwood and Ings (each 3) are the only FPL forwards with more goals than Raúl Jiménez since the restart but rather worryingly, the Mexican ranks 10th for expected goals (1.29) amongst players in his position.

Wolves have only scored 4 goals since play resumed, ranking joint-11th for shots on target (11) and joint-13th for big chances (5). 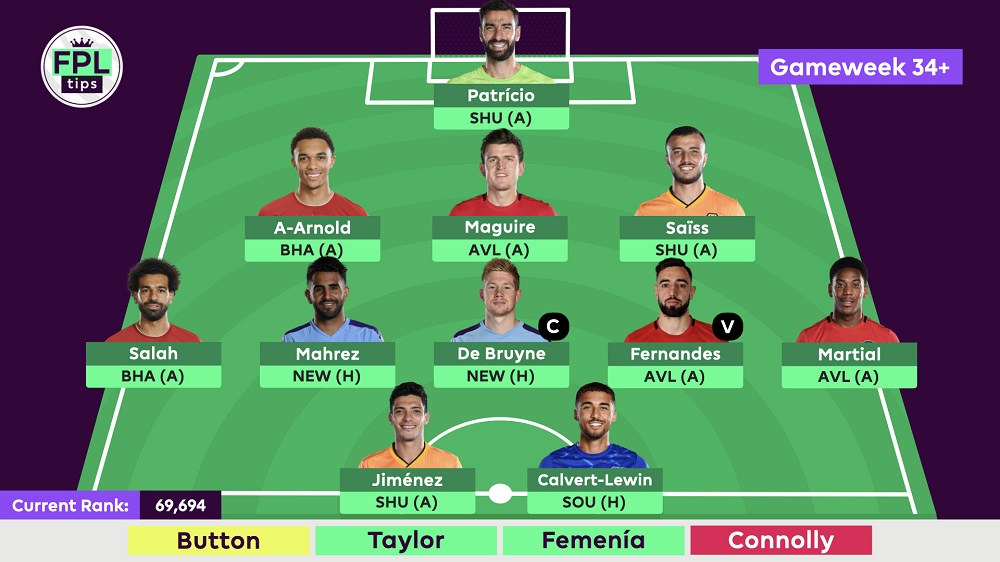 As mentioned earlier, Calvert-Lewin has also failed to impress so far, so it could soon be time to freshen up the forward line.

The Everton man ranks joint-4th with a tally of 10 shots in the last 4 Gameweeks but has failed to score or register a big chance.

The Man Utd midfielders could once again offer reliable captaincy options but Aston Villa showed against Liverpool that they’re still very much up for the fight.

Man City have scored a league-high total of 18 goals in their last 6 home matches and with a fairly high assurance of a start for Kevin De Bruyne, it’s likely to be the Belgian who wears the armband.

Newcastle have conceded 16 big chances in their last 6 away trips; with only Crystal Palace, Norwich (each 17) and Bournemouth (18) allowing more.