The Gameweek’s are coming thick and fast now, so let’s take a closer look at how FPLTips plan to line-up for FPL Gameweek 36+

Patrício and Saïss were very much the saving grace at the back in Gameweek 35+ as patience in the double Wolves defence paid off.

Alexander-Arnold did get his rest but came on for a cameo to deny Kiko Femenía a spot in the XI and the move for Lucas Digne didn’t get off to the best of starts.

He was fortunate to avoid a red card in the end, having been booked early on and was used in a centre-back role during the first half against Wolves; limiting his attacking potential.

Mo Salah was denied on 4 occasions by Nick Pope, with 2 of his efforts recorded as big chances missed.

His underlying numbers were actually very similar to hat-trick hero Raheem Sterling, who stole the show in Man City’s 5-0 win over Brighton.

De Bruyne uncharacteristically came away without a return in that match but was subbed just after the 60-minute mark, while Mahrez could have easily added a goal or two to the assist he picked up.

Faith in Jiménez was rewarded with a goal from the spot against Everton and it’s over to the Man Utd triple up to rescue the Gameweek from here.

The initial plan was to use the Free Hit chip in Gameweek 38+ but it’s suddenly really tempting to use it here instead.

Danny Ings remains a key target and there are favourable matchups for both Man City and Chelsea; at home to Bournemouth and Norwich respectively.

Riyad Mahrez has started 3 consecutive matches and may be at risk of a rest ahead of the FA Cup tie with Arsenal next Saturday.

There isn’t much time to decide any updates will be posted on Twitter as usual but here’s how the team could look for Tuesday’s Gameweek 36+ deadline if the Free Hit chip is used:

David De Gea could come in between the sticks, though Ederson and Nick Pope are alternatives.

The thinking here is that, whilst Man Utd’s defence and attack are both in-form, there’s arguably more competition for places in the midfield and forward spots this week.

For the same reason, Aaron Wan-Bissaka could complete a double-up on Utd defence for the trip to Crystal Palace.

Since the restart, no side have conceded fewer goals (3) and only Wolves have faced fewer big chances (5 to 3).

Norwich have scored just a single goal in their last 6 matches, making the double up on Chelsea defence tempting with Cesar Azpilicueta and potentially Marcos Alonso, providing we get some early team news to confirm whether the left-back is starting.

Matt Doherty and Lucas Digne are the alternatives.

Bruno Fernandes would keep his place in the midfield, while the form of Michail Antonio makes it hard to leave him out when West Ham host Watford.

Christian Pulisic gets the nod over Willian but both are valid punts against Norwich.

The American has had more touches in the opposition’s box (37) than any teammate, since the restart. 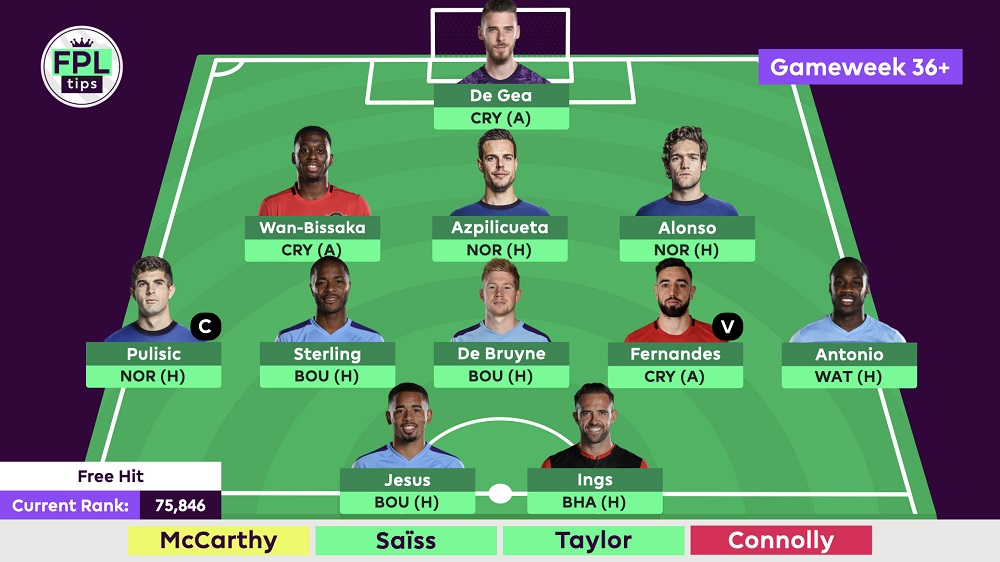 Where it gets tricky is deciding which Man City attackers to include; trying to predict who gets rested and who starts.

David Silva and Phil Foden seem well-placed for starts against Bournemouth, having been rested from the XI midweek, but is it worth including them at the expense of highly-owned Kevin De Bruyne and in-form Raheem Sterling?

Gabriel Jesus has been withdrawn just after the hour mark in each of the last two matches and you’d think either him or Sterling would at least start this Gameweek, if not both.

Danny Ings has 4 goals and 1 assist since the restart, so the final place in this potential Free Hit team goes to him ahead of a meeting with Brighton.

With slight uncertainty over those Man City attackers, it’s Christian Pulisic who will likely take the armband, although a David Silva differential punt is worth considering.

Chelsea’s form has been hit and miss but they’re up against a relegated Norwich side that have conceded a league-high 15 goals since the restart.

Let me know your thoughts on the team, whether you think it’s the right move to play the Free Hit this Gameweek or not and be sure to follow on Twitter for any late updates.