A couple of late tweaks saw Nick Pope and Matt Doherty come into the Free Hit team; no huge returns from either of them in the 1-1 draw but the Wolves wing-back did at least earn an assist.

The decision to keep hold of Mo Salah in the end unfortunately didn’t pay off but the opportunities were there for him, once again.

Selling De Bruyne and Mahrez on the Free Hit worked out to some degree, after both were given a rest against Bournemouth but Sterling and Foden failed to capitalise with their extra game time.

As it stands, a 6-point return from captain Pulisic isn’t to be sniffed at this Gameweek and it could have been a lot more, with the American taking 3 shots in the box in total and missing a big chance.

Gabriel Jesus slightly made up for the double Man City midfielders and was unfortunate not to be awarded a penalty.

With the Free Hit now used and no major surgery required in the team, the plan is to save a free transfer in order to be able to make a couple of changes for the final Gameweek of the season.

Gabriel Jesus and Pierre-Emerick Aubameyang will be the key targets in Gameweek 38+.

Rui Patrício returns to the team after conceding another last-minute goal, this time to a Chris Wood penalty.

But only Man City (3) and Spurs (2) have conceded fewer big chances than Wolves (4) over the last 4 matches.

They face a Crystal Palace side with 2 goals to their name during that period; only Norwich (1) have managed fewer.

The trio of Alexander-Arnold, Saïss and Digne will lineup in defence, with Charlie Taylor likely to miss out due to a hamstring injury.

Liverpool haven’t been at their best defensively since the restart but their opponents Chelsea have an FA Cup semi-final just 3 days prior.

Kevin De Bruyne and Riyad Mahrez return to the midfield after their rests against the Cherries but may still have their game time managed at Watford, due to their FA Cup involvement.

Salah currently remains 4 goals behind Jamie Vardy in the Golden Boot race but the Leicester forward will have a chance to increase his lead against Sheffield Utd.

It’s a home fixture against West Ham for Bruno Fernandes and Martial, though the Hammers have tightened up defensively in their last 4 matches, where they’ve allowed just 5 goals and 4 big chances.

With a goal in each of the last 2 Gameweeks, Raúl Jiménez will get one final outing in the team before moving him on to either Jesus or Aubameyang.

He’s up against a Crystal Palace side that have shipped 13 goals in their last 4 matches; no side have conceded more. 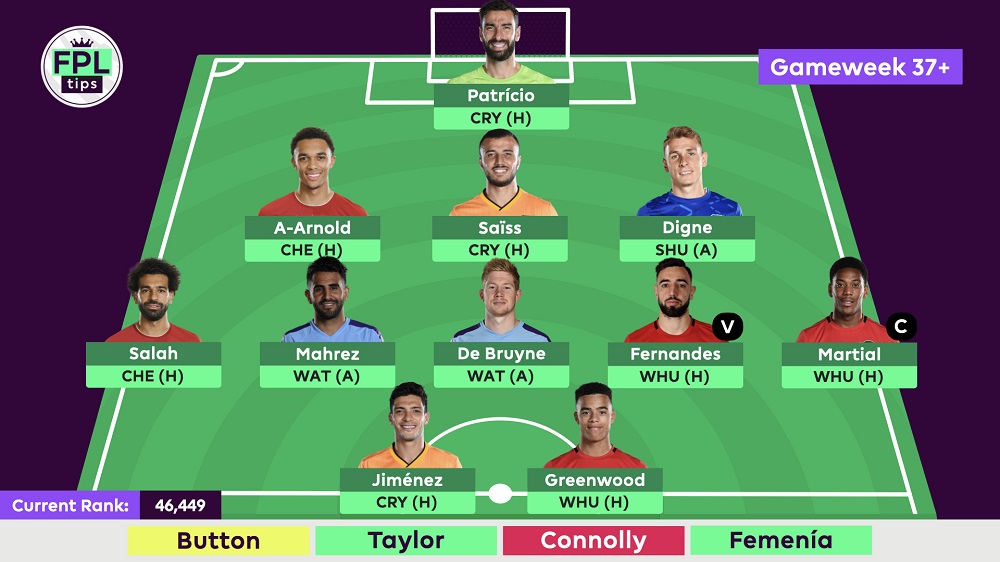 There are doubts over Mason Greenwood’s availability for the Crystal Palace game due to a swollen ankle but hopefully it’s not serious enough to keep him out of the meeting with West Ham.

The 18-year-old has been a key figure for United in the last 4 matches, where he’s picked up 4 goals and 1 assist.

Despite the improvement in West Ham’s defensive numbers, it’s hard to overlook a Man Utd captain due to possible rotation for the Man City assets.

Bruno Fernandes is the ever-reliable, highly owned, safe pick but at this late stage in the season, it’s tempting to gamble on the potentially more explosive, out-of-position Anthony Martial.

The Frenchman has picked up 48 points in 3 home matches since the restart, compared to 23 points for Fernandes.

During those matches, no teammate has fired more shots in total (11), on target (6) or from inside the box (7), while only Rashford can match his 4 big chances.

BEFORE YOU GO… Fanteam’s new season-long game is likely to be open weeks before FPL for the new 2020/21 Fantasy Premier League season, so be sure to click the banner below and make sure you’re registered and ready to go next week…