For the very last time this season, FPLTips have locked their FPL team in for Gameweek 38+

Wolves kept out Crystal Palace in a 2-0 win but frustratingly, Saïss was rested to the bench, leaving only Kiko Femenía as cover.

Alexander-Arnold reminded us why he’s such an explosive asset, earning a goal and assist against Chelsea.

There were plenty of goals in that game, including 5 for the home side but Mo Salah wasn’t really at the races once again and failed to score with his 3 shots in the box.

Bruno Fernandes looked tired as United dropped points against West Ham, while Riyad Mahrez was on the bench for a 2nd successive Premier League game.

The forwards both came away with returns; Jiménez with a slightly fortunate assist and Greenwood with a well-taken finish to equalise against West Ham.

A score of 63 points wasn’t enough for a green arrow unfortunately and a top 50K finish is looking unlikely, with no Free Hit left to play in Gameweek 38+.

It wasn’t ideal but with the exact cash available, 2 early transfers have already been made and any surprises with the team news could require a hit.

Raheem Sterling has made a late surge for the Golden Boot, with 6 in his last 4 outings and he’s spoken about his goal of achieving at least 20 goals for the season; the home fixture against Norwich should give him that opportunity.

Bruno Fernandes is unfortunate to make way but he was the only midfielder with a high enough value to make the switch other than Salah, who reluctantly stays despite having missed a number of big chances of late.

Patrício makes way to help fund the move, in a downgrade to Arsenal’s Martínez, ahead of Watford’s visit to the Emirates.

So, for the last time this season, here’s how the team is set to lineup for Gameweek 38+:

Watford are in need of points having moved into the relegation zone, following Villa’s win against the Gunners.

But the Hornets have only scored once in their last 4 away trips; only Crystal Palace (0) have fared worse.

It’s looking unlikely that Charlie Taylor will recover to reclaim his place in the Burnley backline but he’s yet to be officially ruled out; Saïss is on standby to come in as Wolves travel to Stamford Bridge.

Alexander-Arnold and Digne have favourable matchups against Newcastle and Bournemouth, respectively.

Over the last 4 Gameweeks, the Liverpool right-back has attempted more assists (7) and created more big chances (2) than any other defender.

With 5 days rest since their win over Watford, you’d expect Man City to go fairly strong for their final Premier League fixture of the season.

With 2 goals and 3 assists in 4 home matches since the restart, De Bruyne has averaged 9.0 points per game.

Mahrez meanwhile has scored all 3 of his goals since the restart at the Etihad.

Salah has failed to score in the last 3 Gameweeks but ranks 1st amongst midfielders with tallies of 11 shots in the box, 7 efforts on target and 4 big chances.

He’s up against a Newcastle side that have been hit hard by defensive injuries; no side have conceded more goals (10) over the last 4 Gameweeks.

Anthony Martial has found a return in each of the last 5 Gameweeks, where he’s averaged 9.2 points per game.

Up front, there’s no Kane or Aubameyang, just the good, old-fashioned Raúl Jiménez, who often steps up against the ‘big six’.

He’s picked up 8 goal involvements in 11 appearances against those sides this season (5 goals, 3 assists), with only De Bruyne (11 – 6 goals, 5 assists) faring better.

With 5 goals and 1 assist in the last 6 Gameweeks, Greenwood has picked up 45 FPL points; more than any other forward. 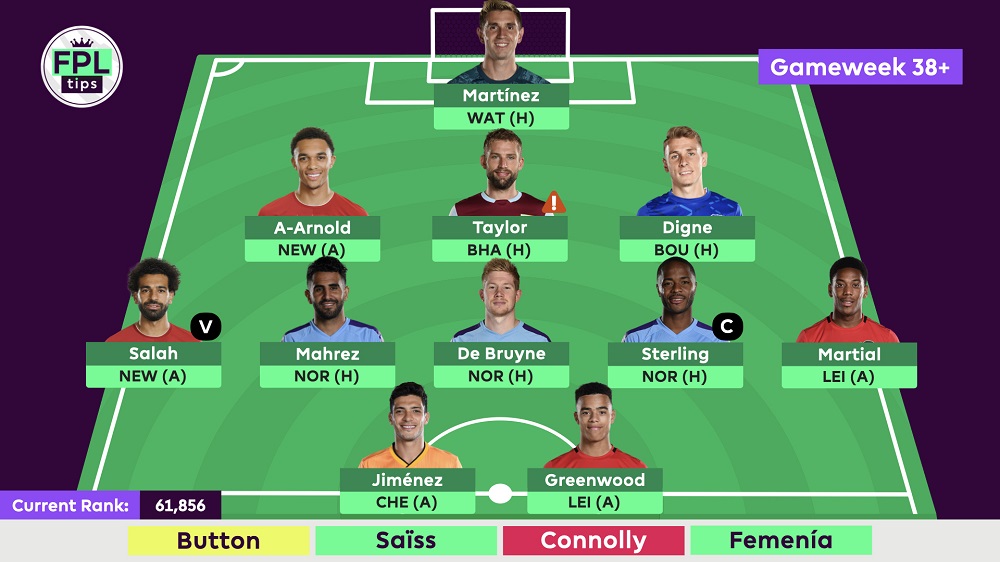 Spurs found plenty of joy on the counter against Leicester and that could be the case again here for United.

The Foxes have shipped 10 goals in the last 4 Gameweeks; only Crystal Palace (11) and Chelsea (13) have fared worse.

Had Salah been in better form coming into the game with Newcastle, he would have been a tempting captaincy option.

But having risked early moves just to bring him into the side, Raheem Sterling is now the main contender.

No player has scored more points in the last 4 Gameweeks, where he’s picked up 6 goals and 2 assists, to average 12.3 points per game.

BEFORE YOU GO… Fanteam’s new season-long game is likely to be open next for the new 2020/21 Fantasy Premier League season, so be sure to click the banner below and make sure you’re registered, for free,  and ready to go next week…