Southampton extended their unbeaten run with a 1-1 draw at Wolves, largely down to the heroics of McCarthy, who pulled off 8 saves to claim maximum bonus points.

The move to bring in Targett got off to a bad start after Aston Villa were beaten 2-1 by Brighton but Arsenal’s poor form in front of goal continued, to see Ayling earn a clean sheet.

Leeds allowed just 2 shots on target during the Gameweek, with only Chelsea (1) restricting the opposition to fewer.

Captain Bruno Fernandes converted a penalty at the second time of asking after his first effort had been saved by an eager Sam Johnstone, who came off his line too early.

The Portuguese star provided a total of 6 attempted assists against the Baggies, which was more than any other player during the Gameweek.

Heung-Min Son remained calm and clinical to score with Tottenham’s only shot in the first-half against Man City in what was a classic Jose Mourinho performance.

The South Korean managed just a single touch in the opposition’s box all game.

Spurs added a second goal through Giovani Lo Celso, as Kane picked up yet another assist; his 9th of the season.

No teammate completed more passes in the final third (10) than the England captain.

Calvert-Lewin benefited from a porous Fulham defence that allowed the Toffees 3 big chances.

The Everton forward landed 3 shots on target, with only Sadio Mané (4) managing more during the Gameweek.

Although he failed to find the back of the net against Arsenal, Bamford showed plenty of encouraging signs.

The 27-year-old was afforded 2 big chances and 5 shots in the box, striking the post with one of his efforts.

So, let’s move on to the transfer plans ahead of Gameweek 10:

With money tight for future plans, another early transfer has been confirmed that sees Jamie Vardy make his way into the team ahead of ties with Fulham, Sheffield Utd and Brighton.

The 33-year-old has had 7 big chances in the last 4 Gameweeks; only Bamford (8) has been afforded more.

Unfortunately, that has meant saying goodbye to Harry Kane for the time being.

Spurs attackers could still tick over despite the fixtures but I just feel that Vardy and the City premiums have a higher ceiling and provide better captaincy options over this upcoming run.

With that being said, Heung-Min Son is a potential transfer out, though it would be for a hit. 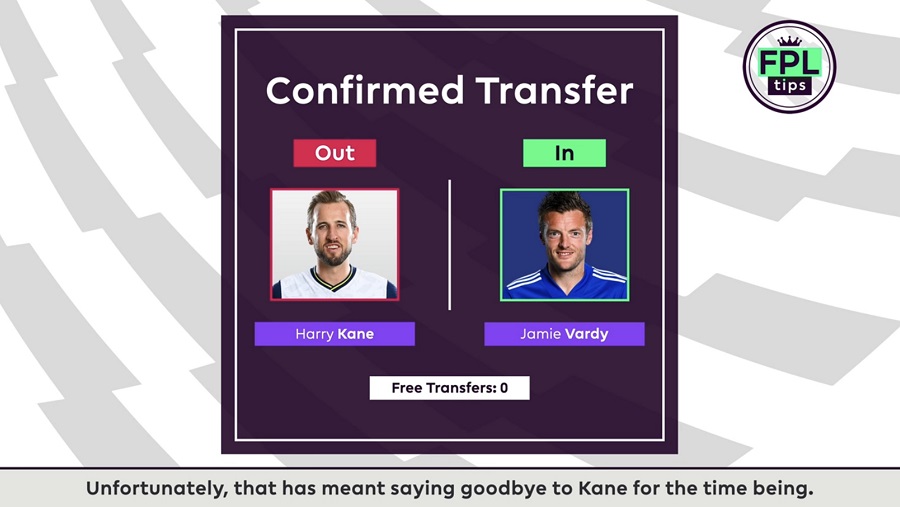 Kevin De Bruyne’s recent rise in price means there’s not quite enough money in the bank to bring in the Belgian in a straight swap, so it would have to be the more differential Raheem Sterling who came in.

As poor as City have been, there’s no doubt in my mind that they’ll start to climb up the table over this period; the fixtures are just too good for them not to.

Having said that, it would be nice to actually see them come through the Burnley game and pass that first test before jumping on board.

Especially when we’re talking about replacing the in-form Son.

So, the current plan is to wait on that second move for now and look to bring in one of the City premiums ahead of the Fulham fixture next Gameweek, either for Son or maybe even for Bruno Fernandes – depending on what happens in Gameweek 10.

Here’s how the team is set to line-up for Gameweek 10:

McCarthy has been a real saving grace over the last 4 Gameweeks, where he’s averaged 5.5 points per game.

No goalkeeper has made more than his 19 saves over that period, which bodes well for the meeting with Man Utd on Sunday.

With Fulham travelling to the King Power stadium, Justin comes back into the XI to replace Walker-Peters.

The 22-year-old may be at risk of losing his starting place in the coming Gameweeks but should still be good in the short-term as Pereira and Castagne work their way back. 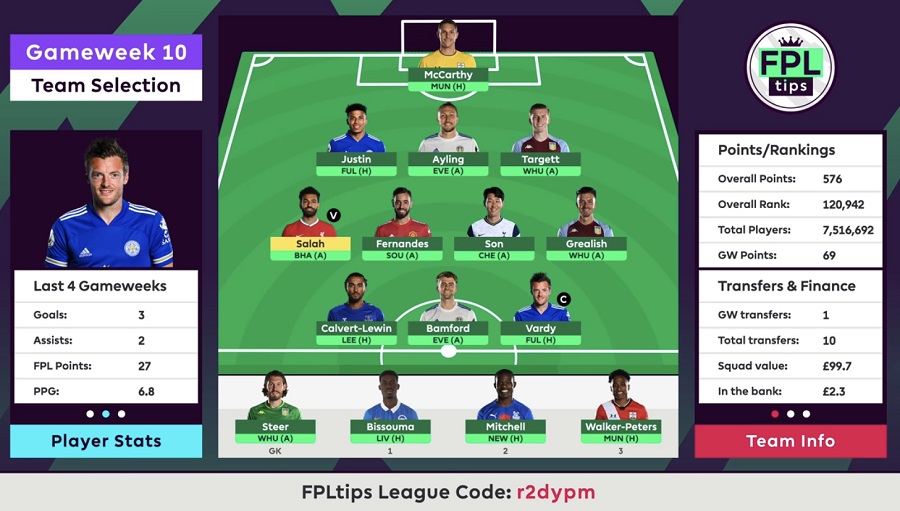 There’s even a small chance he could fill in at centre-back until Soyuncu returns, if the Foxes stick with a back three.

Targett faces a West Ham side that, despite climbing up to 8th place in the table, have only managed a single goal in each of the last 4 Gameweeks.

They’ve fashioned 4 big chances in the time, with only Southampton (3) and West Brom (2) faring worse.

It could be worth fielding Tyrick Mitchell ahead of Ayling on the off-chance Roy Hodgson decides to tinker with his defence, following the defeat to Burnley.

Leeds have been very hit and miss at the back, so it’s difficult to predict how they’ll fare against Everton.

The Toffees rank 15th with their total of 5 big chances in the last 4 Gameweeks, with 3 of those coming against Fulham last weekend.

There’s good news in midfield as Salah looks set for a return in the Champions League midweek.

Brighton have conceded 8 goals in their 3 matches against ‘big six’ teams this season; an average of 2.7 per game.

The remaining three spots in midfield are now very template, with Son, Grealish and Fernandes sitting in 71%, 65% and 52% of the top 100,000 squads, respectively.

Grealish and Fernandes (each 6) rank joint-top amongst FPL midfielders for shots on target in the last 4 Gameweeks, while only Jota and Salah (each 4) have had more big chances than Son (3).

With 3 goals and 1 assist in the last 4 Gameweeks, Calvert-Lewin has averaged 6.8 points per game.

He’s taken 5 shots on target over that period, with only Vardy (8) and Bamford (9) landing more, amongst forwards.

The Leeds striker tops just about every metric for goal threat over this period, taking league-leading figures of 18 shots in the box, 9 efforts on target and 8 big chances.

It will be tempting to give Mo Salah the armband if he looks sharp midweek, with the Egyptian now below 28% ownership.

But Jamie Vardy just about edges him this Gameweek, with that home fixture against Fulham.

No side have shipped more than their 18 goals this season, with only West Brom equalling that tally.

BEFORE YOU GO… Our official Daily Fantasy Sports Partner, FanTeam, are offering all NEW customers FREE ENTRY to this weekend’s Gameweek 10 Fantasy Premier League contest, which has a €10,000 guaranteed prize pool.

Simply register for your free account here, or by clicking the banner below and once you’ve signed up, you’ll automatically receive a FREE ENTRY to this weekend’s Gameweek 10 Weekly Monster, which has a guaranteed prize pool of €10,000 – with €1,000 going to the first place winner! 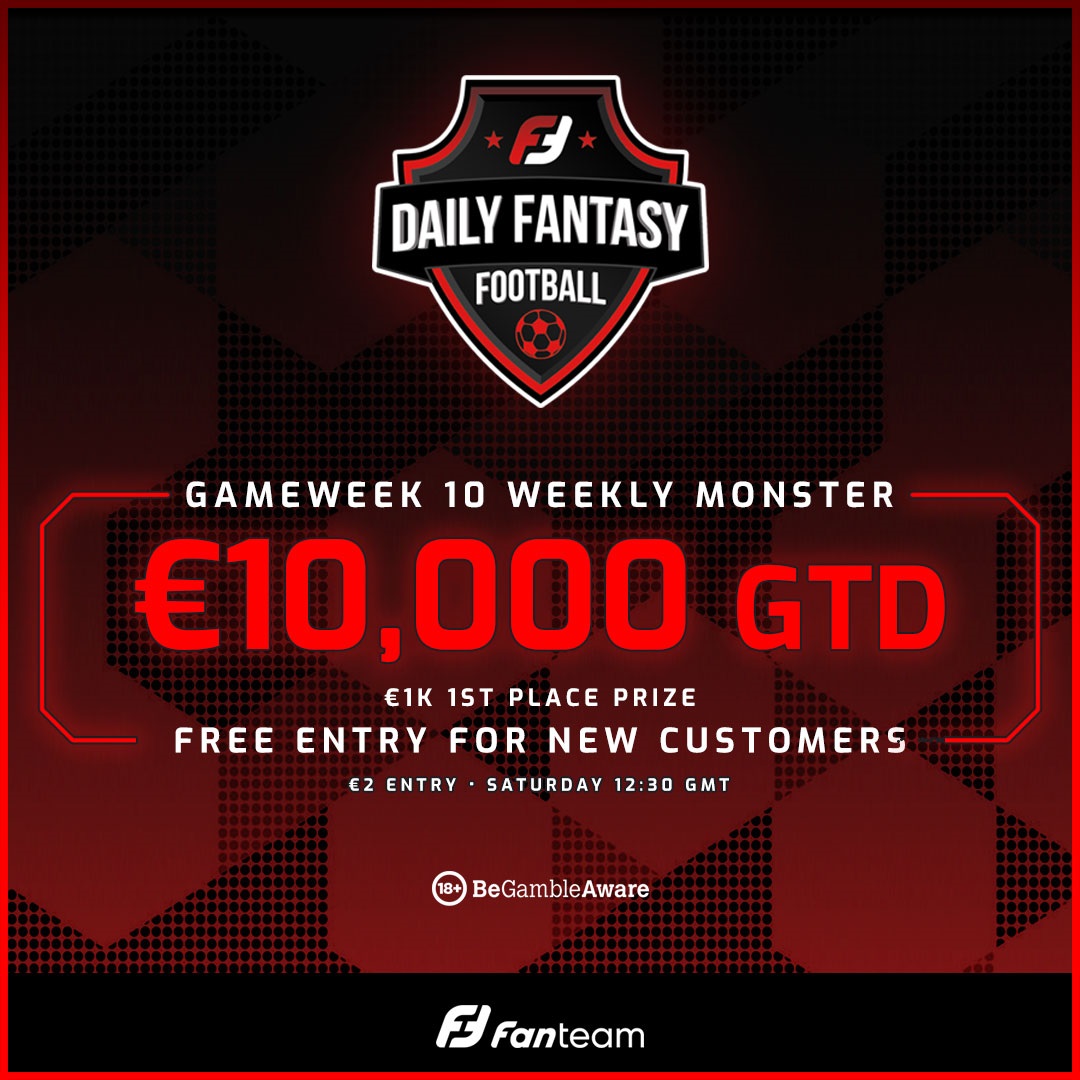