After holding off from using the wildcard last Gameweek, there’s no uncertainty this week; it’s already been activated ahead of Gameweek 7 and here’s how the team is shaping up.

It’s also worth noting that, this lineup may change before Saturday’s 11:30am deadline, for many different reasons, so be sure to stay tuned on Twitter for any important updates.

As always ladies and gents, we have provided you with a video version of this article, which you can find above.

Rui Patricio has averaged close to 4 saves per game over the last 4 Gameweeks (3.75), keeping 2 clean sheets and conceding just 2 goals, despite facing Man Utd and Man City over that period.

With 4 favourable fixtures coming up for Wolves, where they’ll take on Southampton, Crystal Palace, Watford and Brighton, the Portugal international looks primed for plenty of points in the short-term.

With the number of saves he makes, Patricio is a ‘set and forget option’ between the sticks but if there’s a free transfer spare around Gameweek 11, it might be an option to bring in either Lucasz Fabianski or Mat Ryan, with West Ham and Brighton set for a long run of good fixtures.

Marcos Alonso and Andrew Robertson keep their places in defence, ahead of their Gameweek 7 matchup against each other, which is a tough one to call.

But no team have conceded fewer goals or kept more clean sheets than Liverpool so far and with 11 attempted assists this season, only Holebas has created more chances than Robertson amongst defenders.

The Reds have a great run of fixtures again from Gameweek 9 onwards, starting with Huddersfield and Cardiff back-to-back.

Ryan Bennett will make the starting XI, for the double up with Rui Patricio, as Wolves host a Southampton side that have only managed 6 goals this season; just 5 teams have scored fewer.

The midfield will be similar to the one proposed in last week’s wildcard draft, with Eden Hazard set to come into the team, despite some tough fixtures ahead.

There are some question marks over the Belgian after the goalless draw with West Ham but his 6 efforts on target over the last 4 Gameweeks, is level with Sterling and Salah; only Schürrle has taken more amongst midfielders.

James Maddison has been on the radar for a few weeks and after his free kick goal against Huddersfield, he’s fired a respectable tally of 5 efforts on target in the last 4 Gameweeks. 9 attempted assists in that time is just one fewer than Mo Salah and David Silva have produced.

Burnley’s Gudmundsson is more of a differential pick, with the next 2 Gameweeks in mind. Cardiff and Huddersfield have the worst defensive records in the Premier League this season at present, each conceding a league-high tally of 14 goals.

Ryan Fraser is perhaps a safer alternative for this spot, but Bournemouth suffered that 4-0 defeat to Burnley last time around and face in-form Crystal Palace and Watford defences up next.

This spot will essentially be a 2-week placeholder for Mo Salah, at least that will be the plan. Wilfried Zaha has become a more expensive, premium forward, maybe you can guess who that is?

But completing the midfield will be Everton’s Richarlison, who looked lively during his return from suspension against Arsenal, despite failing to get on the score sheet. Amongst midfielders, only Mahrez and Knockaert took more shots on target in Gameweek 6.

Harry Kane is the man who will come in with the funds freed up by temporarily going without Mo Salah.

As mentioned briefly before, the intention is to own the Kane and Gudmundsson pairing for the next 2 Gameweeks, where they’ll each face fixtures against Cardiff and Huddersfield, before hopefully using 2 free transfers to swap them out for Mo Salah and a cheaper forward, such as Marko Arnautovic or Glenn Murray.

Salah can and probably will still get points over these next couple of matches, but he’s up against Chelsea and Man City, so his points ceiling should be a lot lower than Kane’s, at least in theory.

Yes, Kane hasn’t looked his best in the opening weeks of the season, managing just 4 shots on target over the first 5 matches. But he equalled that tally in a single game against Brighton last weekend, taking more efforts on target than any other player in Gameweek 6 (4). 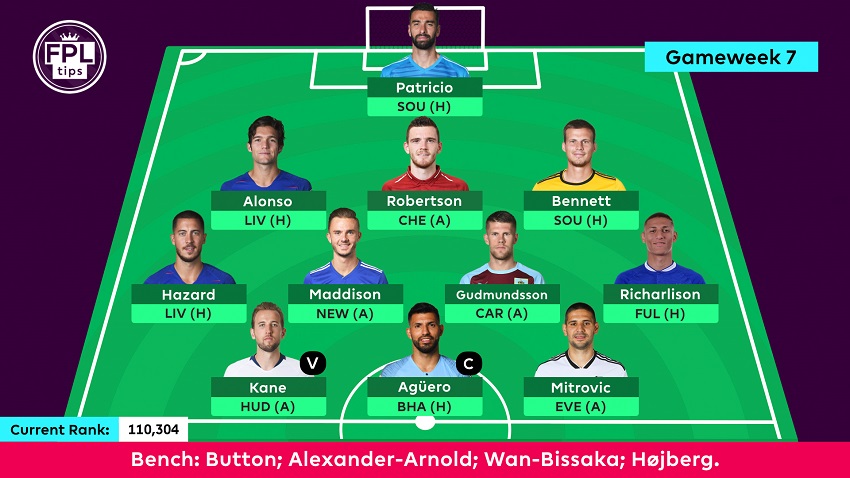 So, his underlying numbers are starting to move more in the direction of what we’re used to from him and it’s really that Gameweek 8 fixture, at home to Cardiff, where he looks very tempting to own and most likely give the captaincy to.

Sergio Agüero has to keep his place alongside the Spurs man, having taken 19 goal attempts in the last 4 matches, with a home fixture against Brighton up next for Man City.

Aleksandar Mitrovic will complete the team, after he yet again got his name on the score sheet last weekend. It’s now 5 goals in the opening 6 matches for the Fulham striker and no player has taken more than his 8 shots on target over the last 4 Gameweeks.

There’s the slight temptation to give Kane the armband this Gameweek; he scored a brace away to Huddersfield last season and their defensive record at the moment suggests he’ll get plenty of opportunities.

But Sergio Agüero is at home to Brighton, an equally tempting fixture and he’ll definitely be the safer captain option, due to his status as the most-owned player in the game.

To get involved, simply download and check out their FREE iOS and Android app.

Thank you for reading ‘Fantasy Premier League Tips – @_FPLTips‘ FPL TEAM SELECTION: Gameweek 7’ which was written and produced by @_FPLtips