Liverpool’s Mo Salah to wear the captains armband for FPLTips in Gameweek 7.

Gameweek 6 saw a fairly low average of just 48 points. It was a rough week for many, so it’s great to come away with a green arrow and a steady score of 59 points.

The transfer plan discussed in last week’s video was to bring in James Rodriguez for Podence but prior to the deadline, Carlo Ancelotti suggested there were doubts over the Everton midfielder’s fitness.

Harry Kane was the other main target and the uncertainty over Rodriguez presented an opportunity to instead use the money in the bank to bring in the Spurs forward, without losing either Danny Ings or Raul Jimenez.

That decision paid off with all three forwards delivering points, while Everton’s unbeaten run came to an end at Southampton.

Alex McCarthy picked up his 3rd clean sheet in 4 Gameweeks and suddenly looks back in favour as an FPL asset.

But there were also plenty of near misses and moments of misfortune this Gameweek; none more infuriating than Tyrick Mitchell losing his clean sheet in the closing seconds against Fulham to a long-range effort.

That was made all the more frustrating by having opted to field the Crystal Palace defender ahead of Walker-Peters and Justin, who each kept clean sheets.

Alexander-Arnold was on the wrong side of a couple of VAR decisions which saw him return 2 points rather than double-figures.

Sheffield United were controversially awarded an early penalty, before the right-back later set up captain Mo Salah for a disallowed goal which was marginally offside.

It’s Gameweeks like this that you have to remind yourself to focus on the decision rather than the outcome and giving the Egyptian the armband was definitely a sensible decision, despite not paying off.

So, let’s move on to the transfer plans ahead of Gameweek 7:

Daniel Podence has narrowly escaped being sold in the last two Gameweeks and is likely to get one final outing in Gameweek 7.

The plan is to bank the free transfer and make a double swap the following Gameweek, freeing up funds elsewhere to upgrade Podence – either to on-going target James Rodriguez or potentially Wilfried Zaha, who featured in this week’s Watchlist update.

The Wolves midfielder actually does pass the eye-test; he’s great on the ball and works himself into some good positions but in the last two Gameweeks, his 3 efforts on target have each been saved.

The longer he goes without taking his chances, the more at risk he feels from losing his starting place to Adama Traore. 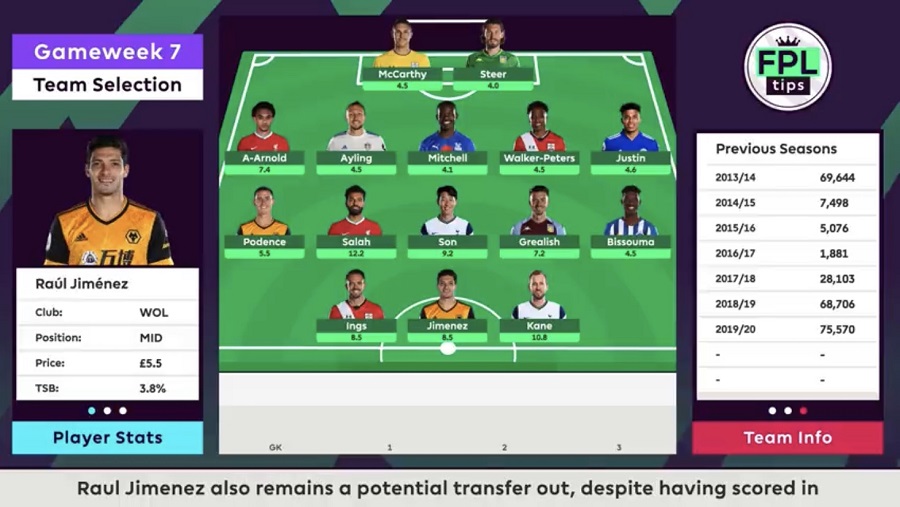 Raul Jimenez also remains a potential transfer out, despite having scored in the last two Gameweeks, due to the lack of service provided to him by teammates.

The Mexican’s goals have really come from solo efforts, where he’s picked up the ball, worked himself some space and shot from range.

So, again, he’ll keep his place for Crystal Palace but then it could be an option to move him down to Michail Antonio (if fit) or perhaps Patrick Bamford.

Selling Alexander-Arnold would be an alternative option to free up cash, should the right-back fail to deliver points against West Ham, though he has started to look sharper.

There’s another week to assess the options but ultimately, a downgrade somewhere will be needed to upgrade Podence.

With that being said, here’s how the team is set to line-up for Gameweek 7:

Southampton were very organised and defensively sound in their 2-0 win over Everton last Gameweek, making McCarthy and Walker-Peters much more appealing ahead of the trip to Aston Villa.

They’ve conceded just 3 goals in the last 4 Gameweeks and no side have allowed fewer than their 2 big chances.

No side have conceded fewer goals than Leeds in that time – with 2, so Luke Ayling is likely to remain in the XI to face Leicester.

That means there’s just one remaining spot for Mitchell, Justin or Walker-Peters – all three have fairly favourable fixtures against Wolves, Leeds and Aston Villa, respectively.

The Foxes were impressive in keeping their 2nd clean sheet of the season against Arsenal last Gameweek, restricting the Gunners to 0 big chances, so James Justin may be the man to get the nod.

It’s shaping up to be a three-way contest between Salah, Son and Kane once again for the captain’s armband, with Liverpool and Spurs hosting West Ham and Brighton, respectively.

Kane and Son last Gameweek showed they’re capable of finding a way, even against a side like Burnley, that sit deep and make it difficult to play attractive, flowing football.

Across their respective three home matches so far this season, it’s Mo Salah who has amassed the most FPL points (27). 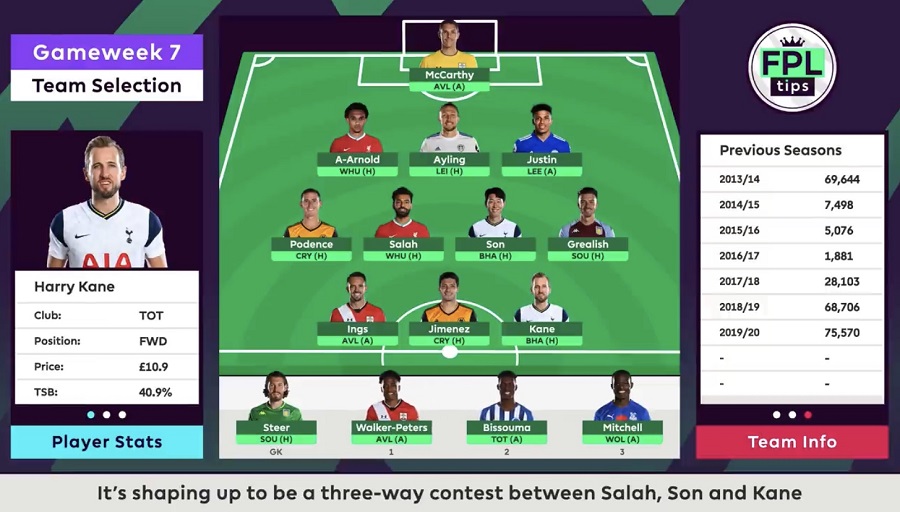 Midweek matches could play a big part in the decision too; Liverpool host West Ham on Saturday for what will be their third successive home match.

Spurs, on the other hand, have had to travel to Burnley and then face Antwerp away on Thursday, before returning home to host Brighton on Sunday.

The Captaincy Picks and tips article and video will be out later in the week to look at some more detailed numbers and further this discussion but for now, it’s Mo Salah who retains the armband.

Thank you for reading Fantasy Premier League Tips – ‘FPLTips Team Selection – Gameweek 7?’ which was written and published by FPLTips and FFPundits