Fantasy Premier League expert tips, picks, opinions and rate my team outcomes from some of the top 1K FPL managers of all time

When selecting a Gameweek 1 squad, it can be useful to keep an eye on player ownership levels and the template teams that emerge.

From there, you can decide whether to play safe or to instead find alternative differential picks that you think can outscore the more popular options.

With that in mind, this video is in collaboration with Fantasy Football Fix, who have created a template team based on the top 1000 ‘expert’ managers of all time.

These FPL expert picks are obtained using aggregated public ‘Rate My Team’ data from various sources and are updated every hour on the fix website.

So, let’s take a look at some of the players who make the cut:

Whilst Brighton’s Mat Ryan is the most selected goalkeeper overall (21%), the ‘experts’ here have instead opted for Alex McCarthy.

The ‘Fixture Analyser’ tool on fantasyfootballfix.com backs up this choice.

Over the first 4 Gameweeks, when filtered by ‘defence difficulty’, only Everton have a more favourable run-in than Southampton, who face Crystal Palace, Burnley and West Brom in that time.

It’s no surprise to see Trent Alexander-Arnold make the team; the right-back is the most selected player in the game (54%) after finishing with 210 FPL points last season.

Alongside him, the Top 1000 ‘experts’ have gone with James Justin, who is set to deputise for the injured Ricardo Pereira.

Using the ‘Rotation Planner’ tool, we can see that a Leicester defender would work well alongside players from Wolves and Leeds, for the first 4 Gameweeks.

This 3-man rotation allows you to bench each of them when they come up against Liverpool or Man City.

Crystal Palace defender Tyrick Mitchell has been selected for a place on the bench after starting three consecutive matches in pre-season, while Patrick van Aanholt works his way back from injury.

With opening fixtures against Fulham and West Ham, Pierre-Emerick Aubameyang is currently the most selected midfielder in the game (44%) and the ‘expert’ managers are in agreement with that trend.

As the heatmaps show, although he often starts out on the left, he’s a player who gets plenty of touches and shots away in the box.

No Arsenal teammate had more than his 152 touches in the opposition’s box last season, while only Sterling (83) and Salah (110) could better his 69 shots in the box amongst FPL midfielders. 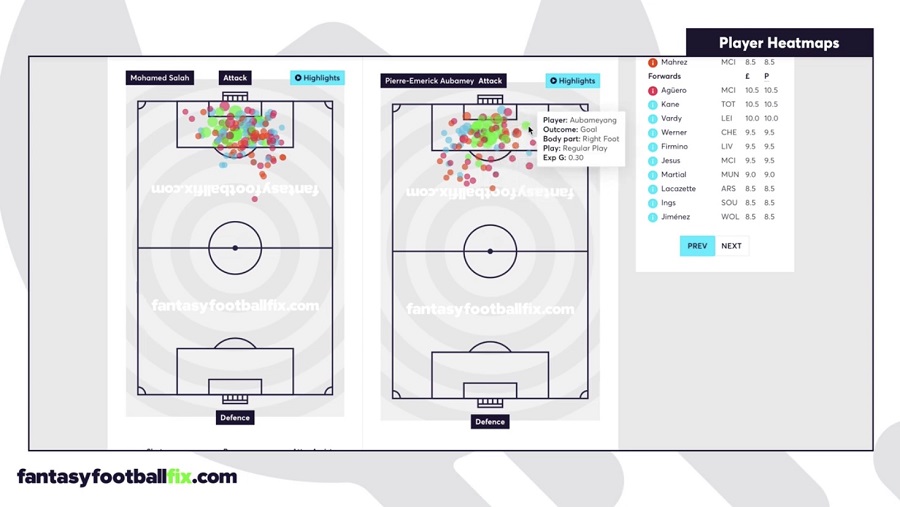 Speaking of the Egyptian, Mohamed Salah also earns a place in the squad, with newly promoted Leeds travelling to Anfield on the opening day.

The fantasyfootballfix algorithm heavily favours the champions; no team are projected to score more goals than Liverpool (3.5) in Gameweek 1.

The top 1000 ‘expert’ managers have also gone with Heung-Min Son in midfield, who is proving to be a popular pick overall (29%).

The ‘Fixture Analyser’ tool highlights a generous opening run for Spurs, with the algorithm preferring the fixtures of only Fulham, Liverpool and Sheffield United for attacking difficulty over the first 3 Gameweeks.

When it comes to forwards, the ‘experts’ are once again in agreement with the overall trends, selecting Timo Werner and Aleksandar Mitrović – the two highest owned options within this position.

Only Robert Lewandowski (34) had a better return in the Bundesliga last season than Werner, who scored 28 goals in 34 appearances.

Mitrovic, meanwhile, was key to Fulham gaining promotion from the Championship, scoring a league-high 26 goals.

Chelsea’s new-look attack is projected to score 4.9 goals over the first 3 Gameweeks, where only Arsenal, Spurs and Liverpool are more favoured by the algorithm. 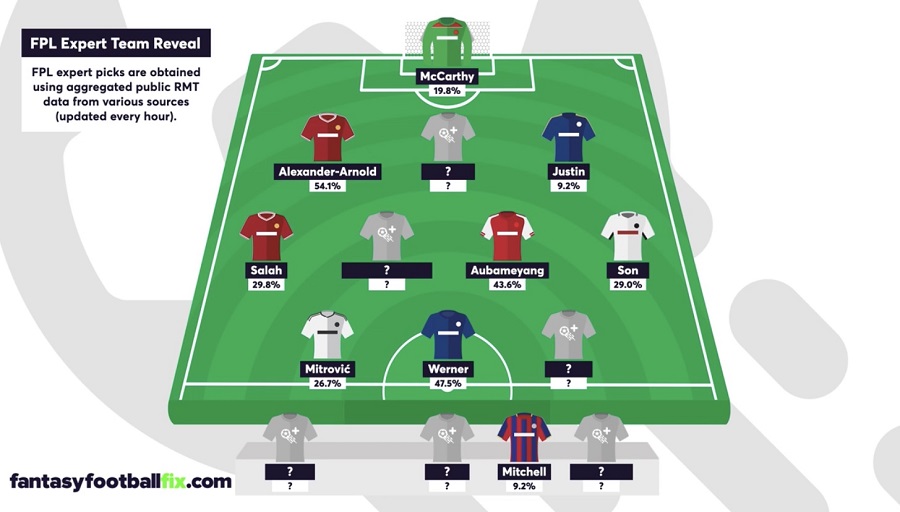 Fulham are rated highly in terms of attacking fixture difficulty, ranking top across the opening 3 Gameweeks, where they face Arsenal, Leeds and Aston Villa.

Use Artificial Intelligence to improve your FPL performance this season and get the unfair advantage.

Head over to fantasyfootballfix.com now and upload your FPL squad to get started (it’s free)!

Thank you for reading ‘Fantasy Premier League Tips: ‘Gameweek 1 Team Reveal of Top 1k Expert FPL Managers of All Time ’ which was written and produced by FFPundits & FPLTips.