A guaranteed prize pool of €250,000 and a first place prize of €25,000 are on offer from Europe’s largest daily fantasy sports site, FanTeam.

[Please note that FanTeam is strictly an 18+ site and remember to always BeGambleAware.org]

Imagine being able to select players like Messi, Ronaldo and Neymar in Fantasy Premier League. They’d be the first names on your team sheet, each and every week – right?

Well, the best players in the World are soon to be on display in the Champions League, and cheering them on when they’re locked in to your FanTeam Champions League fantasy team just takes the excitement to another level.

Our previous article briefly touched on the rules of the game, which you can read here, and many of you are familiar with the scoring from FPL.

However, there are a few subtle differences in the scoring and rules that you need to be aware of.

To play in FanTeam’s €25o,000 UEFA Champions League fantasy contest, you need to create an 11-man team, using a budget of 90M. It’s as simple as that to enter.

Like FanTeam’s season-long game and FPL, the weekly deadline is 90-minutes prior to the first kick-off of the Gameweek fixtures.

However this rule does NOT apply for when this fantasy contest starts in Gameweek 1 – where the deadline is 20:00GMT/21:00CET on Tuesday the 16th of February. For Gameweek 2 onwards, the weekly deadline for all transfers and team changes is 90-minutes before kick-off.

As you’re only required to pick a team off 11 players, there are no subs or benches. However, FanTeam’s ‘Safety Net‘ feature is active – but what is a Safety Net we hear you shout?

Example: if you own Salah (11.0M) and he’s starting the game on the bench, or is not in the squad, he will be replaced at kick-off by the next priced midfielder from Liverpool – which is Mane (10.0M).

Please note, using the example above, if Salah comes on in the 75th minute, you still keep Mane and his points as you started the match with him. The automatic substitution is made at kick-off and you’ll keep that player for the full game, so will score nothing from Salah for this match. 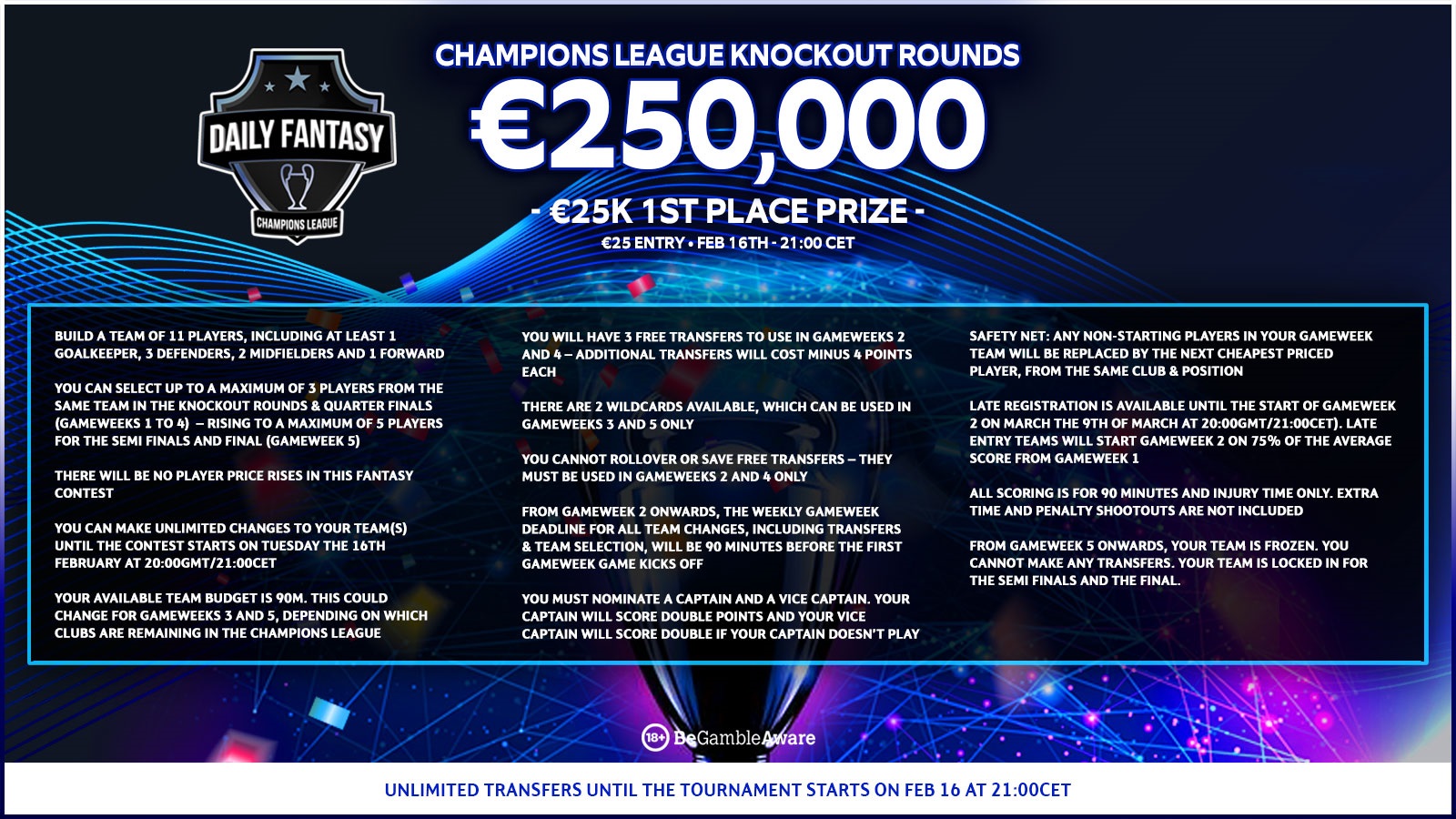 As you can also see form the Game Rules infographic above, there will be no price changes during the entire tournament, but the team budget for all entries could change for Gameweeks 3 (Quarter Finals) and Gameweek 5 (Semi Finals + Final) – but this will depend on which clubs are remaining in the Champions League.

You’ll also see that you have 3 free transfers to use in Gameweeks 2 and 4 – this is to help you manage injuries and react to form accordingly. However, additional transfers will cost you minus-4 points, each time, should you wish to make more changes to your team.

You will each have 2 Wildcards to use during the tournament. The first can be used for Gameweek 3 – and the second Wildcard is for Gameweek 5. Please note: you cannot roll these Wildcards over – they can only be used in weeks 3 and 5.

Whilst we won’t bore you with a breakdown of each of the rules shown in the image above, we will make it clear that Extra Time and Penalty Shootouts are NOT included in our scoring. Players earn points during normal 90-minute regulation and of course, injury time – but no extra time or penalties.

Like with the game rules above, the scoring on FanTeam has slight differences to other season-long fantasy football games you might play on other platforms, but the image below gives a clear guide to our Champions League scoring system.

Here are a few scoring attributes we want to draw you attention to:

Full Match Bonus: If an attacking player lasts the entire game (90 mins and including injury time) they will pick up an additional point. This means players that don’t get substituted are always worth consideration, and that could potentially influence your captaincy decision.

Goalkeeper Save Points: Goalkeepers will earn 0.5 points for every save they make. Therefore, a goalkeeper on a team that allows the opposition a lot of low quality shots (like Pope for Burnley in the Premier League) can really rack up the points when they keep a clean sheet.

This means you should try to prioritise players from teams that are likely to win. No points scored or deducted if the players team is drawing. 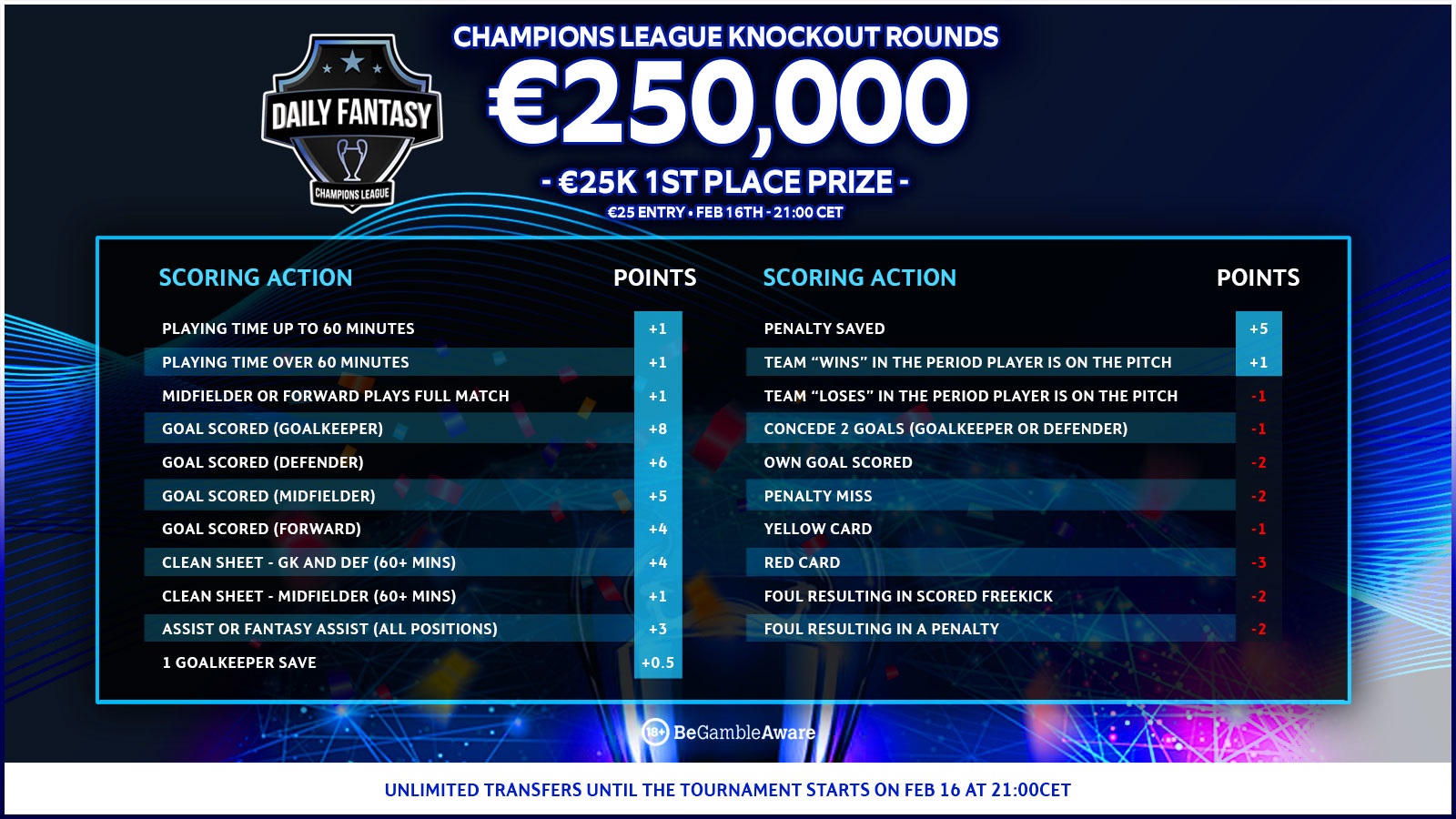 As you can see in the info-graphic above, points are awarded for goals, assists and clean sheets – but can also be deducted for yellow and red cards.

A reminder – there will be no player points scoring for Extra Time or Penalty Shootouts.

Please study the scoring chart above carefully when assessing which players to pick for your team.

Making changes to your team

We strongly urge all entrants to pay close attention to which Gameweeks your Free Transfers and Wildcards are available for.

Please see below a breakdown of the 5 Gameweeks included in this Champions League contest:

You can make unlimited changes to your team until the contest starts at 20:00GMT/21:00CET on the 16th of February.

You get a Wildcard to adjust your squad and remove the players that have been eliminated. The Wildcard gives you unlimited transfers to use until the Quarter Finals deadline, which again is 90-minutes prior to the first kick-off.

You have a Wildcard to adjust your squad and remove the players that have been eliminated. This is your last chance to make wholesale changes, so try to predict which two teams will make it to the Final, as once a team gets knocked out, their players won’t be replaced in your team.

So, basically, you can completely change your team prior to each stage until the Semi Finals and after the first leg, you can make up to 3 free transfers to tweak things.

However, once you’ve used your last Wildcard in Gameweek 5, your team is locked in for the Semi Final and Final, so choose wisely…

Ready to get involved?

The contest kicks off at 20:00GMT on Tuesday the 16th of February, so be sure to register and enter a team to avoid missing out.

[Please note that FanTeam.com is strictly an 18+ site and remember to always BeGambleAware.org] 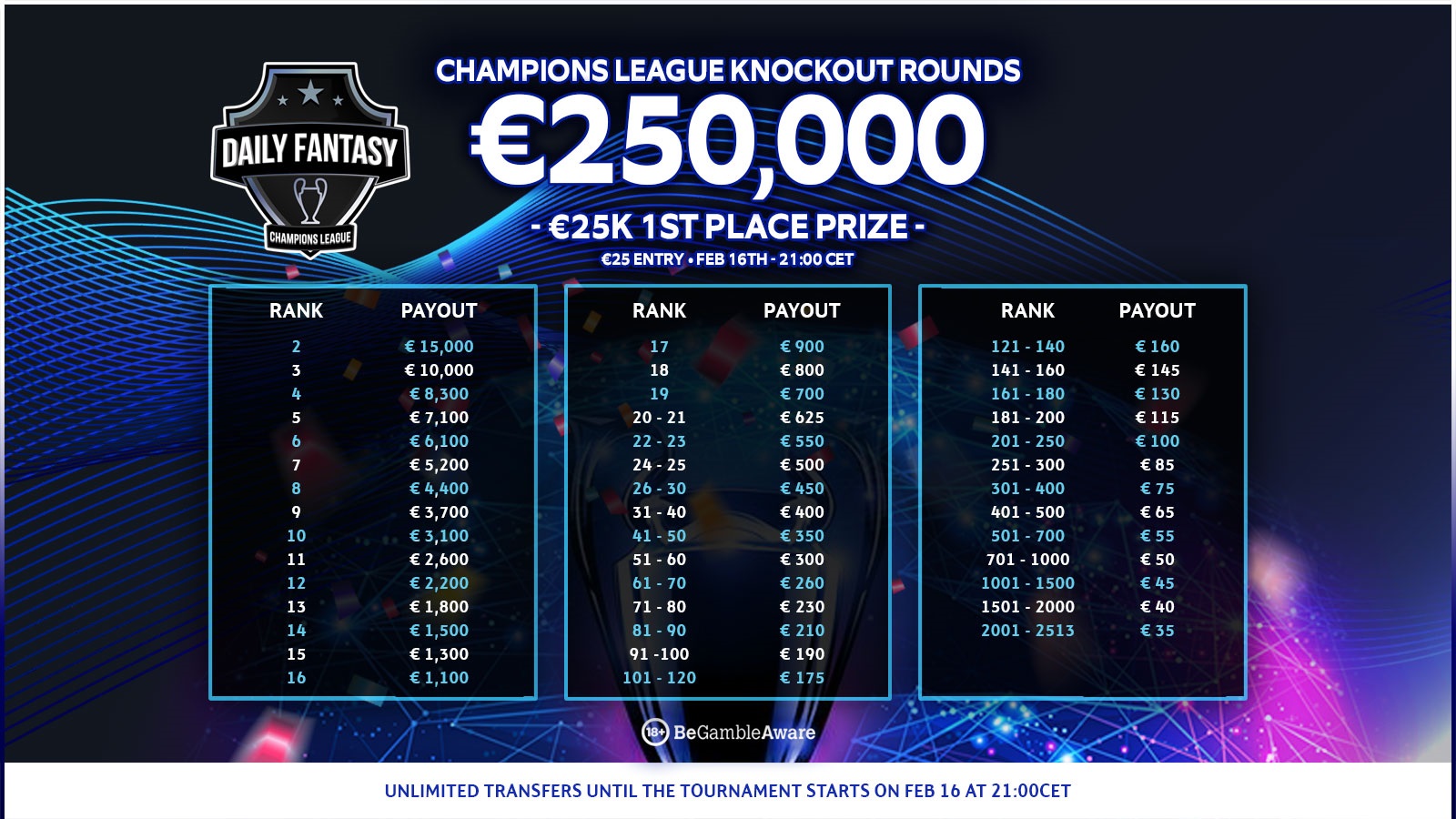