Looking to play the McDonald’s World Cup Fantasy Football game but don’t know where to start? Read on…

Good day to all World Cup Fantasy Football managers and welcome to our brief How To Play Guide for the Official FIFA McDonald’s World Cup game.

There’s a How To Play page on the FIFA website which explains each an every rule in great detail, however, I, @FFCommunity_ have decided to take the main talking points and concerns from around the fantasy football community on Twitter to create one, simple, beginners guide to help you gain a basic understanding.

Once you’re up and running and your first draft attempt has been created, we’d be honoured to have you join our official Fantasy Football Pundits league, which has over 3500+ entries so far.

To enter, simply click the banner below, or, enter JSLRNXPV once you’re registered. 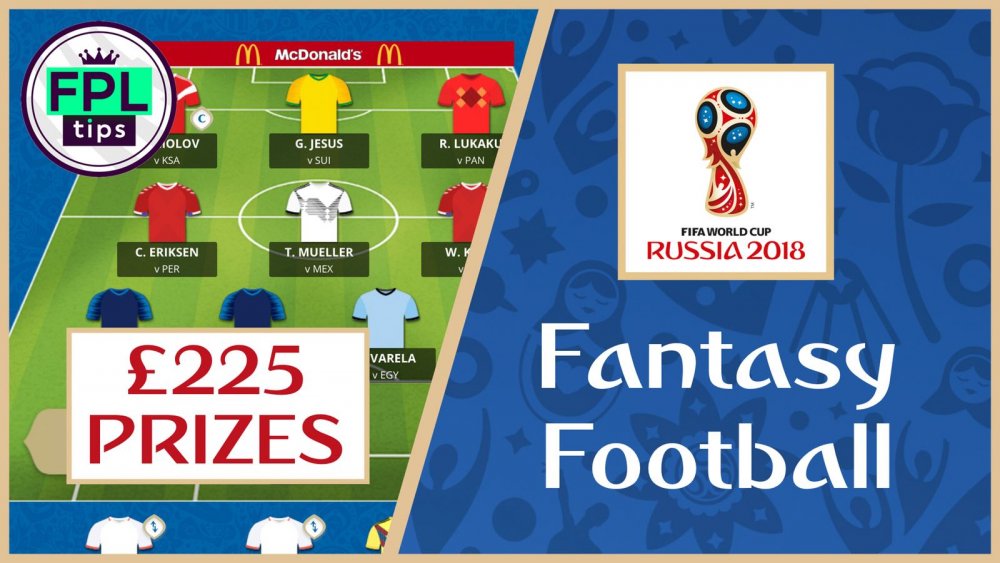 During the group stages you are only allowed to select 3 players per team, in the same formation combinations as the Fantasy Premier League game.

Automatic substitutions occur at the end of a group round of games, if a player hasn’t featured. Your captain will score double points.

You are allowed to make ONE transfer between each round of games in the group stage.

Any unused transfers are lost and any additional transfers will cost 4 points.

After each day of games within a group round, it is possible to substitute a player out of your squad for a player who is yet to feature.

This means that if a player blanks, you can swap them for another, in the quest for more points.

There are some implications here and it pays to be organised. It is worth setting up your squads with 15 starters, instead of filling the bench with dud players, as they are all capable of scoring points for your team.

It is worth noting that substitutions cannot be reversed and must satisfy the formation constraints.

My advice would be to select two starting goalkeepers and check the fixtures to ensure that they never play on the same day, to maximise points.

When selecting cheaper players for your squad, it may be best to prioritise those from Groups A-D, as they will play earlier in each round.

If they return, then great – but if not, you then have the option to replace them with a stronger player on a subsequent day.

Similar to the format for manual substitutions, it is possible to change your captain between days in each group round.

With the early rounds spanning as many as six days, look to have a variety of options across the period in your squad.

Plenty of choice means that if one player fails, you can give another player the opportunity to perform.

You may hit a “stick or twist” scenario in the final couple of days in each round, where you may want to gamble a lower point captain return, for the potential of a greater haul.

There are three chips, called ‘boosters’, to use: Wildcard, Bench Boost and Maximum Captain.

Once a chip has been activated, it isn’t possible to cancel it.

Managers are given a wildcard to be used at some point in the tournament.

My gut feeling is to use this during the group stages; either building a team for round 1 and then using the wildcard for round 2, or using it for round 3 where some teams maybe have won their group already and have the opportunity to rest players.

Bench Boost works in the same way as Fantasy Premier League, where all players in your squad earn points.

This may be good to use in the Round of 16 or Quarter Finals, where an increased budget allows for a stronger bench. Extra time gives more opportunity for points and teams will be going all out for a win.

The Maximum Captain chip selects the highest scoring player as your captain.

Given the flexibility in changing your captain, I’m planning to use this chip later in the competition: with less game days for the Quarter Finals, Semi Finals and Final, it’s much trickier to land on the right player.

The main format of the scoring system is very similar to Fantasy Premier League.

There are just two key differences, with many pleased that there are no bonus points! 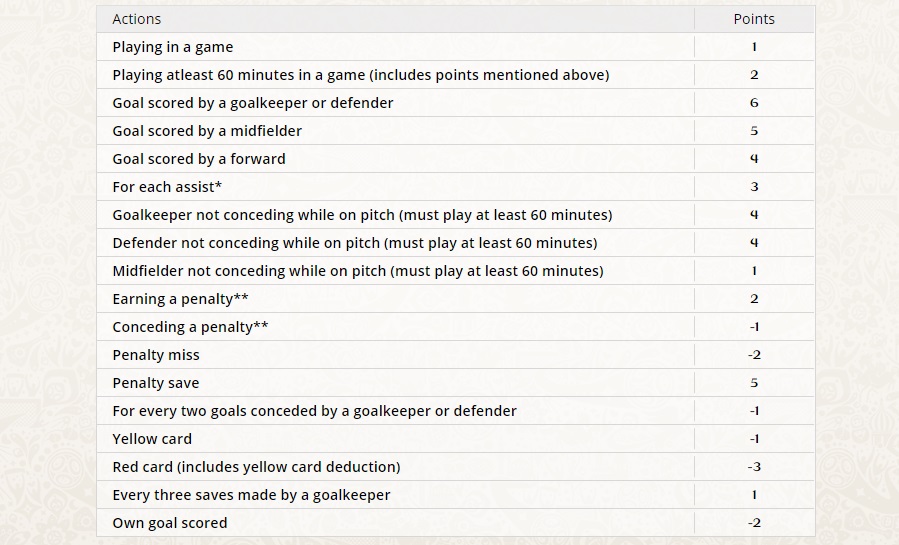 Elsewhere, there are some alterations to points surrounding awarding of penalties: a player gets 2 points for earning a penalty and loses 1 point for conceding a penalty. With VAR in use at the World Cup, this scoring could come into play a lot!

It’s important to have an eye on the deadlines, particularly in the group stages.

Here are all the important deadlines:

The scheduling for the 2nd and 3rd Group Phases are confusing, as some teams are still playing their first game, as others begin the second.

We’ve focused mainly on the group stages here, but we will be publishing further articles throughout the Group Stages, as we plan for the Round of 16 and Quarter Finals so keep your eye out for those.

When the knockout phases come around, managers are given unlimited transfers and addiotional free transfers between the subsequent rounds.

There are just one set of price changes, which come at the start of the knockout phase.

Managers are handed a $105 million budget at this point, and the option to select more than 3 players from each team.

BEFORE YOU GO… Be sure to join our McDonald’s World Cup Fantasy Football League by clicking the prize pool banner below – there’s £225 up for grabs and entry is completely FREE!