Harry Kane set to lead the line in the @_FPLTips’ team for Gameweek 11, but who gets the boot?

Like most Fantasy Premier League managers, we’re eagerly awaiting the outcome of tonight’s Tottenham vs Real Madrid Champions League clash at Wembley, to see how our boy Harry Kane gets on.

I’d like to think his absence from Spurs squad in Gameweek 10 squad was more precaution rather than injury, knowing they had a huge game on their hands against Ronaldo and Co midweek.

With only one transfer for the FPLTips team ahead of Gameweek 11, let’s see how they’re shaping up ahead of the weekend’s Premier League fixtures and who their captain could be.

As always, we invite you to read our Gameweek 11 article and then check out the YouTube video above for all the stats and glossy graphics which help support our picks and findings.

Please subscribe to our FPLTips’ YouTube channel for even more Fantasy Premier League tips, news and insight, each and every FPL gameweek, straight to your desktop or mobile device.

Having temporarily sold the Spurs forward as part of 2 free transfers last Gameweek, there is an easy route to get Harry Kane back in for Gameweek 11, if he’s set to start against Crystal Palace.

He’s taken part in full training for Spurs ahead of their midweek clash with Real Madrid in the Champions League, so Kane’s return is looking promising at this stage. 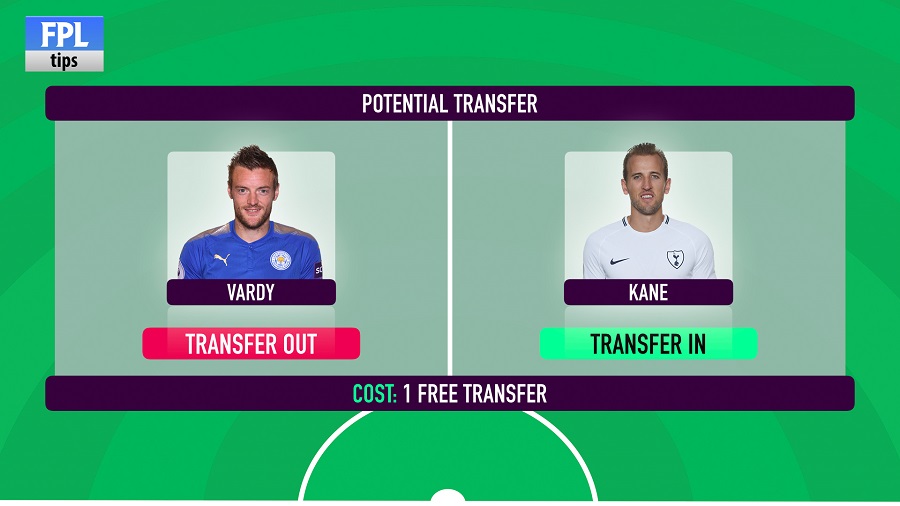 With over £5m remaining in the bank, Jamie Vardy will be the man to make way, should Kane be deemed fit to start at the weekend. The Leicester forward finally returned to the scoresheet against Everton last Gameweek and that goal will make for a nice parting gift.

We’ll be hanging on for more news before making the transfer, but he’s how we’re likely to lineup for Gameweek 11.

There’s a choice to be made between the sticks as Rob Elliot lines up ahead of Newcastle home game against Bournemouth, while Ben Foster provides an alternative option, with West Brom travelling to Huddersfield.

Tony Pulis’ side have failed to keep a clean sheet since Gameweek 5 and are weakened by the injury to Craig Dawson, so it’s the Newcastle goalkeeper who gets the nod.

It could be an unchanged defence from last Gameweek, with Cedric Soares facing Burnley at home, Phil Jones travelling to Chelsea and Ben Mee lining up against Southampton.

Southampton and Burnley have struggled for goals this season, with each team having scored 9 times so far; only 5 teams have scored fewer goals.

Despite a potentially tricky away trip to Stamford Bridge for Manchester United, Phil Jones remains an option, having secured 8 clean sheets already this season; keeping out Spurs and Liverpool during the last 3 Gameweeks.

Kyle Naughton offers an alternative, however, with Swansea hosting a Brighton side that have scored 5 times over the last 4 Gameweeks. Pascal Groß has been a consistent threat this season and he’s the main reason for benching the Swansea defender, as things stand.

It’s a return to a four-man midfield, as Christian Eriksen lines up against Crystal Palace.

Despite their positive result last weekend, Roy Hodgson’s side have conceded 8 goals over the last 4 Gameweeks; only Everton, Stoke and Huddersfield have conceded more.

After starting on the bench for each of the last 2 Premier League games, we’re hoping Raheem Sterling has done enough to warrant a starting place when Man City host Arsenal this weekend.

The Man City midfielder has provided 4 goals and 2 assists during his last 4 appearances and only 4 players have taken more shots from inside the box, within the same period. 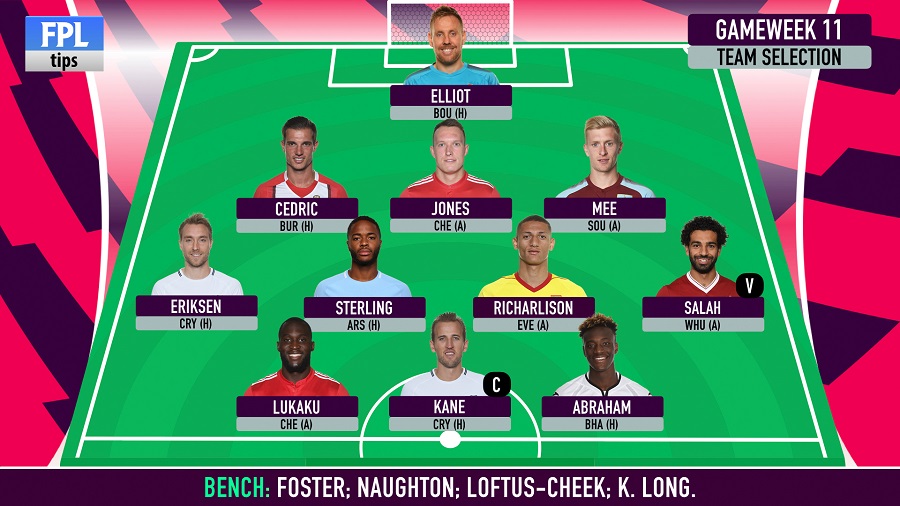 The @_FPLTips squad for Gameweek 11

Richarlison will get another chance against Everton in Gameweek 11, after failing to get on the score-sheet last weekend.

He’s taken more efforts from inside the box than any other midfielder, during the last 4 Gameweeks but only 3 of his 19 shots have found the target.

Finally, Mohamed Salah will travel to West Ham in Gameweek 11. His 7 shots on target over the last 4 Gameweeks are more than any other midfielder has managed and only Harry Kane has taken more during that period.

Despite failing to score in any of the last 3 Premier League games, Romelu Lukaku has provided assists for both Manchester United goals over the last 2 Gameweeks.

It’s a tough away trip to Chelsea for Jose Mourinho’s side in Gameweek 11 but confidence will be high, following the win over Spurs.

Harry Kane is likely to come back into the team if he comes through midweek and looks set to start against Crystal Palace.

Despite missing Gameweek 10, the Spurs forward has still provided more goals and shots on target than any other Premier League player over the last 4 Gameweeks.

Finally, Tammy Abraham will come into our starting lineup, after we opted to start Ruben Loftus-Cheek ahead of the Swansea forward in Gameweek 10.

He’s been directly involved in 5 of his team’s 7 goals in the Premier League; scoring 4 times himself and providing 1 assist.

Mohamed Salah deputised as our captain last Gameweek and in the event that Kane is not available for the weekend, it will likely be the Liverpool midfielder who captains our team once again, for their fixture against West Ham.

The Hammers have conceded 6 times over the last 4 Gameweeks and only Watford (10) and Stoke (11) have conceded more big chances (9) during that period.

But if he’s available, Harry Kane will be coming into the team and taking that captain’s armband, ahead of the home fixture against Crystal Palace.

BEFORE YOU GO: Join the FFPundits staff in Gameweek 11 over at Starting 11 this Saturday and Sunday for some LIVE, daily fantasy football action. Keep your eyes peeled for some cool prizes and follow the download links below for iOS and Android to get involved.

Thank you for reading ‘Fantasy Premier League Tips – Gameweek 11: Team Selection’ which was written and produced by @_FPLTips