Wednesday’s UEFA Champions League sees the clash of two of Europe’s footballing goliaths as Manchester City take on Real Madrid, while a certain Portuguese great of both these cities takes his Juventus side to face Lyon.

Cristiano Ronaldo vs Lyon you say? We wouldn’t mind some of that when it comes to fantasy football, that’s for sure. And that’s exactly what we’re going to do in FanTeam’s UEFA Champions League €5000 and €15,000 Wednesday Pursuit.

Well, let’s quickly answer that little question and then we’ll get onto our team.

In Pursuit contests on FanTeam.com, the cheaper the team lineup you pick, the more points you will start the tournament with – like a reverse handicap.

Each 0.1m is worth 0.05 points to you as a head start. Pick 4 players, including a captain (who scores double points but is double his cost) and away you go.

Now, there are only 2 fixtures on Wednesday night (Lyon vs Juventus and Real Madrid vs Manchester City) and only 4 players to pick, so there’s a couple of ways to skin this cat.

We could either spread the risk and pick across the 4 teams – or, be bold and put all our eggs into the one basket. That’s what we like the sound of!

A clean sheet for an Italian side is never worth betting against, so we’re going to double up on that Juventus back-line, with Bonucci and Sandro getting the nod, making it a triple up across the board with Christiano Ronaldo spearing the attack as our captain.

Joining the 3 Juventus stars is arguable the best midfielder in the world – Mr Kevin de Bruyne.

We can’t watch him tear it up in the Premier League week in, week out and not select him here.

Real Madrid are unpredictable at best, and if anyone is likely to unpick their rocky defence, KDB is surely the man. 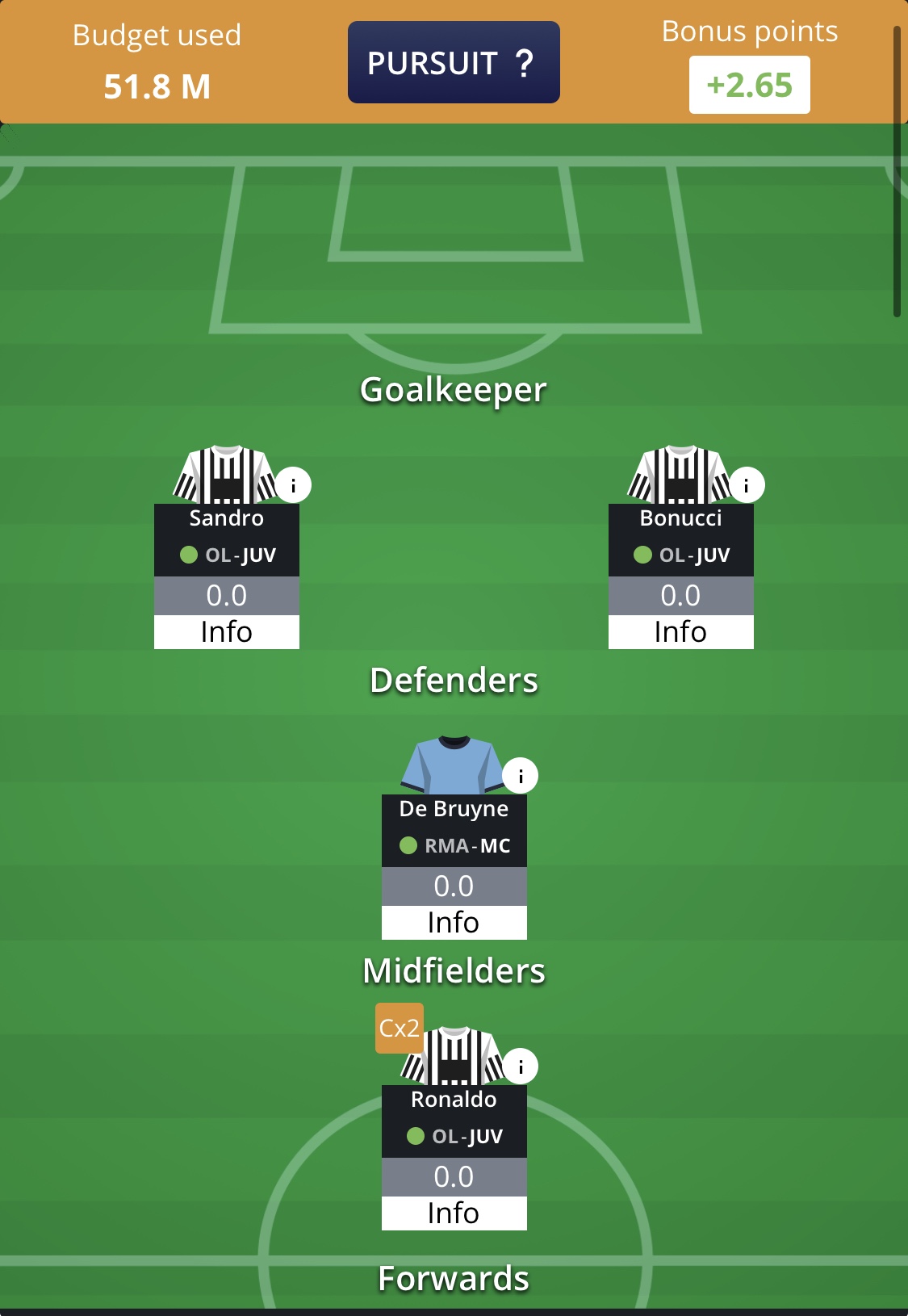 As you can see, this takes up 51.8m of our 57.1m budget, leaving 5.3m in the bank. This translates to a head start of 2.65 points for us – not bad when you look at the quality of the players we’ve managed to get onto the pitch.

If you want to chop some more budget from your team and give yourself a more substantial lead before a ball is kicked, then that’s a perfectly valid strategy.

There’s a massive €20,000 in GUARANTEED prize-pool money to be won in tonight’s (Wednesday) Champions League Fantasy Football action on FanTeam.com.

Pick what YOU think will be the highest scoring fantasy football players from the Lyon vs. Juventus and Real Madrid vs. Man City games only, and win your share of the huge prize pool.

To Ronaldo or not to Ronaldo – that’s the question… Click the banner below to enter your lineup ahead of Wednesday’s 8pm GMT deadline. Good luck!

Reckon you can tip the balance in your favour? Show us your teams on Twitter @FFPundits once you’ve registered via the banner above and let’s see what you’ve got.