Is now the time for Fantasy Premier League managers to ditch their attacking Wolves assets – @FPL_Swe explores our options.

[Article written and published by @FPL_Swe]

After a few disappointing games, FPL managers are beginning to lose patience with their Wolves attacking players – but, should you transfer them out and follow the crowds, or, keep them?

After failing to delivery any attacking returns in their last three outings, both Jiménez and Traoré are currently the 2nd and 4th most transferred out players this week, at the time of writing.

In Gameweek 22, Wolves played an injury-riddled Newcastle team that were struggling in defence, yet still only managed to score one goal.

However, the margins are extremely small when it comes to FPL and we must remember that when writing such articles.

If Dubravka didn’t make that amazing save from Jiménez’ header, that would have been assisted by Traoré, fantasy bosses would most likely be holding both players.

So, should we sell or hold – that’s the question.

The stats in the above tweet show that Wolves’ form right now, isn’t the best.

Jiménez is taking plenty shots at goal, but most are further out than you would like – and Traoré isn’t shooting at all, but he is providing some key passes.

The main thing I look at here is Jiménez and how he hasn’t been a key play-maker of late. He is now 4th in the league when it comes to xA (expected assists) but in his last 2 outings, he hasn’t made a single key-pass.

For those of us that do look at underlying stats and reasons about why a key player isn’t delivering the FPL returns we’d expect, the breakdown above would be enough to concern any FPL manager who owns him, in my opinion. 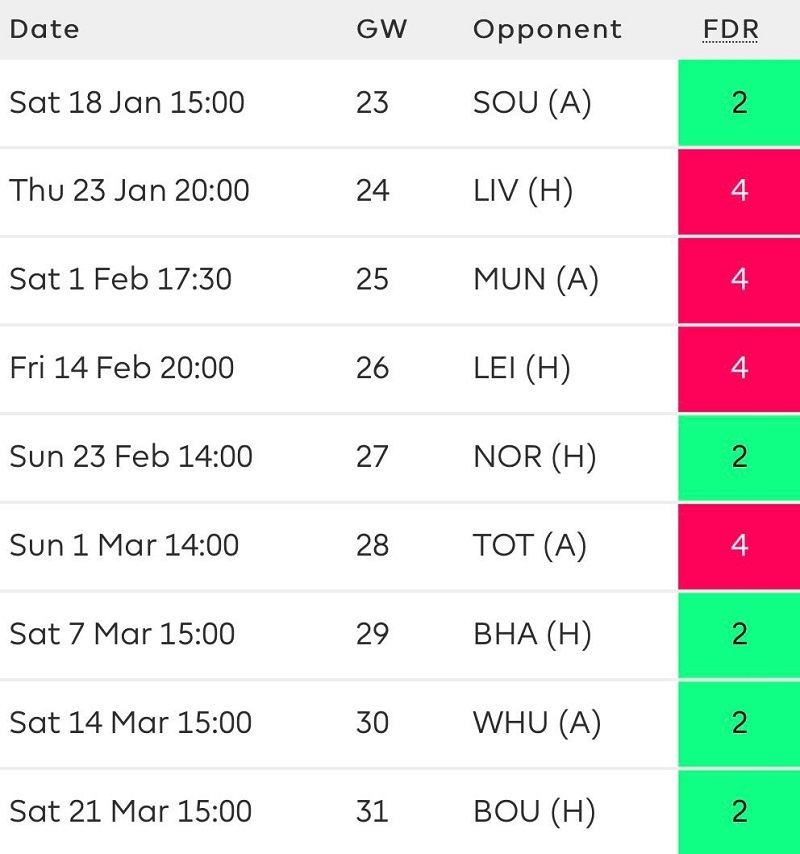 As you can see in the image above, the fixtures look ugly for Wolves, on paper – and to make things worse, Wolves play the two best defences in the league recently in Gameweek’s 23 and 24.

After that, they have a few tough games against Man United, Leicester and Spurs. However, when it comes to Wolves and especially in Traoré’s case, you have to look at which teams play with a high defensive line.

It isn’t a coincidence that his 3 double-digit hauls have come against Man City (twice) and Spurs, respectively.

So, therefore, I like the fixtures between Gameweek 25 and 28 for Traoré, believe it or not.

Jiménez on the other hand is a bit different, because you pay a lot more for him and usually, for me, would like to bench him against opposition like – these but would you want to bench a £7.5m Forward when there are so many other (some cheaper) attackers putting up big numbers?

I believe most people would answer no to that question, in my opinion – and, at the time or writing and publishing this article, Jiménez has now been transferred OUT by 125,000+ FPL bosses ahead of Gameweek 23.

So, FPL bosses, should we keep or sell Jiménez/Traoré?

If Jiménez blanks against Southampton in Gameweek 23, he most likely will be the most transferred out player next week, because there are a ton of other options that are in better form and four blanks in a row would be too much for most of us, right?

Traoré is a bit different. He isn’t as expensive as Jiménez and there aren’t many better midfields in the same price range.

You could happily bench him most weeks or rotate with the likes of Cantwell and to top it off, I like his fixtures between Gameweek 25 and 28 so, no strong urge to sell him.

However, if you have the money for a Richarlison, Mahrez etc, I would obviously go for them – but most of us don’t have that luxury right now.

The obvious move for me is Southampton’s star-man, Danny Ings. Ings is also the most transferred IN player for Gameweek 23.

Ings was unlucky to score just 5 points in Gameweek 23 – having taking 8 shots at goal inside the box, where two struck the crossbar!

Over 250,000 Fantasy Premier League managers have now (finally) brought the £6.8m striker in to their lineups this week, but have they missed the boat?

If you already have Ings in your squad, check out my Budget and Premium suggestions below.

Maupay’s form isn’t great, having blanked in back-to-back games and his underlying stats aren’t great either – so why am I recommending him?

Well, he plays both Aston Villa at home and Bournemouth away in Gameweek 23 and 24. Enough said?

Dominic Calvert-Lewin had 3 big chances in Gameweek 22 and a goal ruled out by VAR.

He looks very involved in an attacking Everton side under new manager Carlo Ancelotti and looks to be a 90-minute man, so seems safe from an FPL perspective.

His fixtures are also look great (on paper) – playing West Ham (without Fabianski) away and Newcastle at home in Week’s 23 and 24.

If you have some spare cash floating about, then I would look at Firmino, Aguero andpossibly Rashford.

Rashford has a tough fixture against Liverpool away, but he did score against them in the reverse fixture back in Gameweek 9. After the ‘Pool game, the United striker has two home games against Burnley and Wolves and to top it off, his underlying stats are great!

After netting a hat-trick in Gameweek 22, I have to mention FPL’s golden boy, Sergio Aguero. There is always a rotation risk with Aguero and Jesus and with Champions League games coming up, he’s a risky buy – but with high reward.

His upcoming fixtures aren’t amazing, but it doesn’t seem to matter for him. He is expensive, but if you think he’ll get plenty of minutes and will be worth the risk, let’s go for it!

Finally, Bobby Firmino remains a massively underrated differential right now, as his overall ownership remains under 10% – but I cannot see that last much longer, with Double Gameweek 24 just around the corner.

He has scored 7 goals in away games this season compared to the more popular Mané (4) and Salah (1) and guess what – both of Liverpool’s Double Gameweek 24 fixtures against Wolves and West Ham are away games… All aboard.

He is a uber differential right now and if you have the cash and spare Liverpool spot to accommodate him, I strong suggest doing so.

Thank you all so much for taking the time to read my debut article for the Fantasy Football Pundits – and if you have any questions or would like to continue the discussion, you can contact me on Twitter – @FPL_Swe

Thank you for reading ‘Fantasy Premier League Tips – Should FPL managers sell their Wolves attackers?’ which was written and produced by @FPL_Swe