[Article written and published by @FFPundits]

Good day to all Fantasy Premier League bosses around the world and welcome to our Pundits’ Staff Team preview for this weekend’s Gameweek 25 action.

Before we discuss our planned transfer moves and thoughts, let’s take a quick look at how our FFPundits Staff team performed in Double Gameweek 24.

Our chosen trio of Liverpool assets amassed exactly 60 points between them over Double Gameweek 24, with our Triple Captain Mo Salah scoring a massive 48 of those.

Trent Alexander-Arnold (12 points) and Gomez (8) contributed well to our Gameweek score of 105 points – leading to a huge rank jump from 27K to 8K overall.

Our decision to sell Danny Ings for Sebastien Haller ahead of Double Gameweek 24 proved worthwhile, but as expect, the West Ham striker was unable to produce attacking returns against a solid Liverpool defence.

The plan was always to bring Danny Ings back in after the double, as West Ham’s upcoming fixtures against Manchester City, Liverpool (again) and Arsenal don’t excite us.

Elsewhere, away from the Double Gameweek madness, Sergio Aguero (4) and KDB (7) delivered reasonable enough returns – especially with Aguero getting only 23 minutes off the bench. 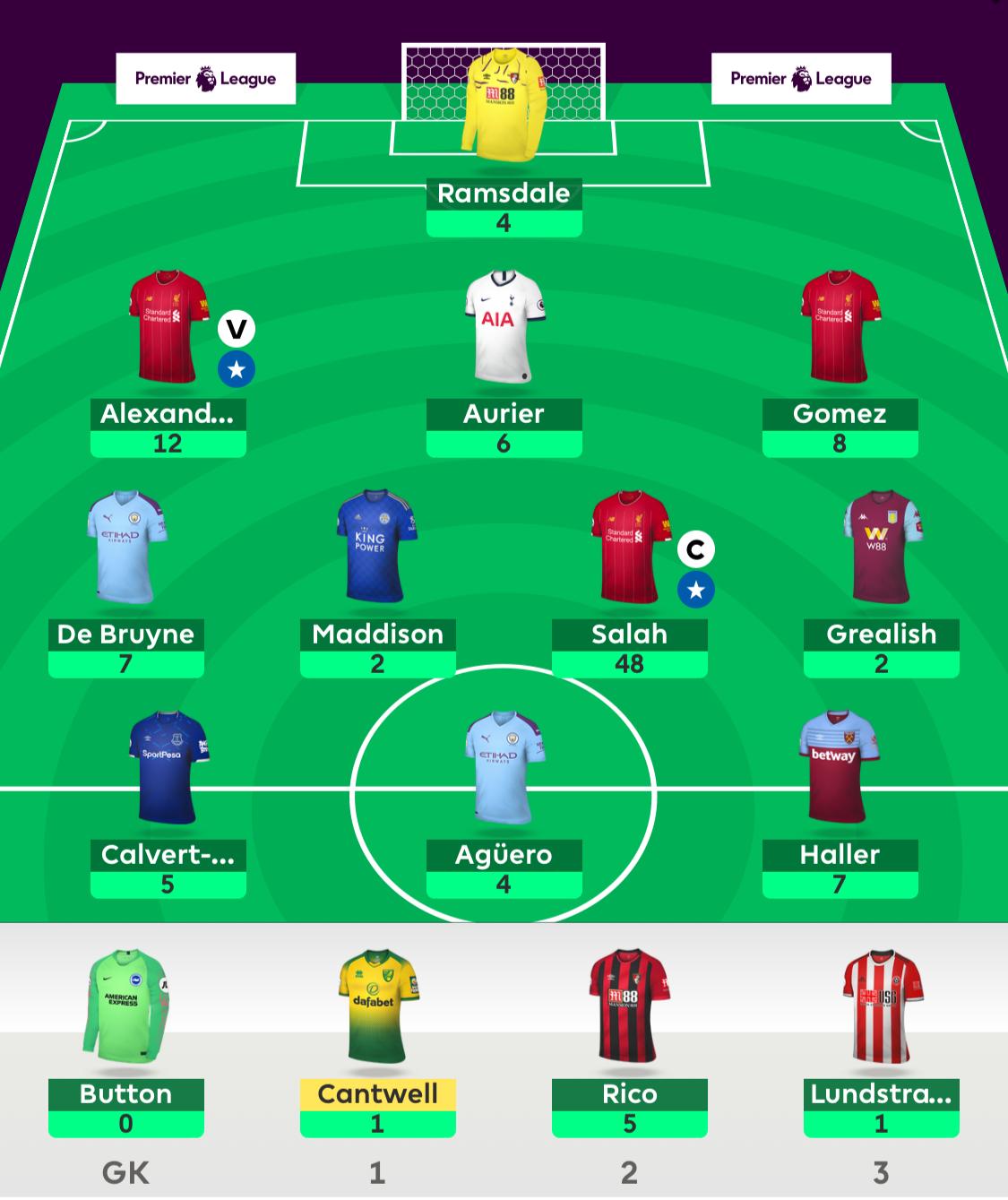 Ramsdale (4) and Aurier (6) added defensive returns to our back-line, but owning the Bournemouth ‘keeper isn’t something we’d like to continue for much longer.

James Maddison produced his third consecutive Gameweek score of TWO and with fixtures against Chelsea and Manchester City in Leicester’s next three outings, it could be time to say goodbye.

Our budget differential striker, Dominic Calvert-Lewin, is still priced at only £6.1m and owned by only 10.8% of Fantasy Premier League managers at the time of writing, played his 9th straight 90-minute outing for Everton.

His returns continue to be little and often, picking up 5 points in their 2-2 draw against Newcastle – 1 goal and 1 yellow card but no bonus points.

We’ll keep this part of the article short and sweet as we’ve made no transfers this week, even though we were tempted to make one. But let us explain.

With upcoming blanks for Arsenal, Manchester City, Aston Villa and Sheffield United in Gameweek 28, we’ve decided to roll the transfer this week, leaving us with 4 free transfers to use between now and Week 28.

Our trusted Liverpool duo (Trent Alexander and Gomez) keep their place at the back in our starting 11, after delivering healthy returns in Double Gameweek 24 it’s hard to consider selling either of them right now.

We were tempted to shift Lunsdtram OUT this week due to his recent game-time concerns, but, the thought of doubling up on Bournemouth (Ramsdale and Rico) at the back or playing Aurier against Man City didn’t appeal, so, by default Lundstram gets the start for us, but this could be his last.

James Maddison is also on the chopping block, having blanked in his last 3 outings – however, he keeps his place this week in the hope that Vardy’s return will give him the spark he needs.

Grealish, KDB and Calvert-Lewin are set-and-forget players for us for right now – but, we’ll decide what to do with a few of them nearer the Blank Gameweek 28 schedule.

Sebastien Haller was meant to be a one-week punt for Double Gameweek 24 – however, a home fixture against a Brighton side that just conceded 3 to Bournemouth is seems attractive so, he stays one more week.

After Mo Salah’s heroics in Double Gameweek 24 and his sheer dominance of our Gameweek 25 Captains Poll on Twitter, one might ask why we aren’t awarding him the armband for Gameweek 25.

Well, after two days of back and forth discussion, the writing team here at FFP were split on Aguero vs. Salah – however, we’ve decided to follow our gut instinct on this one and go with Sergio Aguero as our Gameweek 25 captain, and there’s not much logic to it, if we’re honest.

Spurs have kept just one clean sheet in their last 11 outings in all competitions, with their most recent clean sheet loss against Norwich at home in their 2-1 win in Gameweek 24.

Aguero has been in the starting lineup in Man City’s last 3 outings against Spurs, scoring twice and assisting two. In the same 3 games, it’s worth noting that Kevin de Bruyne also started in each fixture and produced five (5) assists.

With Sadio Mane still sidelined with a hamstring injury, Mo Salah appears to the safe and logical captaincy pick for Gameweek 25 – but, this week we’re going to follow out gut instinct and hope that Aguero both starts and delivers against Spurs. 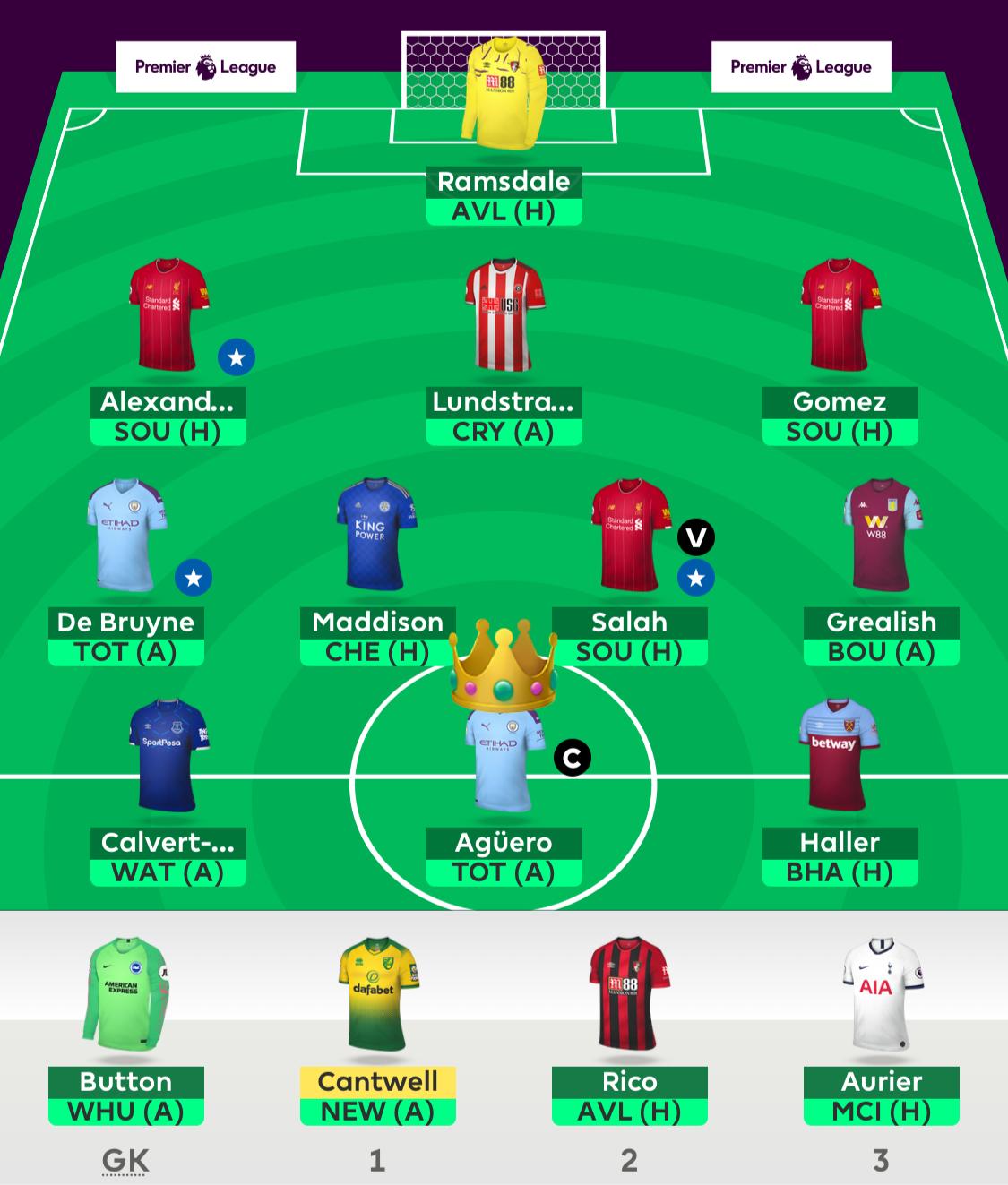 As always, from all of us here at FantastyFootballPundits.com, we wish you the very best of luck with your teams for Gameweek 25 and may your arrows be green.

BEFORE YOU GO… Here at the Fantasy Football Pundits, we’ve been quietly playing and enjoying SportStack behind the scenes for a few weeks, and have now decided to introduce it to our loyal Fantasy Premier League followers and readers and make it a part of our weekly content offering.