The FFPundits' Staff Team is locked in for Gameweek 1

Let’s be honest bosses – if we had until Christmas to finalise our Fantasy Premier League drafts, we still wouldn’t be ready – would we?

Well folks, lock down those teams and strap yourselves in as the 2019-20 FPL season has almost arrived!

If you’ve not already read them, our first draft article was published shortly after the 2019-20 launch day and was followed up when be climbed on-board the Kane Train a week or so later.

Our current plan, like most of you, is to concentrate on the opening 4 or 5 Gameweek fixtures and attack those as best we can, in the hope we get off to a good start.

Once we’ve seen which players hit the ground running, then potentially look to activate our Wildcard and adapt our squads for the first half of the season.

Below you will find our final Fantasy Premier League team for Gameweek 1 of the new FPL season and as always, we welcome feedback, ideas and friendly criticism on Twitter via @FFPundits and @FFPundits_Drew

We’d be lying if we said this draft was 110% locked in, as we’ve all got itchy fingers at FFP so, please make sure you check for updates on Twitter between now and Friday at 7pm, just in case.

BEFORE YOU CONTINUE… As things stand, only 3000 FPL bosses have entered FanTeam’s £250,000 cash league, yet the top 1250 are paid out… if you’ve thought about entering and haven’t yet done so, what on earth are you waiting for? Now’s the time! [click banner below for info]

Sigurdsson OUT – Lucas Moura IN

As soon as the fixtures were announced, Everton stood out as a team that not only had fantastic early potential – but were also a side we felt could challenge for the top 6, especially with new signing Moise Kean leading the line.

Sadly, FPL budgets get tighter each year and paying £8.0m for Sigurdsson becomes harder to justify – we’ll tell ourselves Everton can’t be trusted, but in truth it was a difficult decision to lose Siggy with very little logic behind it, other than budget purposes.

In his place comes Tottenham’s Lucas Moura (£7.5m), who we see as both a short-term punt as well as the key to opening a door for other £7.5m midfield options after Spurs’ Gameweek 1 game against Villa.

Yes, we already have Harry Kane, but a home fixture against newly promoted Aston Villa feels like one we need to cash in on – with Son suspended and Alli injured, Moura is nailed for the opening weeks in our opinion so we’re confident he’ll deliver.

Our current plan is to enjoy Moura’s brace vs Villa, then ditch him for Gameweek 2 for either Christian Pulisic (£7.5m) or Anthony Martial (£7.5m) – both players on our Watch-list but we’d prefer to see who passes the eye test at Old Trafford first.

Dendonker OUT – Fraser IN

Next up is a player we really rate and have now (finally) been able to accommodate in our Gameweek 1 squad. 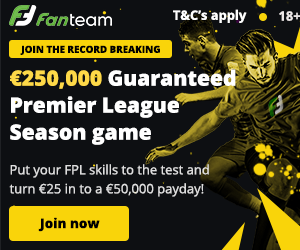 We already own team-mate Josh King, mainly due to his bargain price and penalty duties – but given the opening fixtures for Bournemouth, we felt having only one Cherry just wasn’t enough.

With Kane up top, we don’t really have room for Callum Wilson – so we opted for the other have of last season’s double act.

A home fixture this in Gameweek 1 against Sheffield United is followed up with a trip to Villa Park – it doesn’t get any better than that (on paper) does it!

Admittedly, there is then the small matter of Manchester City visiting the Vitality for Gameweek 3, however, the ‘green’ fixtures then run all the way to Gameweek 7.

We plan to have activated our Wildcard well before Gameweek 7, however, it’s good to know that if we get off to the good start, we have the flexibility to sit on this squad a little longer than we first planned or hoped.

Coleman OUT – Digne IN

We’ve had to make a complete U-turn with regards to our Everton full-backs, sadly.

Those of you with us back in June will remember that our first draft had Lucas Digne (£6.0m) in – only for us to remove him in July in an attempt to save the extra 0.5m.

Since then, Everton have confirmed the Transfer Deadline Day signing of France defender Djibril Sidibe on a season-long loan from Monaco – a right back…

While we expect Coleman to start the season and battle for his first team place, Sidibe isn’t here to sit on the bench – he will get opportunities and we expect Sidibe to be Everton’s first-choice by the end of the season.

Alexander-Arnold OUT – Wan-Bissaka IN

No more double Liverpool defence for us ahead of Gameweek 1 – a mistake FPL bosses?

It’s not that we don’t fancy them to keep clean sheets in their opening 4 or 5 games, or that we don’t think TAA will deliver attacking returns – but that £7.0m is a big chunk of our FPL budget that we feel could be better spend elsewhere until we’ve seen a few games first.

We have decided to hold onto van Dijk, as he’s likely to be the first name on Klopp’s team-sheet every week, but the £7.0m tied up in TAA has now been released to free-up funds for further up the pitch.

Trust me when we say this – we aren’t happy with this move, but stay with us.

In Trents place comes Manchester United’s new signing, Aaron Wan-Bisakka (£5.5m) – maybe the Manchester United fan in me had some influence here, but this is my gut call so the FFP team have allowed me to roll with this one.

What clinched it for us (me) was the signing of new centre back, Harry Maguire. United’s defence actually looks pretty decent now – especially with David De Gea to marshall them.

We know from last season that Wan-Bisakka is a bonus point magnet and, judging by his pre-season performance , he should be attracting plenty

Yes, United have a tricky opening fixture against Chelsea, but he is nailed to start – saving us a cool £1.5m to spend elsewhere.

Zinchenko OUT – Lundstram IN

We’re over budget! So now to raise some funds.

Well, like a lot of you out there, the 4 or 5 men defence has reverted back to a more traditional 3 at the back.

Zinchenko is likely to start the season, but he will soon become a headache with the likes of Angelino and even Benjamin Mendy all fighting for Pep’s left-back position – a headache we just don’t want.

That Manchester City defence is a minefield, with only Laporte and Ederson showing signs of any reliability for game-time – but at prices we aren’t willing to pay (yet).

Here’s how our draft version 3.0 looks FPL bosses, so, until next time, thank you for reading, we hope we’ve offered you plenty of food for thought and if you wish to continue the discussion on Twitter, drop me a tweet – @FFPundits_Drew

There’s a cool €50,000 for first place prize and the top 1250 places are paid out! What’s even better is that only 2200 managers have entered, so you’re almost guaranteed to land in the cash places.

Thank you for reading ‘Fantasy Premier League Tips – The FFPundits’ Staff Team: Final Draft’ which was written and produced by @FFPundits_Drew