The FFPundits' Staff Team - Locked in for Gameweek 3

Having banked our free transfer in Gameweek 2, we felt spoilt for choice this week, with two free transfers at our disposal. However, we had to make our moves early due to volatile midweek price changes, which is something we don’t like doing but, it had to be done on this occasion.

Whilst our expectations weren’t overly high on both Ryan Fraser and Ayoze Pérez, we couldn’t justify holding on to the pair, as both were set to drop in price by 0.1m midweek.

It’s also worth us mentioning that we did look at Lucas Moura replacements this week – with Son set to return against Newcastle at home, we fear Moura’s minutes.

However, Moura is carrying decent form – scoring two in two and with a home fixture against a leaky and battered Newcastle United, we aren’t willing to risk ditching him just yet.

After putting in a mouthwatering performance against Burnley in Gameweek 2, Arsenal’s Cebellos (£5.6m) was brought in to our team as both a potential starter and a budget enabler.

Cebellos produced 2 assists and picked up maximum bonus points in his 82-minute masterclass display last weekend and was set to rise in price –  we couldn’t afford to wait, so in he came for Perez.

Tricky fixtures against Liverpool (A) and Spurs (H) await him in Gameweek’s 3 and 4, but are soon followed by a string of favourable match-ups where, if he keeps his starting place, could make him the bargain of the season.

With Ozil back in full first-team training, we’re keen to see how Arsenal line-up over the next few games – but that won’t stop us starting him in Gameweek 3 against Liverpool, in what’s expected to be a high-scoring affair.

It was a shame to lose Ryan Fraser so early in the season, as two attractive fixtures on paper gave us and many other FPL bosses the confidence and hope for returns early on. 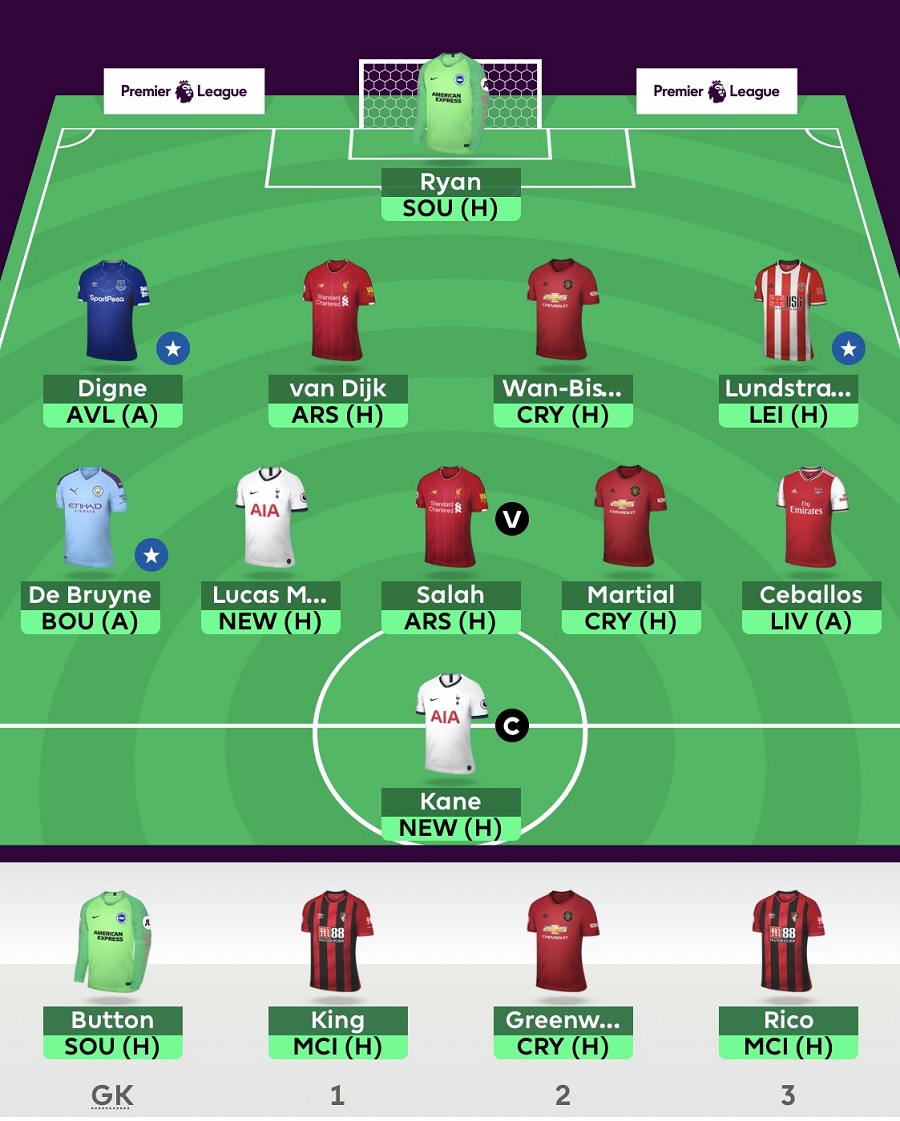 Sadly, it wasn’t meant to be, so we’ve followed the form and value and moved Fraser out for Manchester United’s new no.9 – Anthony Martial (£7.7m)

During our pre-season staff team discussions, I (@FFPundits_Drew) had my heart set on us owning Martial, but, sadly I was outvoted and we opted for Fraser instead.

Having scored once in each of United’s opening fixtures, it’s also encouraging to see that he’s played 90-minutes on both occasions.

Upcoming fixtures against Crystal Palace (H), Southampton (A) and Leicester City (H) and another imminent price rise, was enough for us to pull the trigger and make our move.

Would we have played Lundstram over King this week had he not scored against Crystal Palace in Gameweek 2? We just don’t know – but, a decision had to be made and the thinking was pretty simple.

We don’t expect Bournemouth to score more than one goal against Manchester City in Gameweek 3, but we’d like to hold on to King as the fixtures look favourable once the City game is over with. Pukki is on the radar.

Lundstram is playing out of position and picked up 14 points in Gameweek 2 by scoring 1 goal, a clean-sheet and also received maximum bonus point so, he starts over King for us in Gameweek 3.

Our plan ahead of Gameweek 1 was to ride with Harry Kane over Raheem Sterling. We don’t like it, as we know what Sterling can do and will do – however, until we wildcard, we’ve made our bed and will sleep in it.

In Gameweek 2, during Newcastle’s 3-1 loss to newly promoted Norwich City, the Magpies allowed 15 shots at goal, with 8 of them on target.

The temptation to captain Mo Salah against Arsenal is strong, but, a home fixture for Harry Kane against a battered and bruised Newcastle United is impossible to ignore.

From all of us here at Fantasy Football Pundits, we wish you all the very best of luck for Gameweek 3 and as always, may your arrows be green!