With the FPL Gameweek 1 deadline looming, let’s take a look at how we’ve set our side up going into the 20/21 season openers.

We’ve opted for a decent amount of depth with three substitutes who should all get minutes in order to account for potential fixture difficulties, as well as starting with the most expensive player in each position to allow for a straight swap down to any player in the game, should someone emerge as looking like a must-have in the opening weeks.

Filling the 4.5M GK slot we have Southampton’s Alex McCarthy.

The reason for picking McCarthy was a mixture of reasonably kind opening fixtures, and impressive defensive form post-restart for Southampton, conceding just 8 goals in as many matches, the 5th best record in the league over that period, and the addition of Mohammed Salisu (4.5M) could sure up the Saints defence further still.

The Villa ‘keeper took part in pre-season and the tail end of last season, suggesting that he is at least in contention to get some minutes in the Premier League, minutes which could come early on with injuries amongst current Villa goalkeepers, although there are rumours of a move for Arsenal’s Emiliano Martinez (4.5M) which could potentially scupper these hopes.

The first name on the team sheet. Trent has established himself as true FPL royalty over the past couple of seasons, breaking the assist record for defenders two years running whilst also managing to whip a few 25-yard free kicks into the top corner along the way, not to mention being part of the league’s strongest defence.

Dier occupies our 5.0M defender slot, thanks to his fantastic opening fixtures, assured starts, and potential for an attacking return from a corner or set piece.

Spurs also looked to improve defensively since the restart, only conceding 7 goals from 8 games – the 4th best record in the league over that period. “The Mourinho effect” taking hold, perhaps…

With his ability to play on either side of the defence and the absence of Leicester’s two first choice full backs from last season, Justin seems to be very likely to start the Foxes’ opening few games at least. With some kind fixtures to start – (wba) & (BUR) – Justin could offer excellent value early on.

With options looking limited in the 4.5M defender bracket, Walker-Peters looks to be a mostly nailed on full back with some potential for attacking returns, in a Southampton defence which improved after the Premier League restart.

Occupying that highly sought-after 4.0M DEF price point is Tyrick Mitchell of Crystal Palace. He looks set to start the first few gameweeks at least whilst Patrick Van-Aanholt (5.0M) is still out of action following a shoulder dislocation.

The most reliable source of fantasy points over the past three seasons, it’s so difficult to look past the Egyptian king for our GW1 squad.

The abundance of new premium options makes his inclusion less of a no-brainer than in previous seasons, but at a 0.5M discount from his 19/20 starting price, he should still be worth the investment as such a reliable captain option for the home fixtures.

Our second midfielder is Pierre-Emerick Aubameyang (12.0M). With plans to likely move Aubameyang to either Kevin De Bruyne (11.5M) or Raheem Sterling (11.5M), the Gabonian is in all probability a placeholder, but he looks set to provide potentially explosive returns in his first two fixtures of (ful) & (WHU).

This is somewhat of a risk from gameweek 1 as we are yet to see which position Havertz will hold in Lampard’s system, but with our eyes firmly on Christian Pulisic (8.5M), Havertz looks more likely to start gameweek 1, and should he not impress or be deployed deeper than expected, it’s a simple straight swap to the American.

Saint-Maximin showed us all the amount of talent he possesses last season, where he at times felt like the only threatening part of a frankly underwhelming Newcastle attack.

This may be a large part of the reason his FPL returns didn’t match up with what the eye-test may have suggested, and with the acquisition of Bournemouth pair Callum Wilson (6.5M) and Ryan Fraser (6.0M), perhaps Newcastle will carry more attacking threat than last season, potentially opening the way for Saint-Maximin to start delivering the returns we know he has the potential to!

When in need of a cheap enabler, all we’re really looking for is someone who will get minutes. Stephens may not be too involved in Brighton’s attack, but he’s heavily favoured by manager Graham Potter, and that’s plenty enough to sit on our bench until called upon.

Harry Kane makes up our third “premium attacker”. Mr. Consistent starts the season with some very kind fixtures, and carried some vintage form out of Project Restart, picking up 5 goals in Spurs’ last 3 games of the season.

Whilst it is a risk going without 48.7% owned Timo Werner (9.5M), owning the most expensive attacker allows for an easy switch down should any other premium attackers start to look like exploding, be that Werner, Martial, or even Vardy.

As previously mentioned under our Allan Saint-Maximin (5.5M) choice, we’re hoping Wilson can be part of the revival of this Newcastle attack, and with proven Premier League goalscoring pedigree, we think Wilson could provide great value for his price this season.

With such a favourable opening fixture schedule, it’s very difficult to look past Mitrović for value to start this season. We’ll put up with the red/yellow card risk from his often short temper in hopes of a Pukki-esque fast start to the 20/21 season.

Though Aubameyang is an extremely tempting alternative away to Fulham, Mo Salah (12.5M) takes the armband for us for gameweek 1.

No player has been able to match the Egyptian’s consistency at home over the past three seasons, so although we expect Leeds to outperform some expectations and put up a good fight at Anfield, it feels a little like entering overthinking territory by opting against Salah for the captaincy this week.

With only the one transfer planned, we’re staying reasonably flexible with this side to enable us to react to the huge amount of information learned from the first few gameweeks, hopefully without burning through many hits, although we are open to an early wildcard around gameweek 4.

With the blank gameweek complicating matters, we have no current plans to bring in any Manchester United players, so them achieving a fast start is an example of a circumstance where we may be pushed towards playing an early wildcard to get their players in, and build some team value for later in the season. 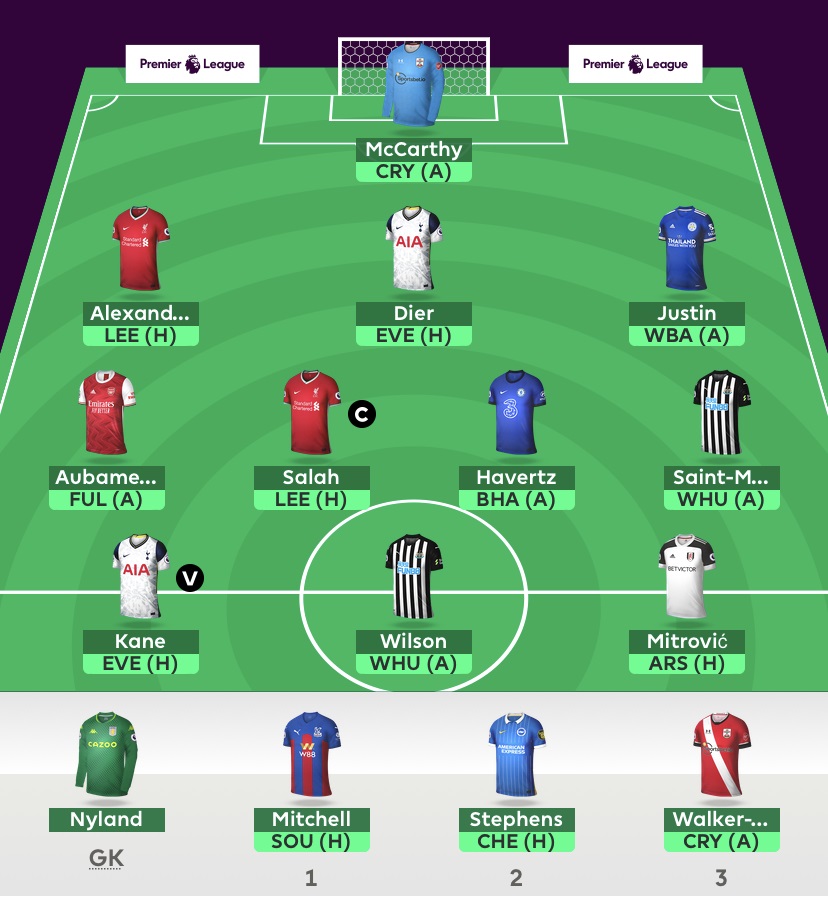 Thank you for reading ‘Fantasy Premier League Tips: ‘The FFPundits Team – Gameweek 1 Reveal’ which was written and produced by FFPundits.