This series follows the FPLtips team throughout the season. Here’s a look at how they got on in Gameweek 11, and their preparations for the Gameweek 12.

With only two changes being made to the FPLTips’ Fantasy Premier League team ahead of Gameweek 12, we’re fortunate enough to have TWO free transfers at our disposal, which have come in extremely handy over the international break.

The decision to swap Sanchez for Hazard was a tough one, but, many of you have done the same so, be sure to check out our reasoning further down the article and see who our 2nd free transfer will be.

As always, we invite you to read the article and then check out the YouTube video below for all the stats and glossy graphics which help support this weeks four picks – and be sure to subscribe for even more Fantasy Premier League tips.

Gameweek 11 saw very few points in defence, with Chelsea being the only team to keep a clean sheet. Once again, only a penalty denied Hector Bellerin his clean sheet, as Arsenal drew 1-1 with Spurs.

West Brom conceded just the 1 goal, as they have done on so many occasions this season, which saw Gareth McAuley return just 2 points. Jose Holebas had a bit of a nightmare against Liverpool, conceding 6 goals and picking up a yellow card to return -2 points. He’ll now miss Gameweek 12 through suspension. 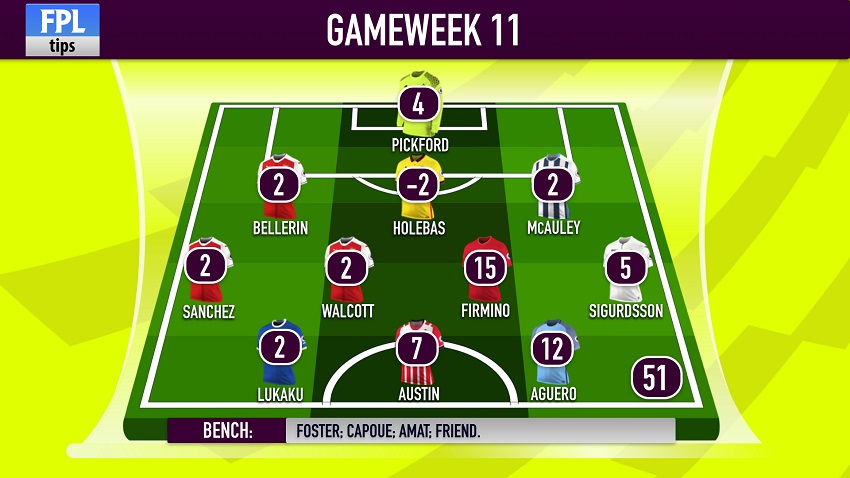 In midfield, the Arsenal pair failed to deliver despite playing fairly good games. Alexis Sanchez had 2 shots on goal and attempted 4 assists, while Theo Walcott hit the woodwork. Gylfi Sigurdsson continued with his steady stream of points, providing another assist in the defeat to Man Utd.

Roberto Firmino was the standout performer in midfield, with 15 points from his 1 goal and 2 assists, as Liverpool comfortably beat Watford, with a 6-1 score line.

As for the forwards, Sergio Aguero scored his team’s only goal in a 1-1 draw with Middlesbrough, but his total of 8 shots demonstrates how many missed opportunities there were for the Argentinian.

Romelu Lukaku barely saw the ball as Chelsea ran riot against Everton, beating them 5-0 in the end, whilst Charlie Austin scored from the spot for Saints, but wasn’t able to prevent a 2-1 defeat.

With Chelsea’s incredible form over the last 5 Gameweek’s, this week’s transfers will be spent bringing in two of their players. Marcos Alonso comes in for the suspended Jose Holebas. 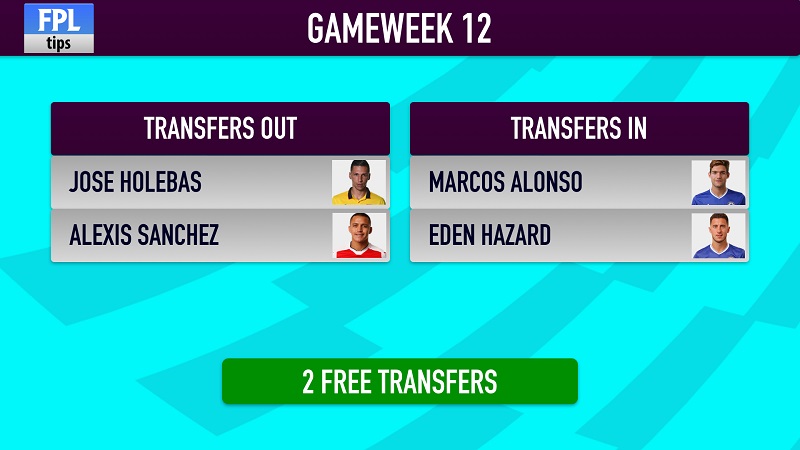 He’s playing as a wing-back in Conte’s 3-4-3 system and has returned 1 goal, 1 assist and 5 clean sheets in just 5 starts so far. Eden Hazard also comes in to the team, in place of Alexis Sanchez. If you haven’t already, please check out the Hazard vs Sanchez article, which explains this decision in greater detail.

Friend comes into the starting lineup. However, with a tough fixture against Chelsea, he looks unlikely to return many points. The rest of the team looks solid and the only big absence is of course Philippe Coutinho, who will come into the team next Gameweek, in place of either Theo Walcott or Gylfi Sigurdsson.

The reasoning behind not bringing in the Brazilian this Gameweek, is due to Liverpool’s fixture being on Saturday, following an international break. Last time this happened, Coutinho was rested and Sturridge started in his place, so there is a small risk of that happening once again.
For captaincy this week, Romelu Lukaku is an option, ahead of Everton’s home fixture against Swansea, where they’ll be looking to bounce back from a disappointing 5-0 defeat to Chelsea. But, it’s hard to ignore Sergio Aguero for City’s away trip to Crystal Palace.

He’s managed 3 goals in the last 2 Gameweeks and that’s why he gets the nod for now.

Thank you for reading ‘Fantasy Premier League Tips: The FPLTips Squad Selection – Gameweek 12’ which was written and produced by @_FPLTips

To help keep Fantasy Football Pundits a free to use service, be sure to click the Google Ads below from time to time to help us pay for writers and running costs. We strive to offer you free, unique content on a daily basis so, any help you can offer would be massively appreciated by us all here at FFP. Thank you guys.