The Future of Esports Betting - How Long Will the Growth Continue?

By now any gamer is well aware of the widespread eSport industry as thousands of lucrative tournaments have been played in Dota 2 and other competitive games the past couple of years.

Any gamer with a passion for gambling also knows that betting on eSport matches can be done at hundreds of great betting sites online. These days odds on eSports are just as commonly found as they are for traditional sports.

According to Pinnacle, which was one of the first bookmakers to offer eSports betting, they saw an exponential growth between 2010 when the first eSport bet was placed and 2017 when they reported 5 million placed bets on eSport matches.

This is illustrated in the image below: 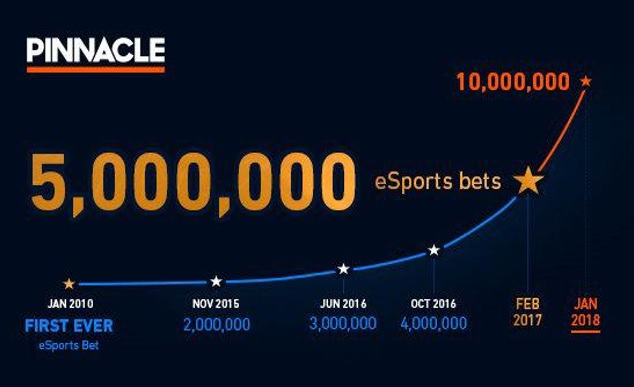 According to thesportsgeek.com, eSports betting is currently close to reaching 10% of the entire sports betting market. This is reflected by affiliates (websites that make money from bringing players to gambling operators), such as GamblingBaba who is recommending several great eSport betting sites.

With facts on the table, there’s no doubt that eSports has become a good stream of revenue for gambling companies that operate online. Competitive video games are a sport that is here to stay and fans of the genre obviously enjoy wagering money on it. The question is, for how long will this growth that we’ve seen continue and how big can eSports betting actually get?

As of now, the answer seems to be for years to come – with no limits to the growth.

Based on a statement from RTSmunity – a provider of eSport betting solutions – the total net profits from eSports betting are currently sitting at approximately $300 million. This company has also stated that these profits are expected to grow to $862 by 2024, indicating a continued growth of considerable proportions.

According to sbcnews.co.uk, a growth like this would place competitive video games into the top 5 sports to bet on. To put this into perspective, most gambling sites are offering odds on about 30 different sports. One could argue though if it’s really fair to compare eSports, which is a collective name for competitions in many different video games, with single traditional sports. Perhaps a more valid comparison would be to compare electronic sports with all sports that aren’t played electronically.

Nevertheless, everything is pointing towards eSports betting seeing a continued increase in the coming years. This is somewhat backed by the analytic company Newzoo who is constantly gathering data from the eSports industry and is projecting a growth of it. Global revenues (not only betting) have gone from $776 million in 2018 to $957 million in 2019 and are, according to Newzoo, expected to reach 1.6 billion in 2023.

If eSports betting does make into the top 5 sports to bet on which some believe it will, our forecast would be that bookmakers will start marketing eSports a lot more. This is currently quite limited in comparison to other sports and gambling products. Now if the marketing increases, this could further boost the interest in betting on eSports as more people would be made aware of it.

In other words, the future of eSports betting is looking very bright.

Not all competitive games are receiving the same love from gamblers though. As reported by Loot.Bet – a gambling operator that has chosen to exclude traditional sports and only offer odds on eSports – CS:GO was by far the most popular game to bet on in 2020. Out of all money wagered on the site, this game accounted for 53%. In second place came Dota 2 at 35% and at third League of Legends with 7%.

While this shows a huge difference between games, it’s not very surprisingly that CS:GO is sitting at the top as this is the game with the most tournaments held. League of Legends, on the other hand, has more tournaments than Dota 2. However, the disparity here can probably be explained by League of Legends having a much younger player base than Dota 2, hence many wouldn’t be allowed to gamble online.

To round out the article, we would like to finish by saying that Loot.Bet reported a growth of 67% more bets placed in 2020 than 2019, along with 59% more active users.