FPL’s most transferred IN player for Double Gameweek 29, Pierre-Emerick Aubameyang is the likely captaincy pick for FPLtips.

Welcome back to the ‘FPL Captaincy Picks’ series, where we’ll be discussing the top 3 Fantasy Premier League captain options for the Gameweek ahead, as voted for by the FPL community over on our Gameweek 29 Twitter Captains Poll.

This week’s ‘Captaincy Picks’ episode will be heavily influenced by the news that Man City’s previously postponed fixture against Arsenal has been scheduled for next Wednesday, causing an FPL Double Gameweek 29.

Either way, we hope you enjoy our Gameweek 29 episode of FPL Captaincy Picks and Tips by FFPundits and FPLTips and as always Fantasy Premier League bosses, may your arrows be green!

Here’s a look through the top 3 captain options, as voted for by you, the FPL community, over on Twitter: 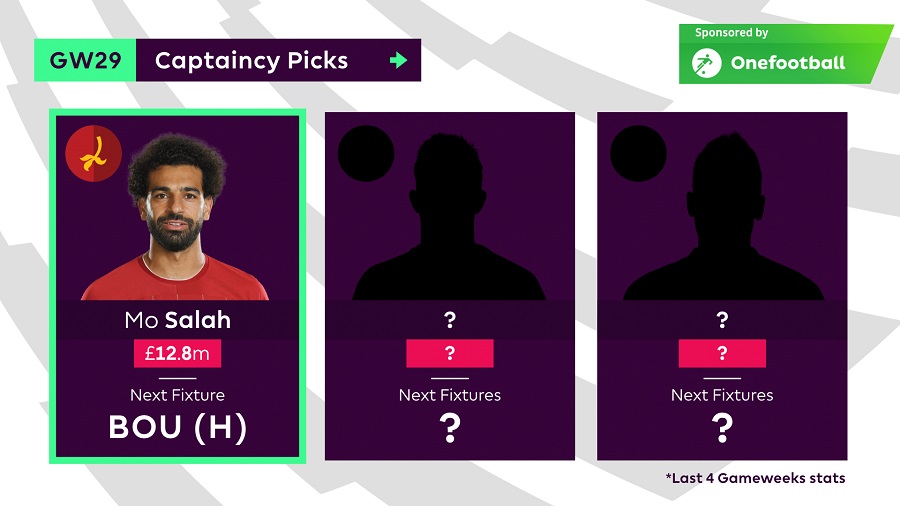 It’s just a single Gameweek for Liverpool but a home fixture against Bournemouth has tempted 18% of voters into selecting Mo Salah for the armband.

The Egyptian has scored in each of his last 4 home matches, amassing 5 goals, to average 10.0 points per game.

Sadio Mané was the only teammate able to match his 5 big chances during that period, while no Liverpool player created as many big chances as his 4.

He’s averaged 8.8 points per game at Anfield this season and that increases to 9.5 when only considering matches played against the ‘bottom 6’ teams.

The 27-year-old has scored in every match he’s played against Bournemouth, bagging 7 goals in 5 appearances against the side.

The Cherries have shipped 8 goals in the last 4 Gameweeks, with only West Ham and Southampton (each 9) faring worse, while only 3 teams have conceded more big chances than their 11. 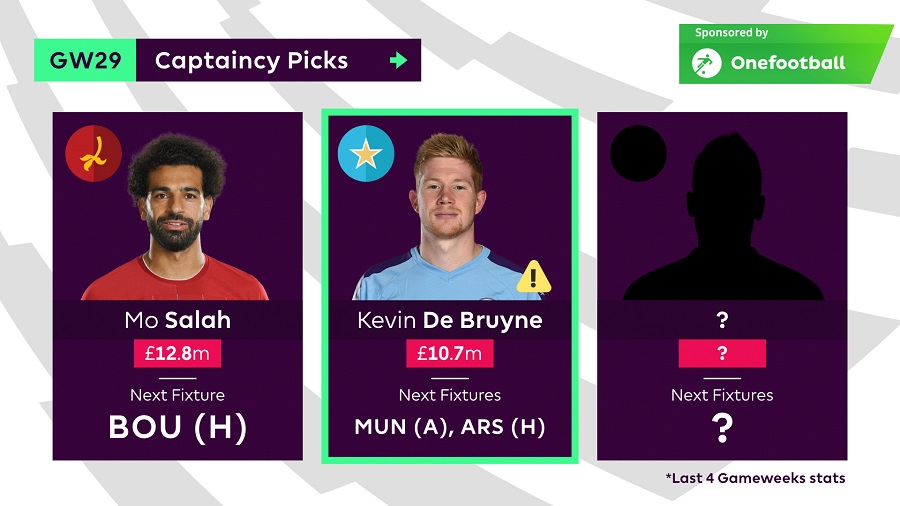 News of the Double Gameweek has pushed Kevin De Bruyne into 2nd place in the poll, claiming 34% of the vote, though he has since emerged as an injury doubt.

The Belgian has been directly involved in 5 goals over his last 6 league outings (1 goal, 4 assists), where he’s averaged 6.2 points per game.

During that period (GW22-27), no player attempted more assists than his 23 and only Salah (6) created more big chances than his 5.

The 28-year-old has averaged 6.5 points per game this season during matches played against teams in the top half of the table.

Only Rashford (12) has been directly involved in more goals than his 11 against those sides (4 goals, 7 assists).

Man Utd have only conceded 1 goal in the last 4 Gameweeks but only 4 teams have allowed more shots from inside the box (40).

Arsenal have shipped just 4 goals in their last 4 matches but they’ve conceded 14 big chances; only Aston Villa (20) have fared worse. 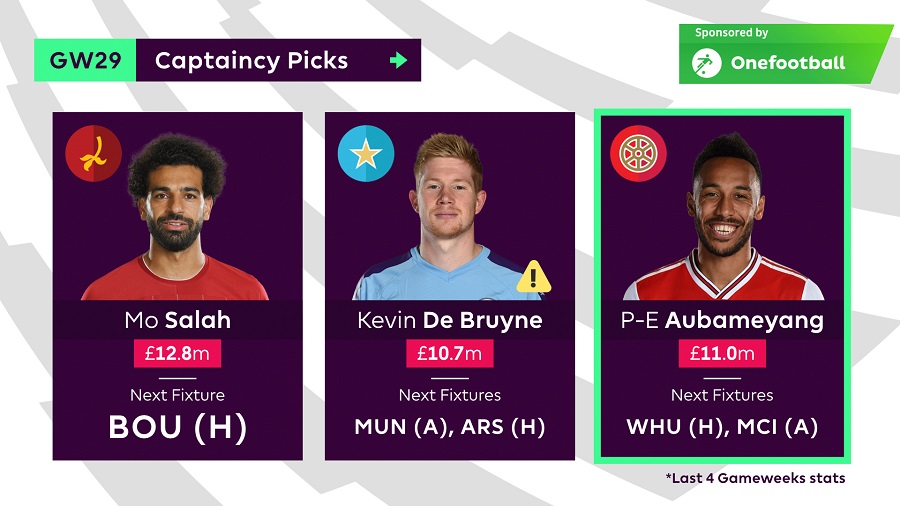 With 44% of the vote, Pierre-Emerick Aubameyang leads the poll ahead of fixtures against West Ham and Man City in Double Gameweek 29.

The Arsenal forward has averaged 6.0 points per game this season and that’s risen to 6.4 across his last 7 appearances, where he’s netted 6 goals.

Arsenal’s first fixture comes at home to a West Ham side that have shipped 9 goals in the last 4 matches; only equalled by Southampton.

Just 6 teams have conceded more big chances than the Hammers (9) in that time and they’ve allowed opponents the most shots from inside the box (50).

Although Man City have kept 3 clean sheets in their last 4 matches, each of those came in games where Laporte (now injured) had started.

They’ve kept just 2 clean sheets in the previous 14 games without the centre-back.

It’s now a DOUBLE Gameweek, which makes this decision even more important…

Who will be YOUR Gameweek 2️⃣9️⃣ #FPL captain?

You need to pick what YOU think will be the highest scoring fantasy football lineup – without having to worry about how the team would perform next week as once Gameweek 29 is over, your team either wins, or loses.

To get involved, please click the FanTeam banner below and register for your free account – head over to the Lobby and there you will see the Gameweek 29  €50,000 guaranteed prize-pool in all its glory.

Oh – and if you register using our link here or via the banner below, you will automatically get a free €2 entry to their €6500 Gameweek 29 prize-pool contest too!