The Premier League returns with an exciting Double Gameweek, but which Manchester City or Arsenal star are you likely to award the captains armband?

Welcome back to the ‘FPL Captaincy Picks’ series, where we’ll be discussing the top 3 Fantasy Premier League captain options for the Gameweek ahead, as voted for by the FPL community over on our Gameweek 30+ Twitter Captains Poll.

With just a couple more days until the return of the Premier League, it’s time to take a look at that all-important captaincy decision for Double Gameweek 30+.

Here are the top 3 options as voted for by you, the FPL community, over on Twitter:

As always, we have provided you with a video version of this article above, for those of you who prefer to sit back and listen.

Either way, we hope you enjoy our Double Gameweek 30+ episode of FPL Captaincy Picks and Tips by FFPundits and FPLTips and as always Fantasy Premier League bosses, may your arrows be green!

Please note that all player prices, ownership percentages and online sports betting odds, which are provided by Betway88, were correct at the time of publishing. 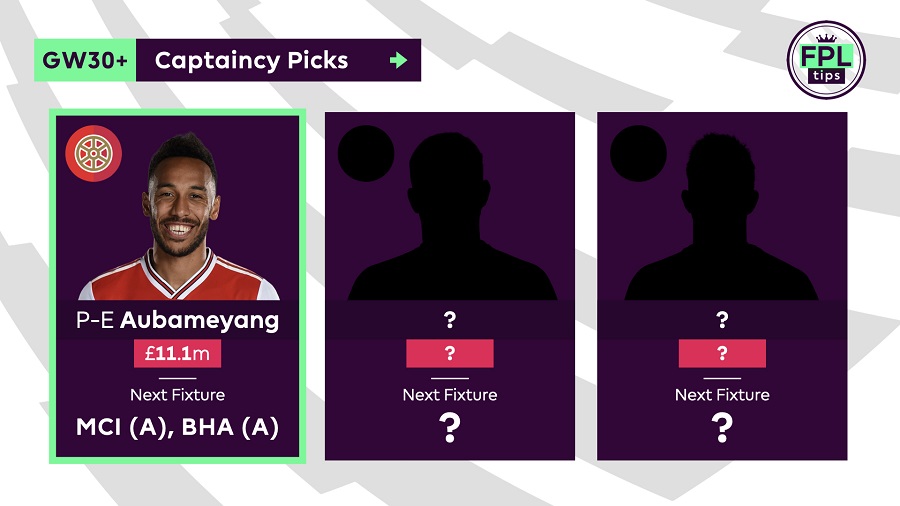 Arsenal’s Pierre-Emerick Aubameyang has received just over 7% of the vote, ahead of away fixtures against Man City and Brighton.

The 30-year-old has played a hand in 20 goals this season (17 goals, 3 assists), with 6 of those coming in 8 league matches since Gameweek 19, when Mikel Arteta first took charge.

Agüero (7) and Calvert-Lewin (8) are the only FPL forwards with more goals during that period (GW19-29).

According to Betway88, he is yet to score against Man City, from 4 appearances and has averaged 4.8 points per game during matches against the current ‘top 5’ teams.

But the Gabon international has netted 3 times in 4 outings against Brighton, who Arsenal face in their 2nd fixture of the Gameweek.

In 5 away matches against the ‘bottom 8’ sides this season, he’s averaged an impressive 10.2 points per game.

The Seagulls have shipped 15 goals in 8 games against the traditional ‘big six’ this season. 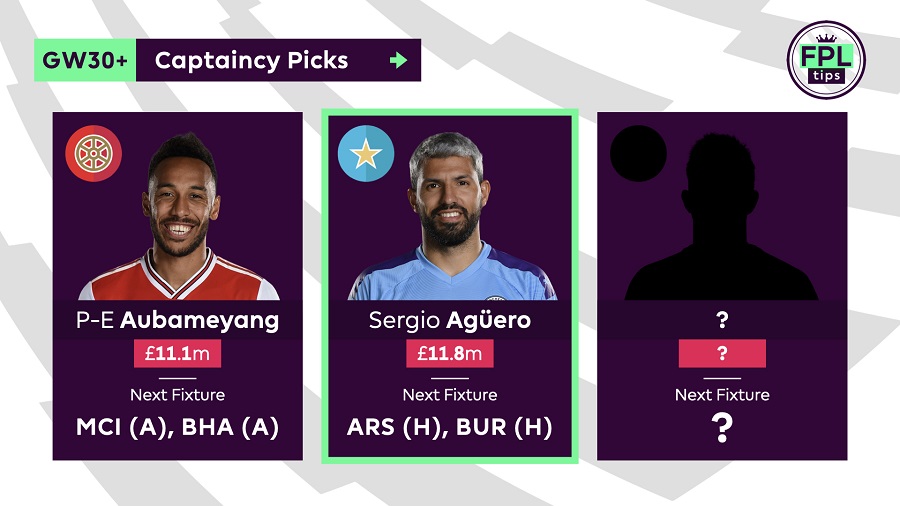 Sergio Agüero sits 2nd in the poll, earning around 37% of the vote ahead of visits from Arsenal and Burnley in Gameweek 30+.

The Argentine has largely been Guardiola’s preferred striker at the Etihad this season, featuring in 11 of 13 home matches and starting on 9 of those occasions.

He’s notched 8 goals and 2 FPL assists across those games, while ranking top amongst teammates with 35 shots in the box and an expected goals figure (xG) of 6.8.

An average of 7.97 points per 90 minutes also ranks Agüero top amongst teammates and highlights his key involvement when on the pitch.

Against Burnley, the 32-year-old has 6 goals in 7 appearances; scoring in all but one of his last 6 meetings with the Clarets and according to the odds at Betway88, is the Anytime Scorer favourite in this match. 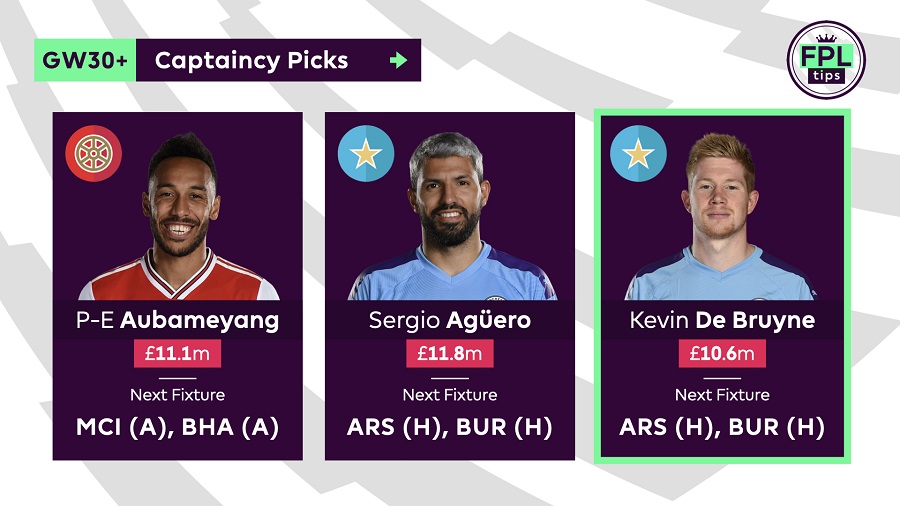 With over 51% of the vote, Kevin De Bruyne has a comfortable lead at the top of the Gameweek 30+ captaincy poll.

No teammate has been handed as many minutes at the Etihad this season (1033), where he’s amassed 5 goals and 9 FPL assists in 12 appearances to average 7.8 points per game.

Totals of 57 attempted assists and 13 big chances created during home matches rank the Belgian top amongst all players, while only Mané (109) and Salah (124) have returned more than his 93 FPL points.

Whilst Arsenal appear to have improved defensively under Arteta, their record against the current ‘top 4’ teams this season is far from great.

They’ve conceded 13 goals in 5 matches against those sides; an average of 2.6 per game.

Burnley, meanwhile, have shipped 17 goals in their 6 matches against the current ‘top 4’ this season; an average of 2.8 per game.

After a lengthy break, it’s time once again for us to ask YOU that all important question…

Who will be your FPL captain for DOUBLE Gameweek 3⃣0⃣+?

BEFORE YOU GO…. There’s a massive €100,000 Fantasy Premier League contest taking part this Saturday, on Fanteam.com.

From Saturday’s 4 Premier League fixtures only, pick what you think will be the highest scoring 7-man lineup and win your share of 100K!

See our latest article here if interested in learning more about it – or, click the banner below to register and get involved.