Welcome back to the ‘FPL Captaincy Picks’ series, where we’ll be discussing the top 3 Fantasy Premier League captain options for the Gameweek ahead, as voted for by the FPL community over on our Gameweek 26 Twitter Captains Poll 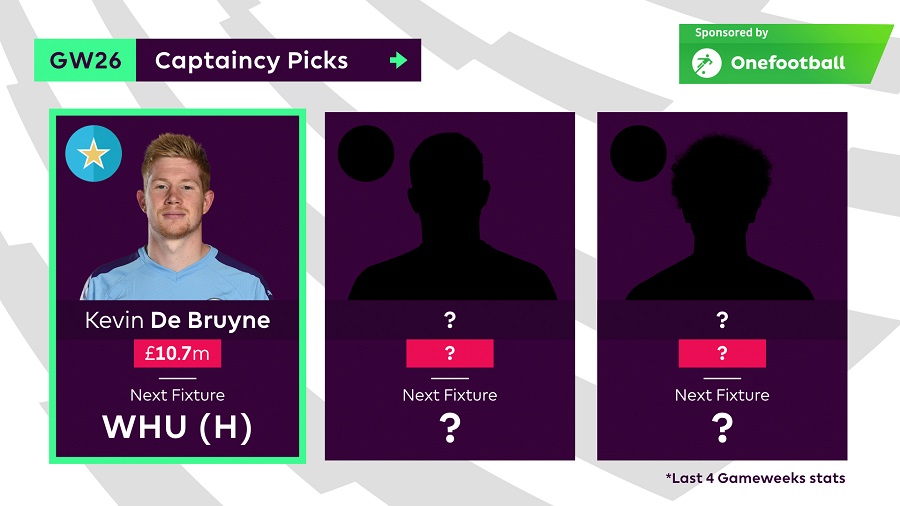 Over 12% of voters have selected Kevin De Bruyne for captaincy, putting the play-maker in 3rd place.

He’s played a hand in 5 goals over the last 6 Gameweeks, scoring once and earning 4 assists, to average 6.0 points per game.

Salah is the only midfielder able to better his 17 goal attempts during that period and the pair rank joint-2nd with 18 attempted assists, only behind Maddison (20).

Against the current ‘bottom 12’ teams, the Belgian has returned an average of 7.2 points per game this season and that falls very slightly to 7.0 when only considering home matches.

Man City have scored 9 goals over the last 4 matches, with only Liverpool (10) faring better. 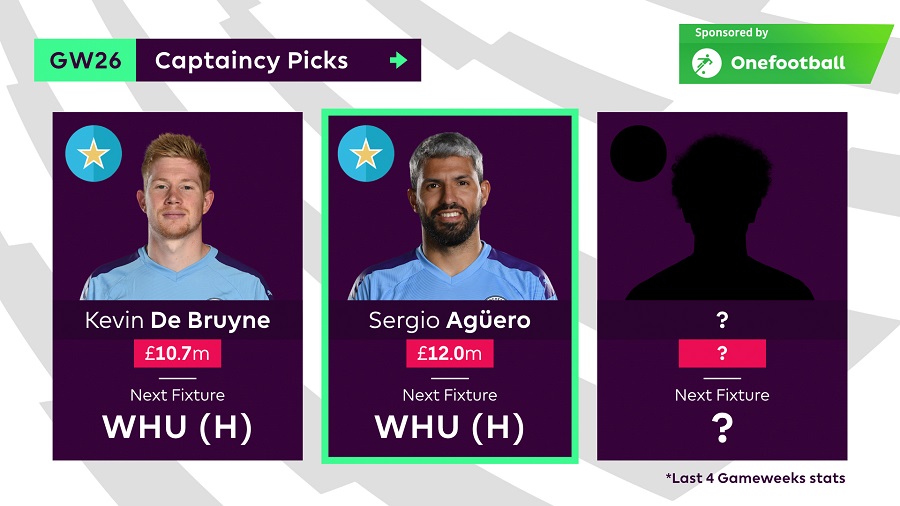 Sergio Agüero has received 25% of the vote, placing him 2nd in the poll.

With 6 goals in the last 4 Gameweeks, no forward has earned more FPL points than the Argentine (39).

He’s been afforded a league-best total of 7 big chances in that time and also ranks top for shots on target (11) and joint-top for shots in the box (16).

Against the current ‘bottom 12’ teams, Agüero has returned an average of 9.3 points per game this season and that falls slightly to 9.0 when only considering matches played at the Etihad.

West Ham have conceded the most goals (11) and big chances (18) of any side during the last 4 Gameweeks. 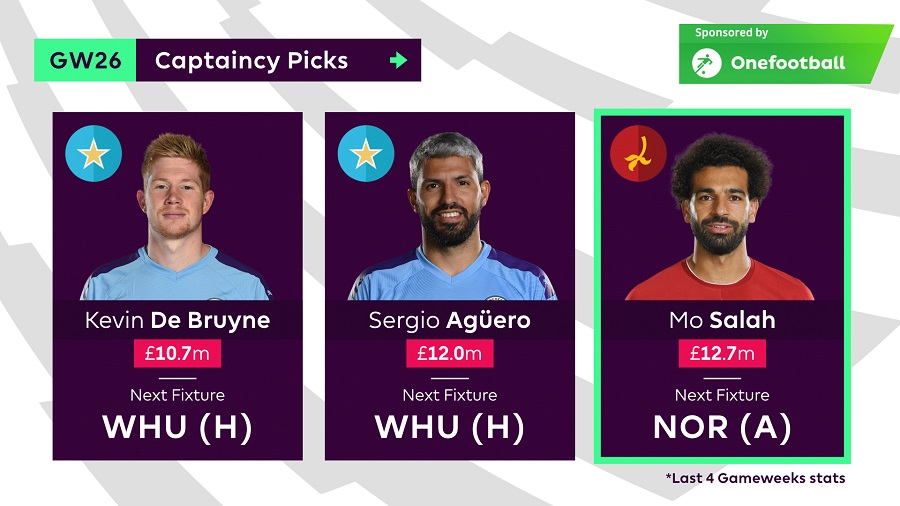 After his brace against Southampton, Mo Salah tops the poll with 56% of the vote.

He’s been directly involved in 7 goals (5 goals, 2 assists) over the last 6 Gameweeks, earning 8.3 points per game.

Only Agüero (8) has been afforded more than his 7 big chances in that time, while no player can better his 22 shots in the box.

A total of 18 attempted assists by the Egyptian is behind only Maddison (20), while no player has created more big chances than his 7.

Against the current ‘bottom 12’ teams, Salah has returned an average of 9.9 points per game this season, though that falls to 7.6 when only considering away matches.

Norwich have shipped 9 goals in the last 6 Gameweeks, with only Bournemouth (12), West Ham (13) and Aston Villa (14) faring worse.

They’ve conceded 25 goals in 10 matches against the current ‘top 8’ teams.

Who will be YOUR Gameweek 2️⃣6️⃣ #FPL captain?

[reply below if you plan to captain a player not listed]