Having not featured in Gameweek 29, Manchester City’s Kevin de Bruyne still features in the Top 3 most popular captain choices for Gameweek 30.

Welcome back to the ‘FPL Captaincy Picks’ series, where we’ll be discussing the top 3 Fantasy Premier League captain options for the Gameweek ahead, as voted for by the FPL community over on our Gameweek 30 Twitter Captains Poll.

After Gameweek 29 was unfortunately cut short with the news of Man City vs. Arsenal being postponed, we move swiftly on to selecting a captain for Gameweek 30.

Either way, we hope you enjoy our Gameweek 29 episode of FPL Captaincy Picks and Tips by FFPundits and FPLTips and as always Fantasy Premier League bosses, for those betting in UK games this week, the very best of luck to you.

Here’s a look through the top 3 captain options, as voted for by you, the FPL community, over on Twitter: 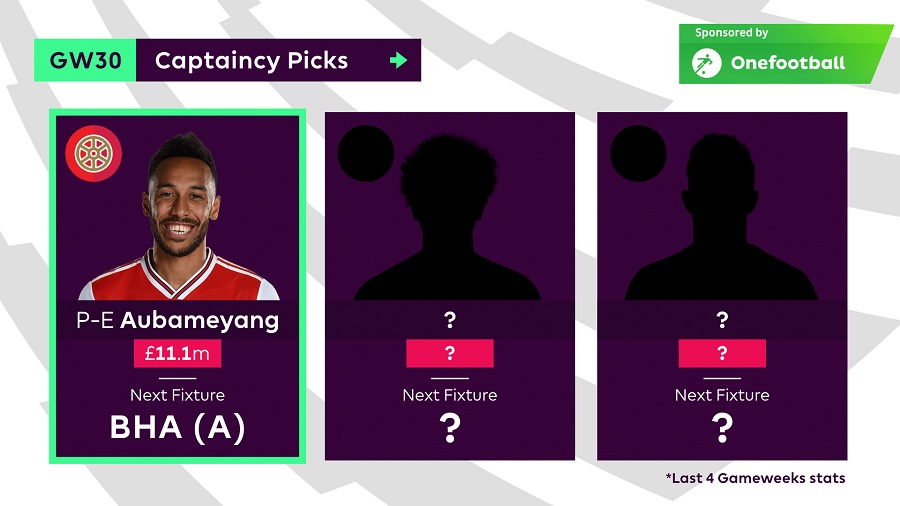 There’s nothing to separate the two players behind the top pick this week, so in joint-2nd place, it’s Pierre-Emerick Aubameyang, with 24% of the vote.

The Arsenal forward was unusually quiet in front of goal against West Ham last weekend but was unfortunate not to earn an assist for the big chance he created for Sokratis.

He’s scored 3 goals in 3 matches over the last 4 Gameweeks, where he’s averaged 7.7 points per game.

The 30-year-old has 9 goals and 2 assists in 12 away matches this season, averaging 6.4 points per game on the road and this increases to 11.3 when only considering matches played against the ‘bottom 6’ teams.

Only Vardy (15) and Sterling (20) have been afforded more than his 12 big chances away from home.

Brighton have only shipped 3 goals in the last 4 Gameweeks but only 5 teams have allowed opponents more than their 8 big chances. 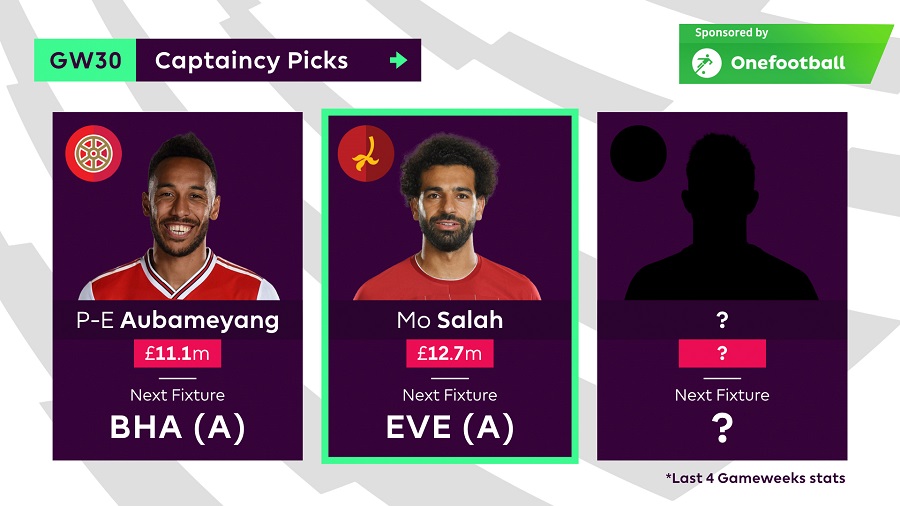 Also in joint-2nd place is Mohamed Salah, sharing 24% of the vote ahead of the Merseyside derby.

With 5 goals and 1 assist over the last 6 Gameweeks, the Egyptian has averaged 7.6 points per game.

The Liverpool midfielder has directly contributed to 7 goals in 12 away matches this season (2 goals, 5 assists), averaging 5.2 points per game on the road.

This increases, slightly, to 6.1, when excluding matches played against the ‘top 8’ teams but is still far from the 8.9 points per game he averages at Anfield.

Following the 4-0 defeat to Chelsea in Gameweek 29, Everton have shipped 9 goals in the last 4 matches, with only Aston Villa (11) faring worse.

They rank joint-9th with 7 big chances conceded in that time. 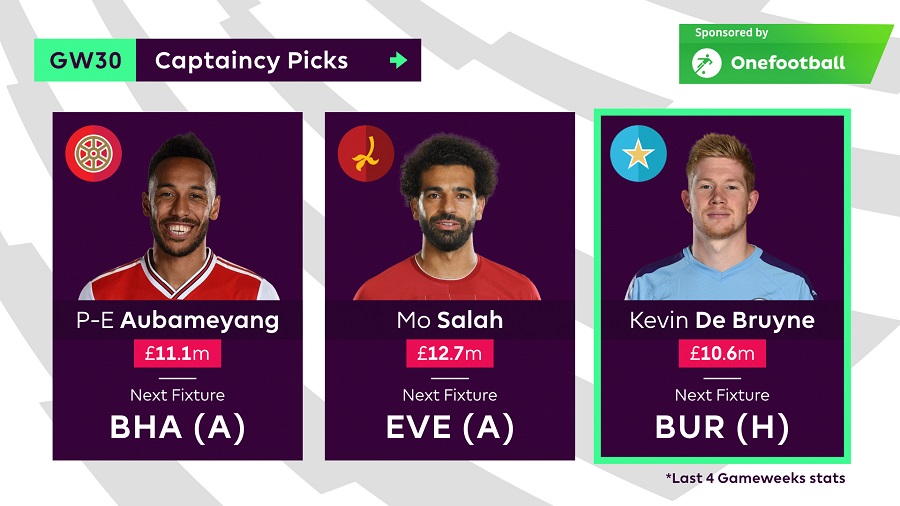 With almost 38% of the vote as it stands, Kevin De Bruyne leads the captaincy poll for Gameweek 30.

Pep Guardiola has hinted at a return for the Belgian against Burnley, in order for him to “get the rhythm of the team” ahead of their Champions League 2nd leg tie with Real Madrid.

He was a big miss during the defeat to Man Utd in Gameweek 29, as evidenced by the 5 goal involvements he’s amassed in his last 6 matches (1 goal, 4 assists), between Gameweeks 22 and 27.

The 28-year-old has 5 goals and 9 assists across 12 appearances at the Etihad this season, averaging 7.8 points per game.

This increases to 9.0 points per game when excluding matches played against the current ‘top 6’ teams.

Burnley have conceded 10 goals in their 4 away matches against the ‘big six’ this season, an average of 2.5 per game.

As we head in to the final two months of the season, the captaincy decision is becoming more and more vital.

So, with that said…

Who are YOU trusting with the captains armband for Gameweek 3⃣0⃣?