Welcome back to the ‘FPL Captaincy Picks’ series, where we’ll be discussing the top 3 Fantasy Premier League captain options for the Gameweek ahead, as voted for by the FPL community over on our Gameweek 13 Twitter Captains Poll.

Either way, we hope you enjoy our Gameweek 13 episode of FPL Captaincy Picks and Tips by FFPundits and FPLTips and as always Fantasy Premier League bosses – may your arrows be green! 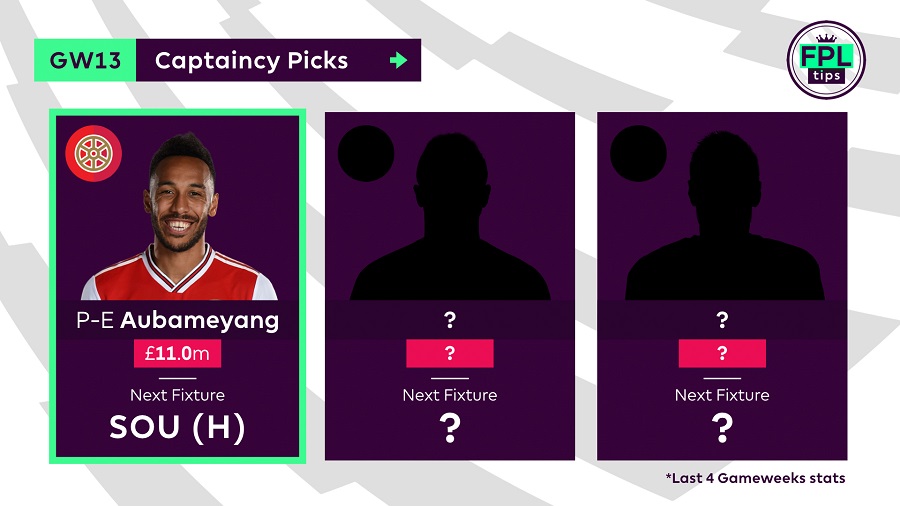 Aubameyang has received around 16% of the vote, placing him 3rd in the poll.

He was unable to extend his tally of 8 goals for the season when the Gunners travelled to Leicester last Gameweek, seeing a goal correctly ruled offside during the 2-0 defeat.

The Arsenal forward has netted 4 goals in 6 home matches this season, averaging 5.3 points per game at the Emirates.

He was afforded 5 of his team’s 10 big chances during those games and fired 8 efforts on target to rank joint-5th amongst forwards, only behind Rashford, Vardy (each 9), Abraham (10) and Pukki (11).

Only Leicester (14), Liverpool (17) and Man City (19) have scored more than Arsenal’s 11 goals during home matches this season.

Southampton rank bottom with totals of 20 goals conceded and 23 big chances conceded, in the last 6 Gameweeks, following the heavy 9-0 defeat at the hands of Leicester back in Gameweek 10. 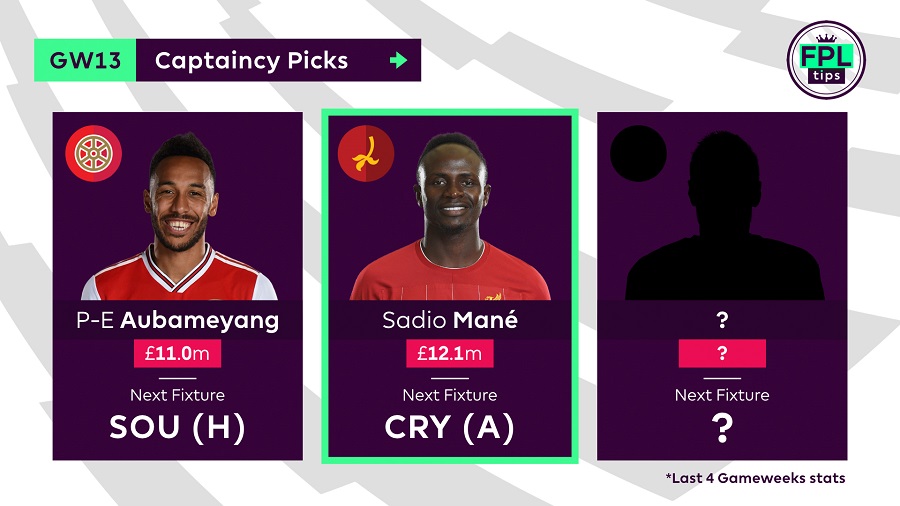 Sadio Mané currently sits in 2nd place, receiving around 20% of the vote.

The 27-year-old has come up with some important goal contributions in the last 5 Gameweeks, producing 3 goals and 3 assists over that spell.

No side have conceded more headed goal attempts (19) than Crystal Palace during that period, while no player has taken more attempts of that nature than Mané (12) this season.

He’s amassed 3 goals and 2 assists in 6 away matches this season, returning an average of 6.7 points per game on the road.

Only Sterling (10) has been afforded more than his 6 big chances away from home.

The Eagles have shipped 8 goals in the last 4 Gameweeks, with Southampton (17) the only side to concede more than their 15 big chances.

Only Leicester (17) and Man City (26) have fashioned more big chances than Liverpool (16) during away matches. 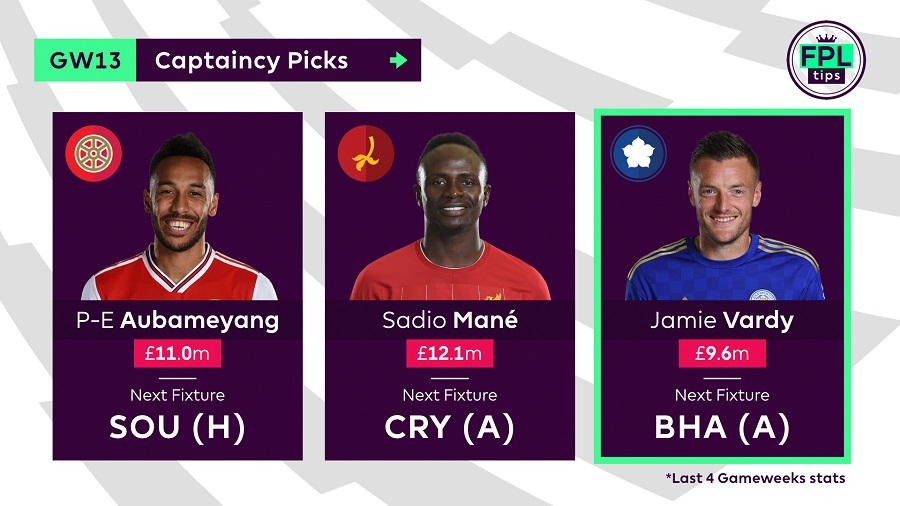 With 54% of the vote, Jamie Vardy tops the captaincy poll once again for Gameweek 13.

The in-form forward has netted in each of the last 4 Gameweeks, amassing 6 goals and 2 assists.

No forward has fired more than his 9 shots on target during that spell, while only Pulisic (11) can better that tally across all positions.

Abraham, Rashford (each 6) and Wood (7) are the only players to better Vardy’s 5 big chances.

The Foxes rank 1st in the league with totals of 15 goals scored and 30 shots on target, during the same period.

Brighton rank 6th worst in the league, in that time, with a total of 7 goals conceded, while only 5 teams have afforded opponents more big chances (11).

The Seagulls look set to be without both of their first-choice centre-backs, with Webster suffering from an ankle injury and Dunk missing through suspension.

Who are YOU trusting with the armband for Gameweek 13?

Once you’ve downloaded the app, head on over to the ‘Mini-League‘ tab and there you’ll see ‘FPLTips‘ free entry league for ‘Saturday November 23rd’ – it’s that simple.