Is Liverpool’s Mo Salah still your main man for Gameweek 2 trip to Southampton?

Welcome back to the ‘FPL Captaincy Picks’ series, where we’ll be discussing the top 3 captain options for the Gameweek ahead, as voted for by the FPL community over on our Twitter Captains Poll.

As always, we have provided you with a video version of this article, for those of you who prefer to sit back and listen – either way, we hope you enjoy our Gameweek 2 episode of FPL Captaincy Pick and tips by FFPundits and FPLTips.

Please note that all player prices and ownership percentages were correct at the time of writing and publishing. 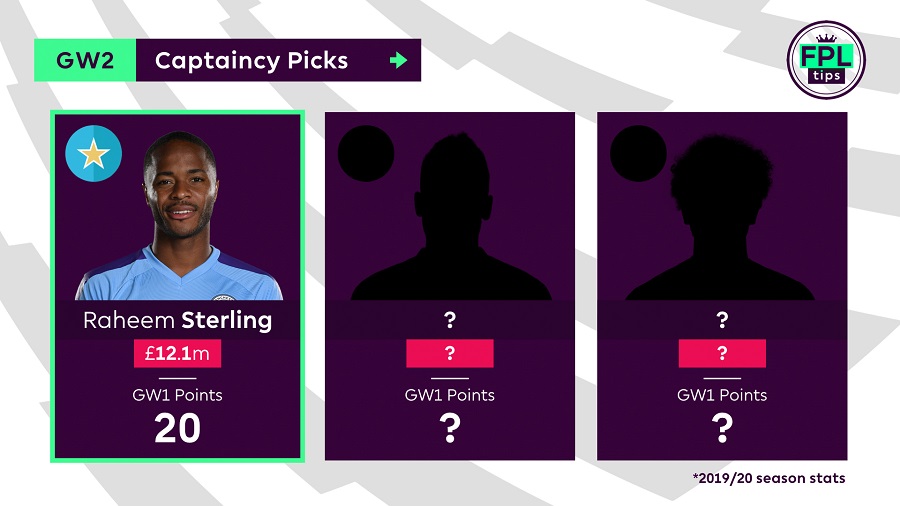 With around 9% of the vote, Raheem Sterling comes in at number 3, just as he did in Gameweek 1.

The England international bagged a hat-trick in a 5-0 win over West Ham and no FPL player had more big chances (3) or fired more efforts on target (4) during the opening weekend.

But can Man City find just as much joy against Spurs this Saturday?

The champions scored 20 goals in 10 matches against the ‘top six’ last season, averaging 2 goals per game.

Sterling returned an overall average of 6.9 points per game last season but this actually increased to 7.4 PPG during home matches against the ‘top six’.

Aubameyang sits in 2nd place, receiving around 14% of the vote.

The Arsenal forward found the breakthrough goal against Newcastle, firing a total of 4 shots from inside the box; only Kane managed more in Gameweek 1.

He ended last season as the top scoring FPL forward, producing an average of 5.7 points per game, which increased to 6.3 PPG during home matches.

Only Agüero (15) and Mané (18) netted more than his 13 goals on home turf, while his total of 18 big chances ranked joint 2nd in the league; level with Vardy and only behind Agüero (19).

Gameweek 2 sees Burnley travel to the Emirates, a side that shipped 68 goals on the road last season; only Bournemouth (70) and the 3 relegated sides conceded more. 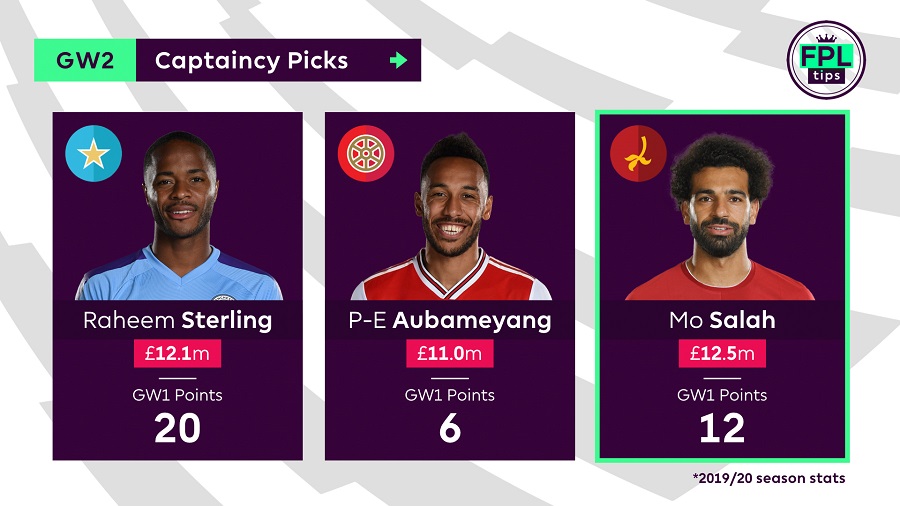 With a huge 74% of the vote, as things stand, Mo Salah comfortably tops the captaincy poll for a second week running.

2 shots inside the box and 3 attempted assists led to the Egyptian reaching double-figures against Norwich on opening day.

He returned an average of 5.9 points per game on the road last season, which was only bettered by Wilson and Kane (each 6.4) amongst players who featured regularly.

This increased to 8.2 PPG during away matches against teams who finished in the bottom half of the table.

Southampton host the Reds in Gameweek 2, following their 3-0 defeat to Burnley on opening weekend.

They conceded 30 goals during home matches last season, with only Burnley (32) and the 3 relegated sides shipping more.

Premium players delivered healthy returns in GW1, but which of these hot-shots will be your Gameweek 2 Captain… 👇