Welcome back to the ‘FPL Captaincy Picks’ series, where we’ll be discussing the top 3 Fantasy Premier League captain options for the Gameweek ahead, as voted for by the FPL community over on our Twitter Captains Poll.

Either way, we hope you enjoy our Gameweek 5 episode of FPL Captaincy Picks and Tips by FFPundits and FPLTips. 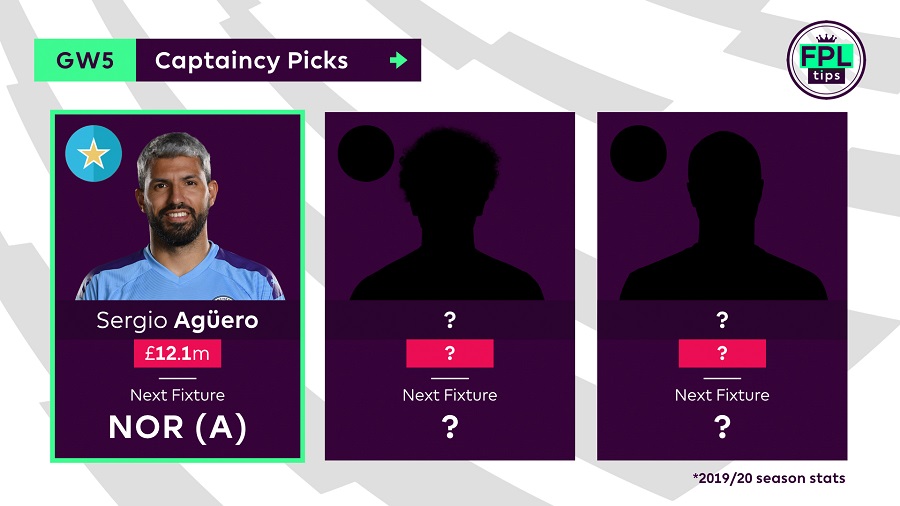 The Argentine has bagged 4 goals and 1 assist in the last 2 Gameweeks, earning 90 minutes on each outing in the absence of Gabriel Jesus.

The Brazilian is now back in training, however, so could provide some competition for gametime.

Unlike Sterling, Agüero has the advantage of being well-rested over the international break, though he is set to feature in a testimonial match for Vincent Kompany midweek.

He averaged 4.2 points per game in away matches last season but this increased significantly to 6.5 PPG against teams who finished in the bottom 8.

Norwich have shipped 10 goals this season; more than any other side and they rank joint-worst with a total of 46 shots inside the box conceded, level with Spurs and Aston Villa. 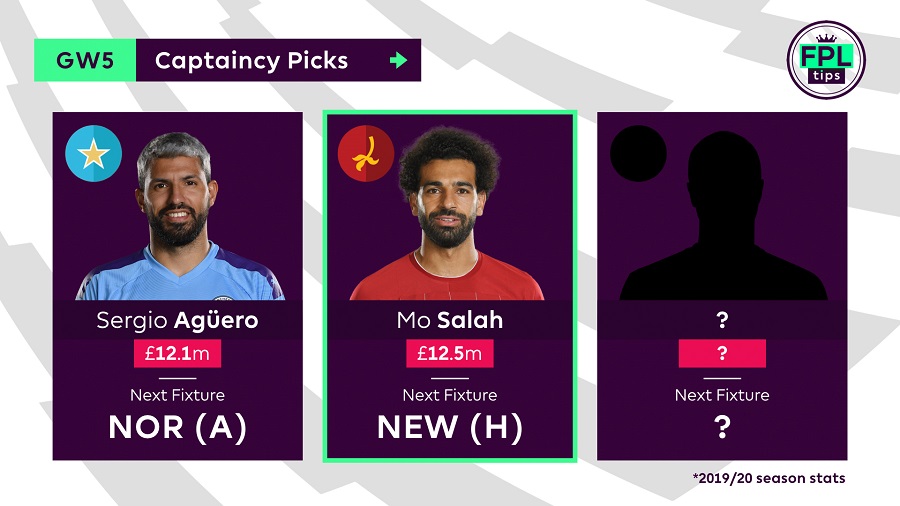 It’s very close at the top of the poll this week but with 36% of the vote, Mo Salah is currently in 2nd place.

The Egyptian has been directly involved in 5 league goals this season (3 goals, 2 assists) after recording an assist in the 3-0 win over Burnley before the break.

As with Agüero, Salah should be well-rested ahead of Gameweek 5, given that he hasn’t featured for his country.

The 27-year-old averaged 7.7 points per game at Anfield last season and this increased to 8.4 PPG against teams who finished outside the ‘top six’.

Newcastle have conceded 5 goals this season, half the amount that Norwich have shipped and proved stubborn in their away win over Spurs in Gameweek 3.

But Liverpool have won their last 3 meetings against the side, netting 9 goals across those games. 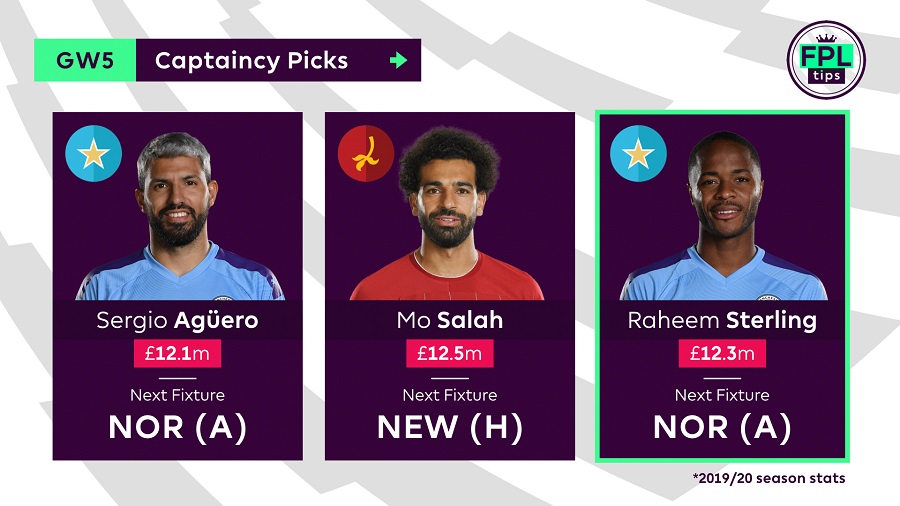 With 38% of the vote, Raheem Sterling just edges 1st place.

The international break saw his impressive start to the season continue, with 2 goals and 4 assists in 2 matches for England.

The 24-year-old has been afforded 6 big chances in the opening 4 Gameweeks, ranking joint-1st with Salah, while only Pukki (13) has fired more than his 12 shots inside the box.

Sterling averaged 5.3 points per game in away matches last season and this increased slightly, to 5.5 PPG, against teams outside the ‘top six’.

One small concern is that Man City travel to Shakhtar Donetsk on Wednesday night to begin their Champions League campaign – could we see Sterling’s minutes managed to some degree, after he featured twice from the start for England over the break?

It’s time for us to ask YOU the most important question you’ll have to answer this week.