Welcome back to the ‘FPL Captaincy Picks’ series, where we’ll be discussing the top 3 Fantasy Premier League captain options for the Gameweek ahead, as voted for by the FPL community over on our Gameweek 8 Twitter Captains Poll.

Either way, we hope you enjoy our Gameweek 8 episode of FPL Captaincy Picks and Tips by FFPundits and FPLTips and as always Fantasy Premier League bosses – may your arrows be green! 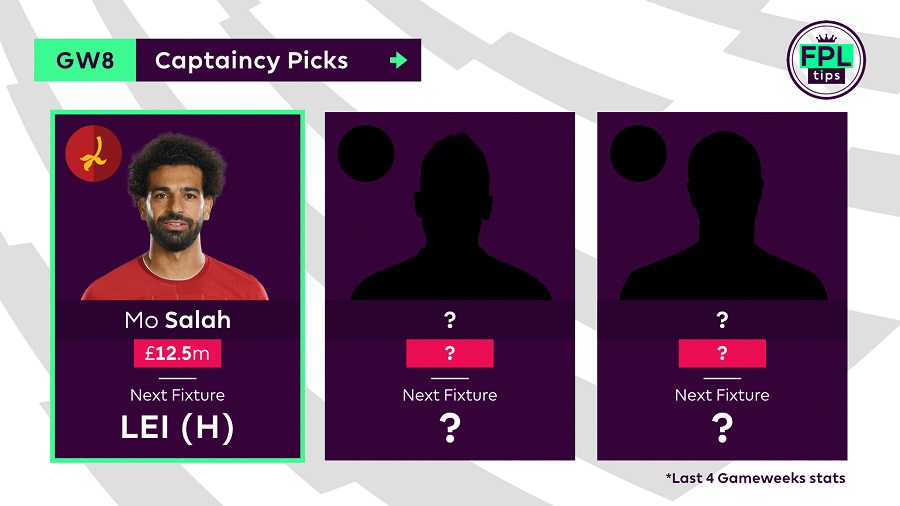 Mo Salah moves down to 3nd place in the poll, receiving around 11% of the vote.

It’s worth noting that 13% of voters selected “other”, with lots of mentions for Agüero and Pukki amongst the replies on Twitter.

The Egyptian was back amongst the goals in the Champions League to continue his impressive home form, and is a now firm First Goalscorer and Anytime Scorer favourite on the 888 Sport betting site.

He’s scored in each of the 3 league matches at Anfield so far this season, amassing 4 goals and 1 assist and returning an average of 12.0 points per game.

Only Callum Wilson (7) and Abraham (8) have been afforded more than his 5 big chances during home matches.

Leicester rank joint-2nd best for big chances conceded away from home (3) and only Man Utd have faced fewer shots inside the box (13 to 17).

They’ve shipped just 3 goals across 3 away matches but are yet to keep a clean sheet on the road. 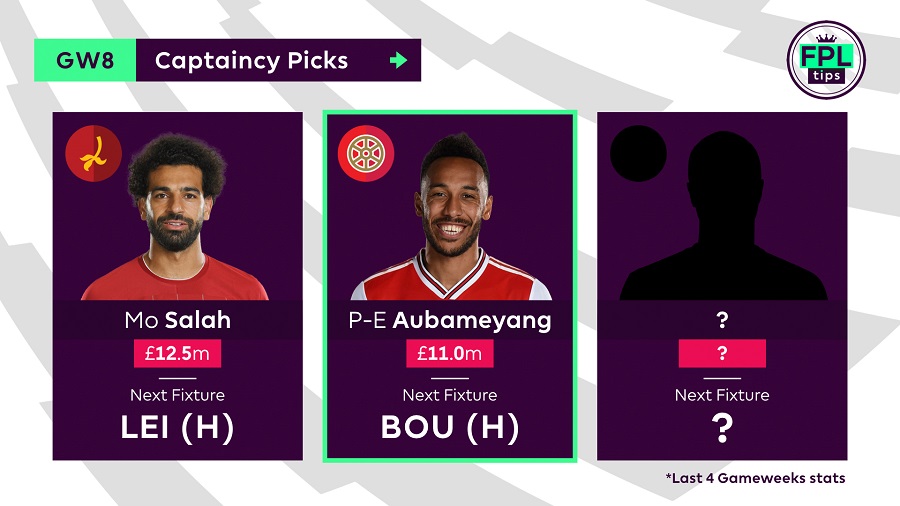 Aubameyang has received a huge 32% of the vote, placing him 2nd in the poll.

Arsenal’s 1-1 draw with Man Utd saw him net his 7th goal of the season and continue the run of returning points in every Gameweek so far.

The 30-year-old has provided 20 FPL involvements in 23 league matches this calendar year, with a tally of 16 goals and 4 assists.

He trails only Agüero (8) for goals scored this season, while only Abraham (12) and Pukki (15) have fired more than his 10 shots on target, amongst FPL forwards.

The Gunners have faced Burnley, Spurs and Aston Villa at the Emirates so far, with Aubameyang scoring in each match to return an average of 6.7 points per game, at home.

Only West Ham and Watford (each 23) have conceded more big chances than the Cherries (20). 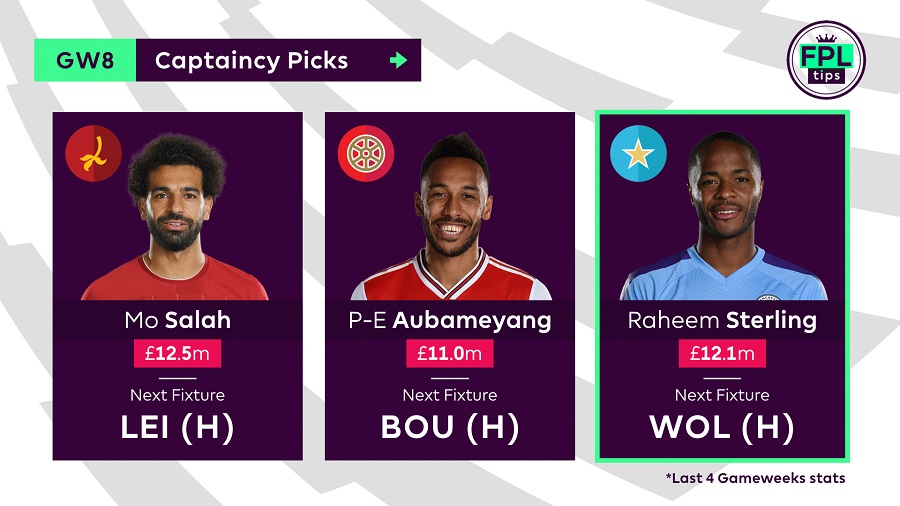 With 45% of the vote, Raheem Sterling makes a return to the top of the captaincy poll.

The England international has scored in each of his last 3 appearances in all competitions, since being given a rest during the 8-0 win over Watford in Gameweek 6.

No FPL midfielder has scored more than his 6 goals this season, while only Abraham, Aubameyang (each 7) and Agüero (8) have bettered that total across all positions.

An average of 3.3 shots inside the box per game ranks Sterling 1st amongst all players, while only Agüero (1.57) has been afforded more than his 1.5 big chances per game.

Wolves have struggled with the demands of the Europa League so far and have shipped 9 goals in the last 4 Gameweeks; only Everton (10) and Watford (13) have fared worse.

Gameweek 8 could be the most important captaincy decision yet. Alot of big players have nice fixtures this week.

Who are YOU trusting with the armband?