Hello, my name is Kieran (@FPLRatchet), and these are my recommendations for five of the most interesting-looking Player Matchups for Gameweek 3 on FanTeam.

Since creating my FanTeam account a few months ago, my main focus and aim was to enter their €1,000,000 season-long FPL game and earn some good money from it, but then I saw their Player Matchups game and was instantly intrigued by it.

So much so, I have decided to write a weekly article for FanTeam and the Fantasy Football Pundits, to give my Top 5 Player Matchups to bet on, each and every FPL Gameweek.

Player Matchups is a game recently added to FanTeam’s portfolio of fantasy sports products and has been a popular hit with both new and existing customers since the return of Premier League action in September.

This new and exciting game enables users to bet on between three, and ten, designated 1-vs-1 fantasy matchups, with the potential to win up to 500x your stake.

Player Matchups acts as a fantasy football accumulator, with your potential payout increasing the more matches you bet on – just like a regular team-accumulator bet with a bookmaker.

The beauty of Players Matchups is that you play against the House (FanTeam), and not 100’s or 1000’s of rivals in a fantasy football contest – this allows you to pick the players you think will win their head-to-head matchup, without the worry of what other entrants might do.

Aside from the potential for huge cash rewards, the reason I like Matchups so much is that it’s a simple way for me to apply my own knowledge of fantasy football, without the need to build or manage a fantasy team.

The simplicity of Matchups means that not only can I choose my bet in just a couple of minutes – where building the perfect fantasy team could take me hours (on a good day), but it allows me to make my decisions based purely on my own judgement on the outcomes of fixtures and player performances.

Matchups strips away the complexities involved in managing a fantasy team such as planning transfers weeks in advance, managing team value by predicting price changes, etc, so all that matters is your own assessment of how the games that week are going to turn out.

For example, if you predicted Everton would demolish West Brom last week, you could have gone all-in on their players and won 4 or 5 Matchups just by correctly predicting how that one match would end!

My first choice for this week’s Matchups is Bruno Fernandes (MUN).

Whilst it is difficult betting against any team playing West Brom currently (sorry Baggies fans), Kai Havertz looks like he hasn’t quite adjusted to the speed of the Premier League as quickly as some of the League’s other new additions such as James Rodríguez.

Whilst he did show some more promising touches against Liverpool, to me he looked more useful as part of the build-up play than an actual threat in front of goal.

The stats back up this observation, too, as Havertz is still yet to take a shot in the Premier League, and has only amassed and xA of 0.15 in his first two league games.

Bruno, on the other hand, proved himself in the second half of last season to be a fantasy gem, and being the player on the left of the Matchup with the yellow star to his name means that he wins the Matchup in the result of a points draw, increasing his appeal significantly.

With Bruno seemingly on penalties and set pieces, this looks to me like a Matchup leaning in favour of the Portuguese maestro.

UPDATE: Since writing this article, Chelsea’a Kai Havert impressed in Wednesday night’s EFL Cup game against Barnsley and netted a hat-trick. As impressive as this was, it doesn’t change my opinion on the above Premier League Player Matchup.

Perhaps surprisingly to many of you after Son’s heroic 4-goal haul last week, my next choice is Kevin De Bruyne (MCI).

Off the back of Son’s haul last week and with him being the yellow-starred player in this Matchup, I’m sure many will side with the Korean here, but please, hear me out on this one.

Newcastle have a great record against Spurs in recent times, with this same fixture last season delivering a 0-1 away victory for Newcastle, with Joelinton on the scoresheet. This is because Newcastle tend to play very deep against Spurs, a system Tottenham often struggle to break down.

These are also the types of games where Son doesn’t have much space to get in behind, so will likely be found hugging the left touchline for most of the game. T

his is in stark contrast to Southampton last week – who’s high line played right into the hands of Son’s runs in behind leading to the goals.

With a potential injury to Wilfried Ndidi, Leicester could be forced to play Wes Morgan at centre-back – who’s lack of pace is something I believe City are more than capable of exploiting.

With De Bruyne now on penalties as well as set-pieces, I believe he could do some serious damage to the Leicester side if he’s deployed in the same central number 10 role he was against Wolves on Monday.

My third choice for this week’s matchups is Harry Kane (TOT).

I know, I know, I just explained why I think Newcastle will be tough for Spurs to break down, but that was more to illustrate why I believe Son will be forced into a wide position.

Harry Kane had two well taken goals ruled out for offside against Southampton on top of his five attacking returns, and he looked back to his brilliant best for large periods of the game.

Whilst going against Mané is a risk as he’s capable of a haul against anyone, I’m backing Kane to deliver for the second week running this weekend.

Jack Grealish (AVL) is my next choice for this week’s Matchups.

With new signing Nelson Semedo only just announced by Wolves, and Ki-Jana Hoever still a prospect more than an established starter, I think the chances are high that Traore slots in at Right Wing-Back again – a position where attacking returns tend to be limited to an assist at best for the Spaniard.

Grealish, however, plays a Fulham side who have conceded 7 goals in their first two games, and though he didn’t score an attacking return against Sheffield United, he did put up some encouraging numbers with an xGA of 0.42, and two shots in the box.

My money is on him to deliver that first return of this Premier League season this weekend.

My final Matchup choice of the week is the only Matchup pair I’ve chosen where both players play for the same side. My choice is Trent Alexander-Arnold (LIV).

Whilst in my opinion Firmino’s talent and quality cannot be understated, his pedigree as a fantasy asset certainly can be.

The problem with him as a fantasy asset is that the best things he brings to this Liverpool side are often not rewarded with fantasy points – such as making a brilliant bit of movement to free up Sadio Mané, or winning the ball back high up the pitch through his intense pressing.

Alexander-Arnold, however, is the opposite to this – he is fantasy football gold. With points available through clean sheets, goals, and assists, he really is a triple-threat.

With him being the yellow-starred option in this Matchup, to me that tips the scales of this in his direction, making him my final choice for these Gameweek 3 Player Matchups.

Here’s how the screen will look once you have chosen your matchups. As you can see, the 5 players I’ve chosen are highlighted in green and you can change your entry stake if you wish, via the plus and minus button.

A €5 bet on 5 players gives you odds of 20/1, which for me, is more enjoyable then a €5 team-accumulator bet with a regular bookmaker. 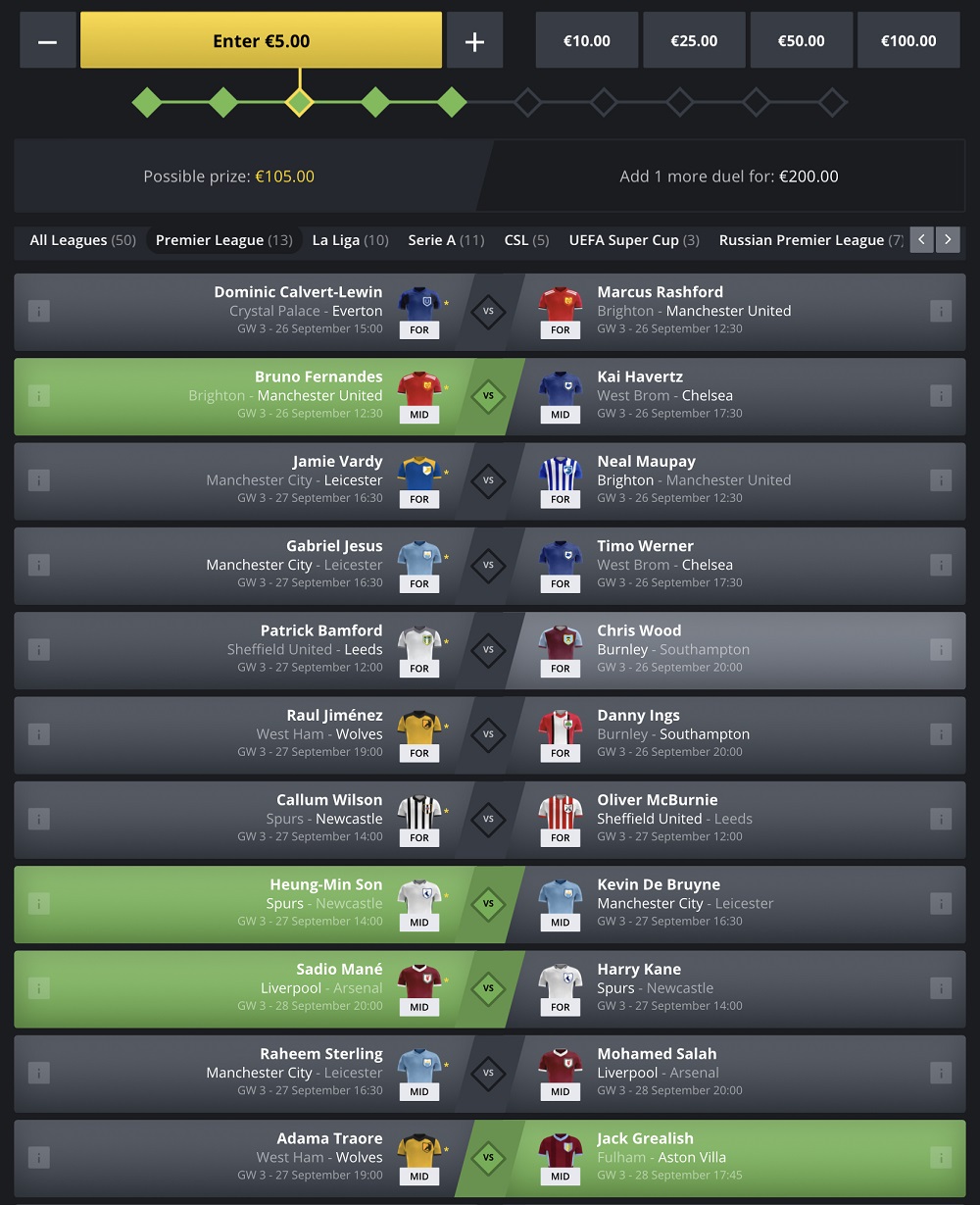 READY TO GET INVOLVED?

FanTeam continues to revolutionise the Daily Fantasy Sports betting experience, making it even more exciting to follow and play on matchdays.

If you are new to FanTeam or have yet to give the Player Matchups a try, head over to FanTeam via the banner below to get involved and check out the matchups on offer this week.