Players are usually known as Premium, Mid-Priced or Budget and with these constraints in mind, see below our Top 5 FPL MIDFIELDERS to consider for the upcoming 2021/22 season

The ‘Players to Watch’ series continues with a look at the top 5 FPL midfielders to consider for the opening weeks of the new Fantasy Premier League season.

Once again, we’ll be taking a look at the best budget, mid-price and premium options – with at least one from each of those categories included. 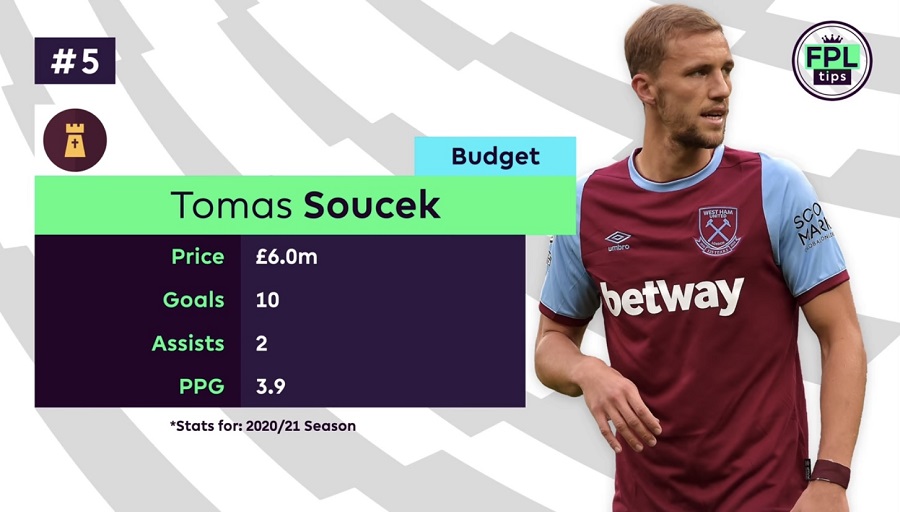 Reaching double-figures in his first full season for West Ham, Tomas Soucek finished as the club’s joint-leading goalscorer with Michail Antonio (each 10).

Amongst budget midfielders, priced at £6.0m or below, only Jack Harrison (160) and former out-of-position defender Stuart Dallas (171) exceeded his 147 FPL points.

The Czech ranked top amongst that group of players for shots in the box (52), had the fourth-most touches in the opposition’s penalty box (110) and recorded the fifth-highest number of big chances (8).

Three of West Ham’s first four opponents ranked amongst the bottom five teams for goals conceded last season, while no side conceded as many headed goal attempts as Crystal Palace (114). 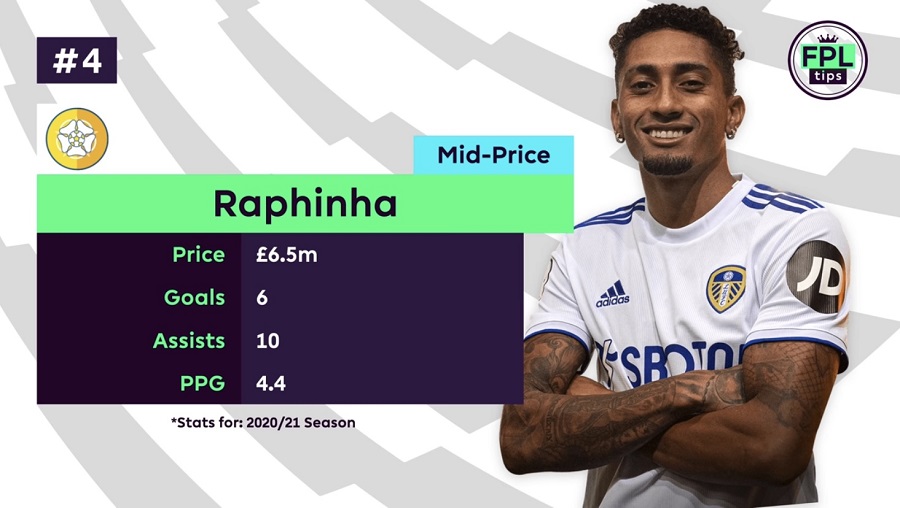 Since making his first start for Leeds in Gameweek 9 last season, Raphinha went on to average 5.1 points per 90 minutes in 27 appearances.

The Brazilian trailed only Bruno Fernandes for assists in that time (11 to 10) and ranked amongst the top three midfielders for attempted assists (64) and big chances created (12).

Tallies of 128 touches in the opposition’s box and 43 shots in the box each ranked sixth amongst midfielders.

Though Leeds have a tricky immediate start, six of their first ten fixtures have a difficulty rating of 2.

Raphinha picked up 3 assists in 7 matches against the ‘top six’ teams last season. 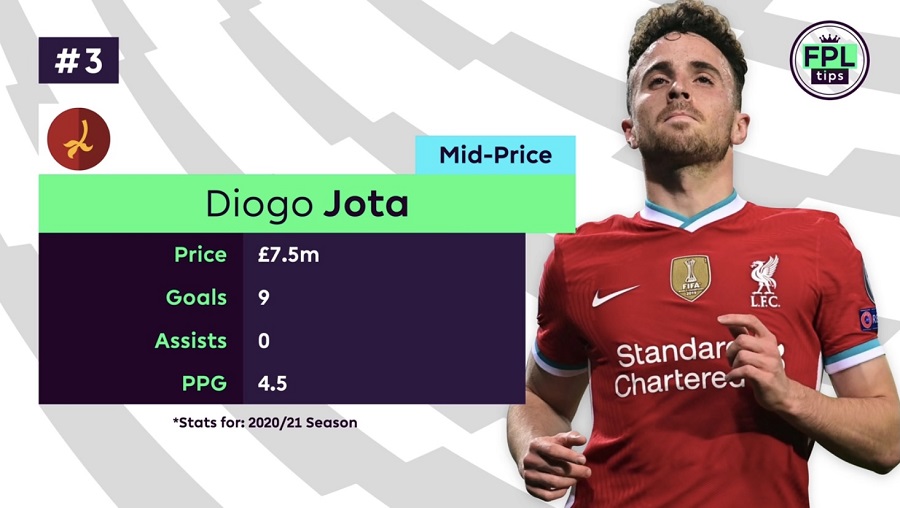 Diogo Jota made an immediate impact for Liverpool, after completing a move from Wolves in September last year, netting 5 goals in his first 9 league appearances before a knee injury disrupted his season.

Averaging 8.4 points per 90 minutes during that spell, between Gameweeks 3 and 11, the 24-year-old trailed only Son, Salah (each 6) and Fernandes (7) for goals from midfield.

After regaining fitness, Jota helped Portugal to a last-16 finish at EURO 2020 this summer and will be better placed to start the season than Roberto Firmino, who made it all the way to the Copa America final with Brazil. 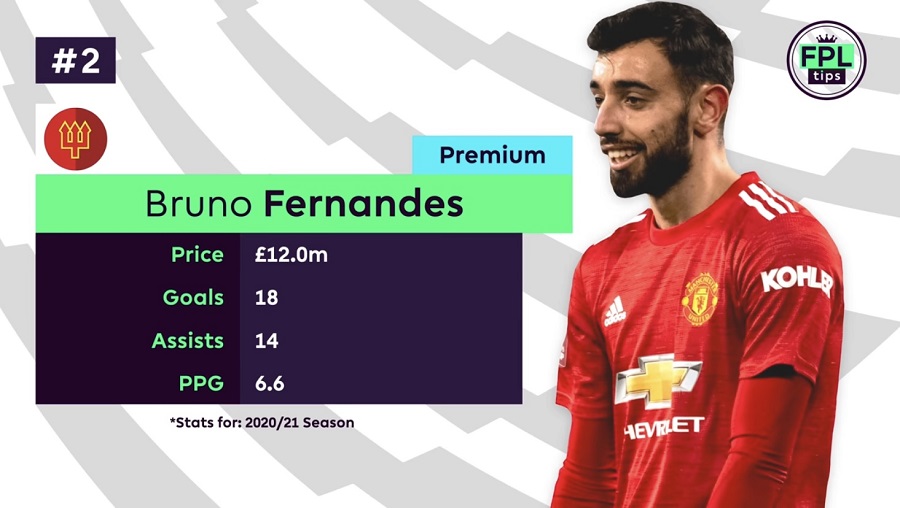 With a direct involvement in 32 goals last season (18 goals, 14 assist), Bruno Fernandes finished as the top FPL points scorer in the game.

Man Utd have added further talent to their attack for next season in the form of new signing Jadon Sancho.

They avoid the ‘big six’ in their opening fixtures, taking on Southampton, Newcastle and Aston Villa in the first 6 Gameweeks. 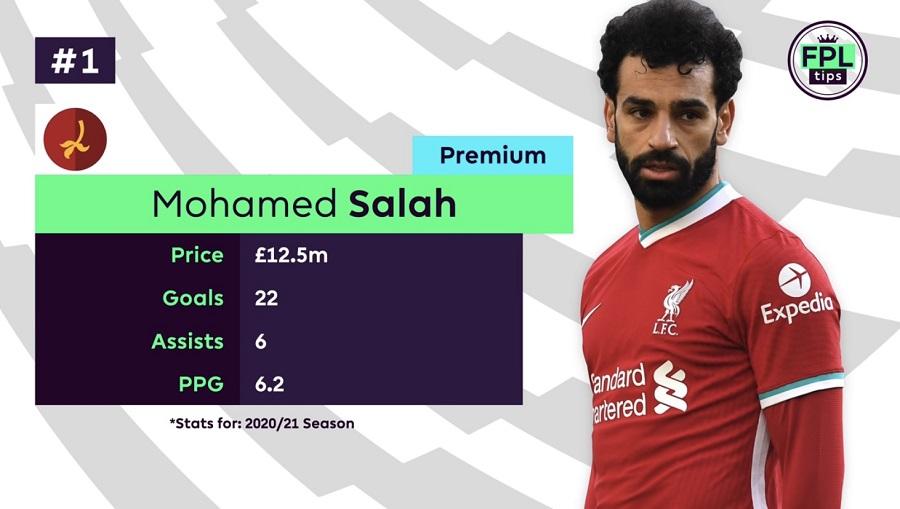 For the third time in four seasons, no FPL midfielder scored more goals than Mohamed Salah – with 22.

Unsurprisingly, the ‘Egyptian King’ dominated all underlying numbers for goal threat; taking the most shots, in total (126), from inside the box (98) and on target (52).

The 29-year-old has scored in all four of his Gameweek 1 fixtures since signing for Liverpool, averaging 2.0 goal involvements (6 goals, 2 assists) and 12.8 FPL points.

He’ll be hoping to extend that run against a newly promoted Norwich side that shipped a league-high 75 goals in their last stint in the Premier League, in the 2019/20 season.

Thank you for reading ‘Fantasy Premier League Tips: ‘TOP 5 FPL MIDFIELDERS TO OWN: Budget, Mid-Price & Premium ’ which was written and produced by FFPundits & FPLTips.