Want to manage a football team with all of  the world’s top players? Well, now you can and manage players like Messi, Ronaldo, Neymar, and Suarez, to name but a few…

FanTeam are bringing Champions League fantasy football back to our lives with a bang and offering a €250,000 guaranteed prize pool contest, which will cover the Group Stages only.

A mouth-watering €50,000 will be paid to the first-place winner and finishing in the top 1744 places will guarantee you a cash pay-out.

But be warned – there are only 15,000 seats available, so it’s advisable not to leave it too late before entering.

You will need to build a a squad of 15 players using your 100M budget, but like FPL, you can select a maximum of 3 players from any one team.

Unlike their season-long Premier League game, however, there are no wildcards and no price changes in this tournament. 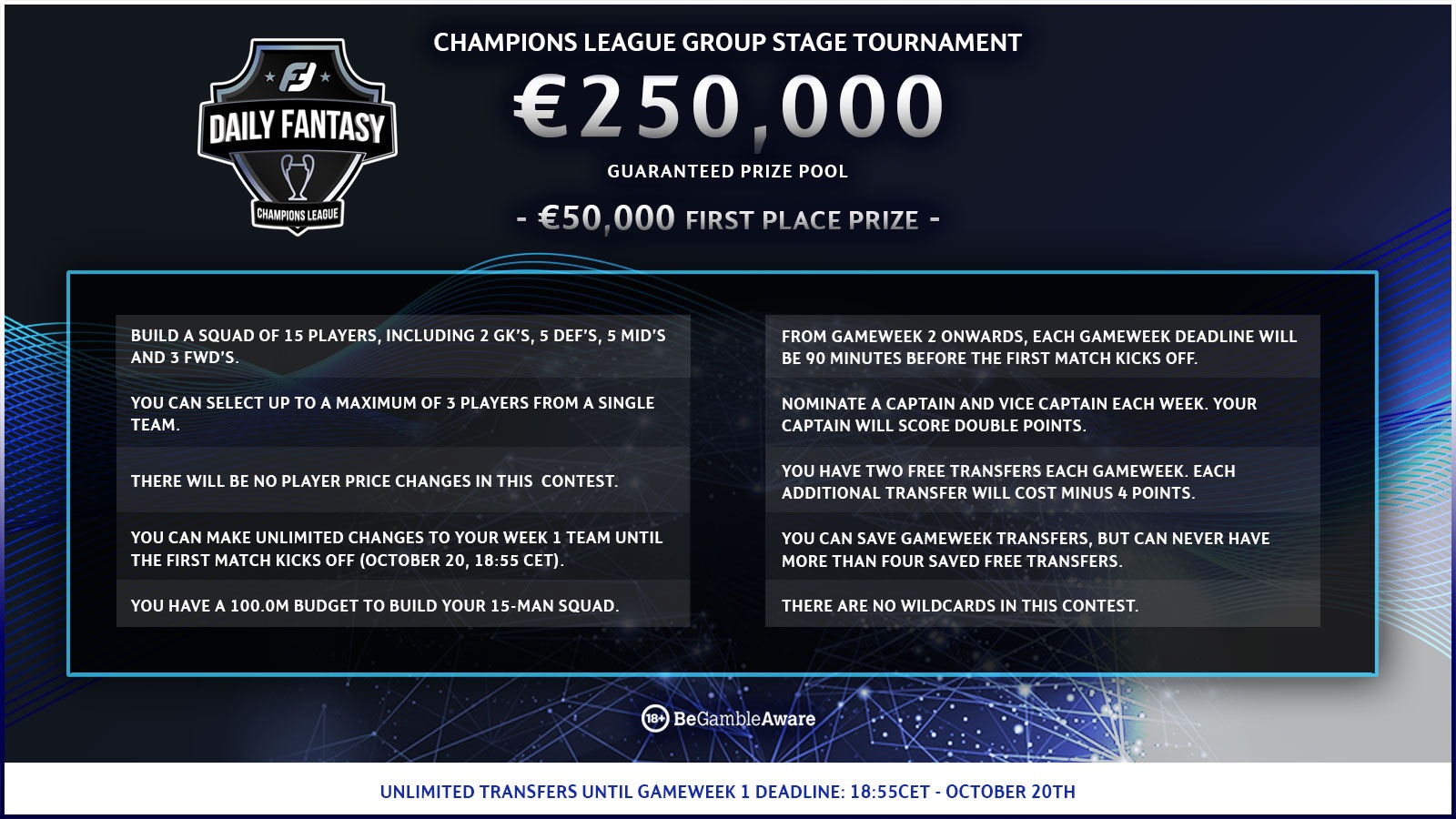 It’s also worth noting that you will have 2 free transfers available each Gameweek and any additional transfer will cost -4 points. It’s possible to save up to a maximum of 4 transfers.

You can make unlimited changes to your Gameweek 1 team until the first match kicks off at 17:55 BST on the 20th of October, 2020.

Please note that from Gameweek 2 onwards, the deadline will be 90 minutes before the first match kicks off – so don’t get caught out!

For anyone who plays the FanTeam 1M season-long Premier League game and FPL, the scoring system will be very familiar to you.

A goal scored is worth between 4 and 8 points, depending on the player’s position, whilst 3 points are awarded for an assist or fantasy assist.

A clean sheet earns 4 points for a defender or goalkeeper and 1 point for a midfielder, providing the player has played at least 60 minutes.

As you’d expect, yellow and red cards are penalised, as are missed penalties and own goals. 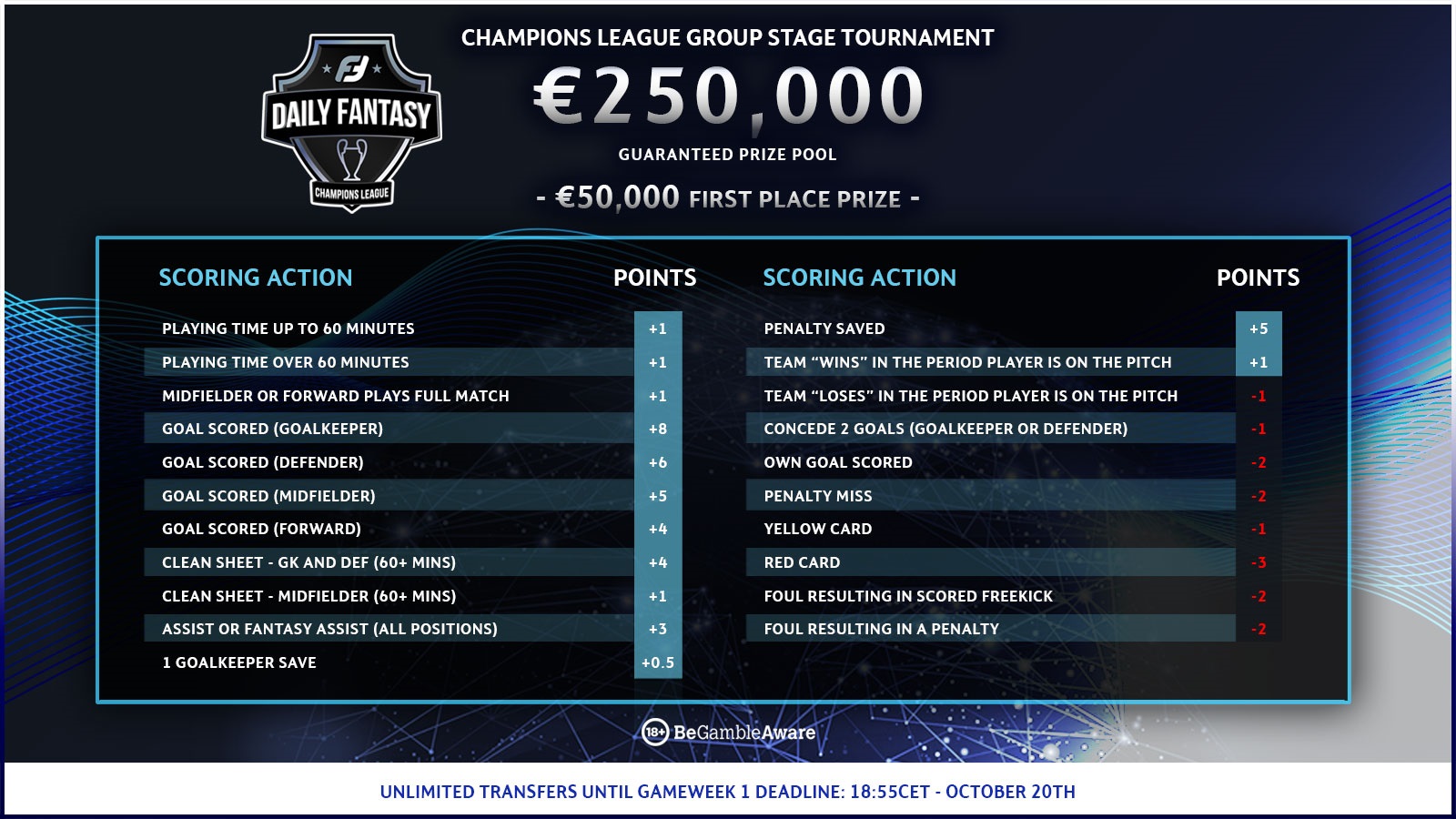 Additionally, a player receives -2 points for causing a penalty, or a free kick which leads to a direct goal, so try and avoid the clumsy centre-backs (no names mentioned)

Players are awarded 1 point if their team “wins” during the period they’re on the pitch, 0 if they “draw” and -1 point if they “lose”.

A full breakdown of our scoring system can be found on the FanTeam site and via the image above.

The guaranteed prize pool for FanTeam’s Champions League Group Stage fantasy football contest is €250,000 and as previously mentioned, the top 1,744 managers will win a cash prize. 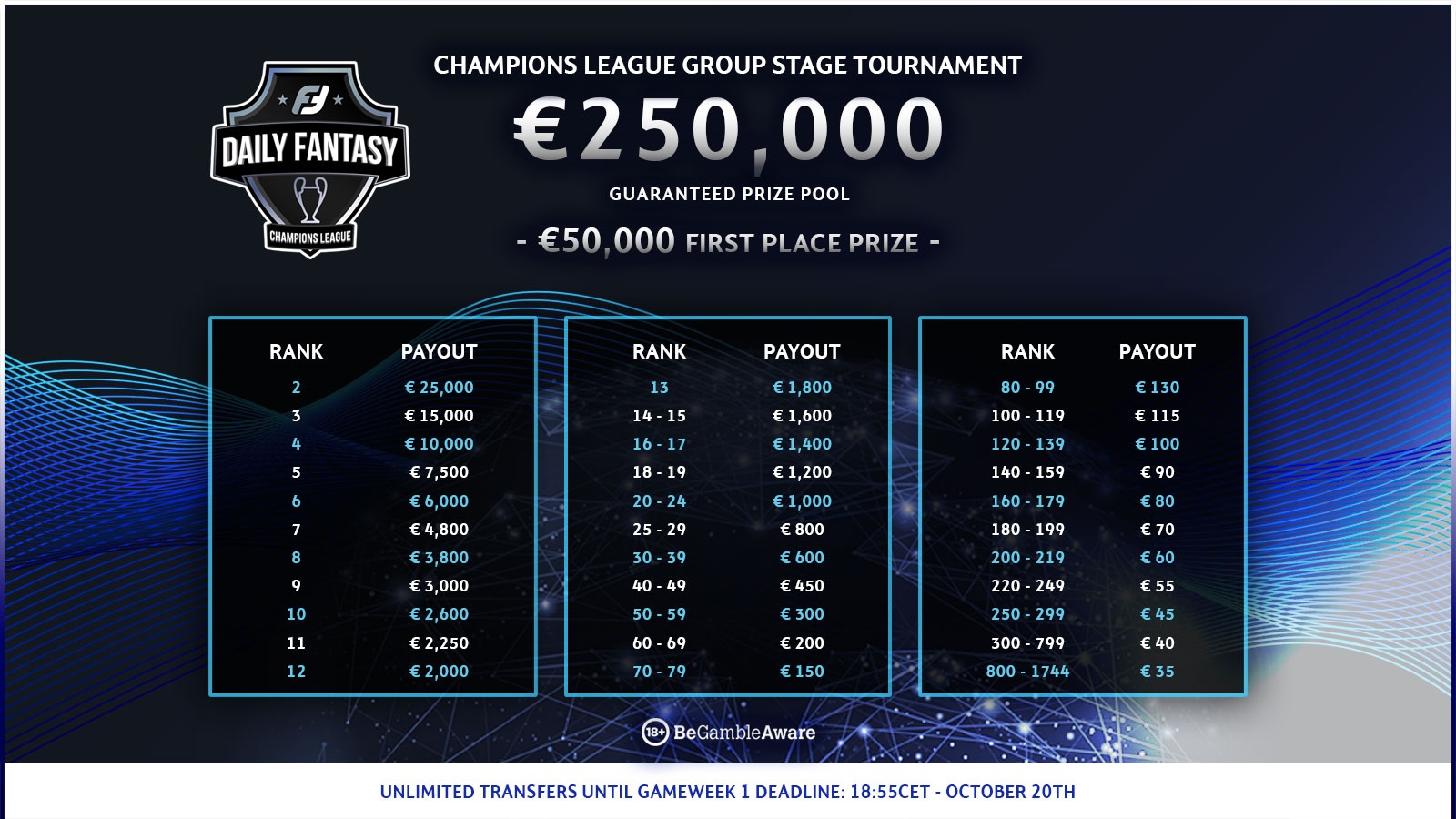 To create your account and enter this contest, head over to the FanTeam site here and click on the registration button. If you’re already an existing FanTeam customer, then you know what to do.

The €250,000 Champions League Group Stage tournament can be found in their Lobby, under the ‘Football’ tab and creating your team couldn’t be simpler, with familiar player pricing and multiple formations available.

As previously mentioned, players will not rise or fall in price; this allows you to budget accordingly for the weeks ahead without having to worry about risers and fallers.

Don’t forget to select a captain, as he will score you double points – and choose  a vice-captain for backup, just in case your captain fails to make an appearance.

Once you’re satisfied you’ve found the best combination of squad players, submit your team for an entry fee of just €25 and guide your team to a top cash payout place.

Put your Fantasy Premier League football skills to the test and turn €25 into a €50,000 payday, exclusively on FanTeam.

The contest is now open for you to begin building your lineups and it’s also worth telling you that multi-entry is available for this contest – each additional team will of course cost you €25.

[Please note that FanTeam is a strictly 18+ website and begambleaware.org is available]