When it comes to playing Fantasy Premier League, @FPLHints asks: “which formation is likely to give you the highest returns?”

This all stems from one simple fact in FPL – premium attackers and forwards, as a whole, score more points than premium defenders and goalkeepers.

But you can’t get them all and they can malfunction more often than not.

Additionally, you can’t rely on ‘poundshop defenders’ this season to unlock funds upfront. It seems that no £4.0M priced defender will even start Gameweek 1.

Put simply, there’s no money magic tree in FPL and it may be harder to get a true ‘Power 7’ than earlier seasons.

It’s all the more frustrating when a Premier League team has a plethora of attacking options and picking their premium attackers becomes like a game of Russian roulette – Liverpool of last season is a case in point with Mane, Firmino, Coutinho and Lallana’s returns being hard to predict.

With the annual inflation of prices for premium players and a completely frozen budget of £100m, I feel constrained.

We all need to overcome this ‘FPL austerity’ by thinking differently and by taking a risk or two. But before I explore some examples, I have been on the record to say that unorthodox formations don’t win you FPL titles.

This is a matter of fact and I wouldn’t advocate this quirky approach for the season. But we’re all on a level playing field during pre-season and at Gameweek 1, with form being irrelevant right now.

This is the best time to take risks as you don’t have much to lose and if it all goes horribly wrong, you can tidy it all up with your wildcard during the first or second international break.

It’s for this very reason that I propose exploring alternative formations beyond the usual run of the mill offerings.

Maybe it’s not bad if we start four or even five at the back, especially with those defenders that can attain at least 20 fantasy returns (clean sheet, assist or goal) per season. Perhaps we can make do with three or even two midfielders.

With a bit of imagination and open-mindedness this can make sense. But first, I will happily moan if FPL get it wrong on any key decision.

Yet, I have to say to the benefit of millions of managers they got it spot on by reclassifying Milner as a defender and retaining Alonso as a defender. This has also opened the door for me into different formations which I usually wouldn’t consider.

All of this leads to one simple notion. Perhaps we should consider trusting premium defenders a little bit more. I think this is possible and could lead to a newly created ‘Power 8’ core, which is inclusive of 4 or 5 defenders at the back.

In fact, here are some illustrations of what can be achieved. 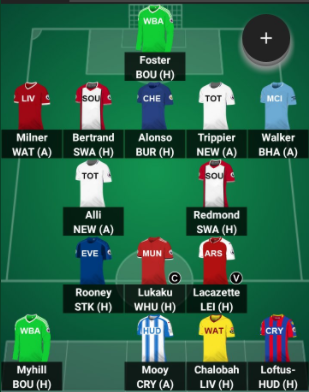 This is probably the least used formation in FPL. In fact, I have never used it and can’t think of a time in which auto-subs forced me to use it either.

It’s probably the most boring formation too, as you will literally be hoping for clean sheets every weekend, which is a bit dull.

However, most of the players shown have good initial fixtures. Even if Liverpool sign a natural left-back before Gameweek 1, I believe Milner will then play ‘out of position’ as a midfielder and will become coveted if he remains on penalties.

I would be happier buying Milner than Wijnaldum or Lallana due to the stated reasons and his cheaper price.

Mooy could also start in this example, but Remond and Alli would get the nod due to their fixtures and FPL experience. 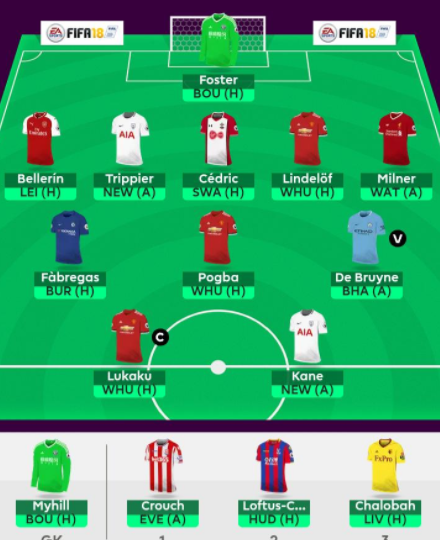 This formation also accommodates for a ‘five man defence’, but is more appealing if you want an additional premium midfielder.

As Waseem Karodia has demonstrated this can be quite interesting.

In his example, this approach is appealing if Fabregas starts in Hazard’s absence and if Pogba links up and plays in an advanced role with Lukaku.

He’s even managed to throw in Crouch for good measure.

This is definitely a good starting point for those open-minded to four or more defenders starting in their team.

It’s tempting the more you look at that front 5, isn’t it? Read on…

Run the risk without having the ‘power hitters’?

This may come as a shock to many, but as things stand, I don’t think seasoned FPL points’ heroes such as Aguero, Sanchez or Kane are altogether must haves from Gameweek 1.

Firstly, Aguero’s place has been somewhat undermined upfront since the arrival of Jesus. I would rather have the Brazilian in my team.

Unless, Aguero’s alleged move to Chelsea materialises, I can’t see why I should start him in FPL when he is no longer the sole attacking linchpin at City.

As for Sanchez, he’s had a fourth consecutive summer in which he has played in a tournament for Chile. By all means he ended 16/17 superbly and I captained him for the last three Gameweeks.

But I feel that he may be given extended time to recover from the Confederations Cup and wouldn’t be too surprised if he didn’t start in Gameweek 1.

I would rather consider Lacazette with his status as Arsenal’s main striker. This is despite the fact that he’s untested in the Premier League.

Lastly and most controversially, ‘Sir Harold’ Kane is another one that you could potentially do without from the onset. Of course, Spurs have a good run of initial fixtures.

However, all of their home games will take place at Wembley, which didn’t work out for them too well during their European games in 16/17. In addition, I can’t recall of a single season in which Kane has scored during August in the Premier League.

Of course, unlike Sanchez, he has been fully rested this summer. But could you do without Kane and offset that by having Alli and another Spurs player in Gameweek 1 or 2? Probably,yes.

I would be more comfortable buying him once he scores his first of the season and after Spurs have shown that they have adapted to playing at Wembley.

We need to be careful when looking at last year’s player stats and before developing an affinity to premium defenders. Just because a defender bagged half a dozen goals or assists in one season doesn’t mean he will do it every season.

Such stats should rather be an indicator of their prowess.

In addition, from previous stats that I have seen there doesn’t tend to be tons of clean sheets historically speaking in the first few Gameweeks. You will be stung badly if you have 5 premium defenders who all concede and fail to bag any attacking returns.

All this talk about risk taking and doing something other than having a template team is only worth it if you plan on using your wildcard early (anytime from the first to second international break).

By then you will be able to gauge who the form players are and will naturally settle down with a more conventional formation. Go for safer ‘shield picks’ if your first wildcard is going to be used a lot further down the line.

I think a #FiveManDefence in FPL solely made up of premium and attacking defenders is an interesting concept, especially when some of these players out-pointed midfielders with values of £7.5M+ in FPL last season.

But you would need 2 premium strikers and at least 2 premium midfielders for it to have a chance and your bench would be restricted to the cheapest available players.

I’m almost certainly not going to opt for 3-5-2 or 3-4-3 in Gameweek 1. I’m willing to give premium defenders a chance (especially ‘out of position’ / set-piece takers) with at least four at the back. Perhaps 4-3-3 may be my answer.

Who knows, it’s still early days and I reserve the right to change my mind, as do you.

Tinker with your team as you see fit, and remember, you alone will ultimately decide on your own formation and player picks. Good luck and have a good 17/18 filled with assists, baps and green arrows!

Thank you for reading ‘Fantasy Premier League Tips: Unorthodox FPL formations and alternative team selections’ which was written and produced by @FPLHints

BEFORE YOU DISAPPEAR: We’re hosting our own league over at Football Survivor this season. Once again, it’s completely free to enter and one lucky winner will take home a copy of FIFA 18.

Join us in the FFP league by clicking the banner below. Don’t forget to join before 11th August to be sure you don’t miss out.