Who to put in your Fantasy Football Team? Here's the Pundits' XI with inclusions from Liverpool & Manchester United

If you’re not familiar with FanTeam, they’re offering a season-long Fantasy Premier League game with a GUARANTEED prize pool of €250,000.

If you’d like a bit more detail, we can bring you up to speed through our series of articles to date. You can find the initial overview of the game here, a breakdown of the prizes here, and the rule similarities and differences with regards to FPL here.

For now, let’s crack on with draft 2, shall we?

To start with, let’s remind ourselves of where we left off – it looked like this, but since settling on the below, the fantasy football landscape has changed somewhat… 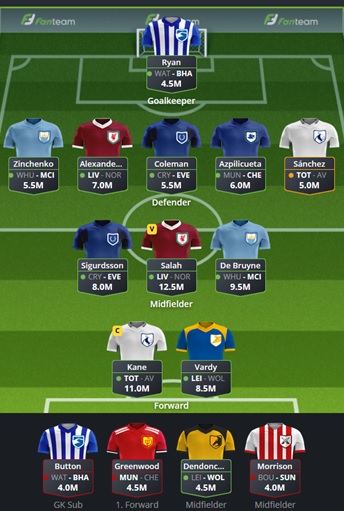 So what’s changed? Well quite a bit actually, so et’s go through each transfer:

Dean Henderson is only 4.0M on FanTeam so was a no brainer, we also like the look of Heaton following his transfer fro Burnley to Villa so the Brighton duo depart, and for the same price we have two starting keepers!

We’ve been given the jitters when it comes to TAA and his rotation fears following the Community Shield, so we’ve decided to play it safe and opt for Robertson instead.

The same goes for Coleman following Everton’s capture of Djibril Sidibie, so he’s upgraded for his fellow Toffee in Lucas Digne.

We swap blue Manchester for red Manchester in our 5.5M slot, as AWB comes in as a longer term pick over Zinchenko.

Finally, it looks like Rico will be given the chance to start at left back for Bournemouth and is only a bench filler anyway.

As much as we all love KDB, there’s no doubting that Sterling is the most explosive option in the Manchester City midfield so we decided that along with Salah, he’s our man.

Perez comes in as an upgrade as we’ve shifted the money around to afford Sterling. We’ve also swapped bench fodder in midfield, with Drinkwater looking like a good signing for Burnley.

We had to fund the Sterling move somehow, and unfortunately it’s Kane who makes way.

We’d have loved to have kept him, but ultimately he was our only realistic way of raising the Sterling capital.

He makes way for Jota who looks blisteringly hot in pre-season. Callum Wilson also feels like a good addition as we’ve kept Leicester attack with Perez but got some much needed Bournemouth cover with Wilson.

Here’s how that leaves us looking, ladies and gents – the Pundits’ FanTeam XI draft 2: 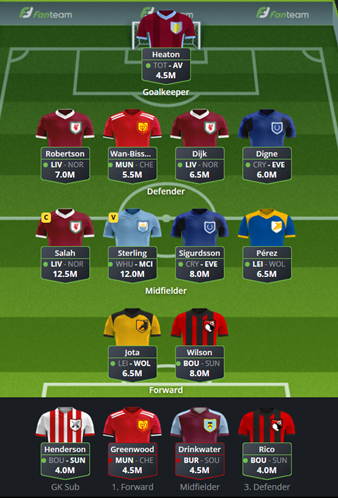 So, there we have it Fantasy Premier League bosses – our Fantasy Football Pundits Staff Team is now locked in to FanTeam’s €250,000 cash league, which starts at 8pm on Friday the 9th when Liverpool kick the season off against Norwich City.

There’s a cool €50,000 for first place prize and the top 1250 places are paid out! What’s even better is that only 600 managers have entered, so you’ve a fantastic chance of finishing in the cash places.