I, @FFPundits_Drew am pleased to announce that this summer, Starting 11 are bringing LIVE daily play fantasy football to the World Cup!

Starting 11 are offering Daily Fantasy Football contests throughout the World Cup, which means as well as some familiar faces – we will also be treated to selecting the likes of Ronaldo, Messi and Neymar; possibly in the same team.

The main difference for me with Starting 11 is that it’s pressure free, with no forward planning – take a few gambles and enjoy yourself.

Be sure to check out their How to Play video below, or, continue to read on for all the information you’ll need to get involved with us this summer.

For those of you who have played before, the basic game-play remains the same – either Browse Games or Create a New Game yourself.

1 vs 1 is a classic head-to-head game where two fantasy bosses can challenge each other and whether you are competing for cash or for bragging rights – losing just isn’t an option!

Private games are available under this option and ideal if you are at home watching the World Cup live with friends.

Winner Take All does exactly what its name suggests – up to TEN Fantasy bosses do battle in the ultimate Starting 11 contest where the prize for victory can be huge – particularly in cash games.

Remember – there can only be one winner!

50/50 contests are for those who enjoy the larger contests but maybe want to edge their bets a little – you are going to have to share your victory here, but with improved chances of success.

Half of the competitors will lose,whilst  the other half will win – ideal for those learning the ropes before moving on to Winner Takes All contests.

This is YOUR fantasy team – and only YOU can decide who will make it into YOUR lineup?

Starting 11 offers a number of formation options to choose from – simply select the players you want for each position and play about with it until you’re happy.

There are no team-budget restrictions here so enjoy unrestricted access to some of the world’s elite players, all in one team!

Like the majority of fantasy games, there is the key decision of who you will entrust with that invaluable captain’s armband – DOUBLE POINTS are on offer here so choose wisely fantasy bosses.

Remember, you can make changes to your lineup right up to kick-off – has a tempting differential been brought into the starting line-up at the last-minute? Bring him in!

The first game kicks off and your fantasy gameweek is underway – once matches begin, you’ll be able to see your players accumulate points in real-time.

Have you managed to sneak an early lead over your rivals? Track your progress via the live leader-boards on the iOS and Android apps.

To check this, you can view all of your contests in the Game Centre – tap on a contest to view your lineup and see how your individual players are performing, in real-time.

Enjoy the thrill of your captain earning you double points in the last minutes of a game, as your team climbs up the live leader-board and grabs a cash prize. 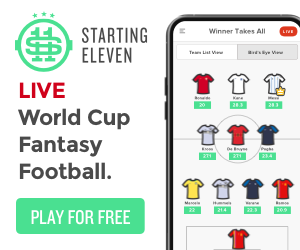 The fridge is well stocked and you’re watching LIVE World Cup football – life is good; but your players are under-performing and you need goals and assists to regain the advantage in your entered leagues.

It’s time to take control of your squad in-play, with up to three substitutions at your disposal – even if your player has limped off injured, SWAP HIM OUT!

Has your defender lost his clean sheet early on? Swap him out for a more attacking option – formation changes are allowed, as long as you meet the original formation rules.

Is your star striker is letting nerves get the better of him under the pressure of the big occasion?  Swap him for that teenager who looks like he is ready to make a name for himself.

If you’re interested in playing World Cup Daily Fantasy Football with us and many other FPL community members this summer, please download the FREE Starting 11 app today by clicking the banner below – available on Android & iOS.